Design goals :Three of these goals are summarized below.

The product that comes out first can win the market, even setting customer preferences for future generations of the product. The profitable market life for some products is 3–6 months—if you are 3 months late, you will never make money.

In some categories,the competition is against the calendar,not just competitors.

Calculators, for example, are disproportionately sold just before school starts in the fall.

If you miss your market window, you have to wait a year for another sales season.

The costs of designing the system are distinct from manufacturing cost—the cost of engineers’ salaries, computers used in design, and so on must be spread across the units sold.

Design costs can also be important for high-volume consumer devices when time-tomarket pressures cause teams to swell in size.

Customers not only want their products fast and cheap, they also want them to be right.

A design flow is a sequence of steps to be followed during a design.

Some of the steps can be performed by tools,such as compilers or CAD systems;other

steps can be performed by hand. In this section we look at the basic characteristics of design flows. 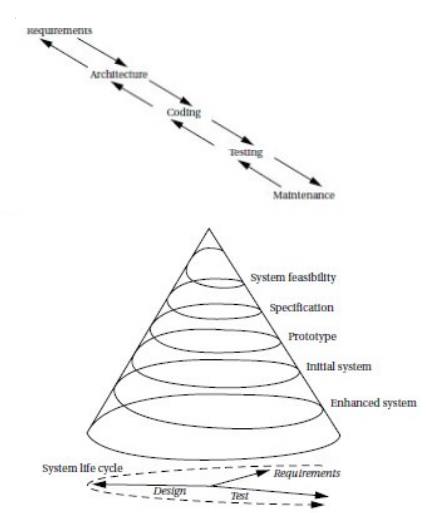 In this approach, the system is built several times.

A first system is used as a rough prototype, and successive models of the system are further refined. This methodology makes sense when you are relatively unfamiliar with the application domain for which you are building the system.

Refining the system by building several increasingly complex systems allows you to test out architecture and design techniques.

The various iterations may also be only partially completed;for example,continuing an initial system only through the detailed design phase may teach you enough to help you avoid many mistakes in a second design iteration that is carried through to completion.

Even if you aren’t designing a board, you may be selecting boards and plugging together multiple hardware components as well as writing code

Concurrent engineering attempts to take a broaderapproach and optimize the total flow.

Reduced design time is an important goal for concurrent engineering, but it can help with any aspect of the design that cuts across the design flow, such as reliability, performance, power consumption, and so on. 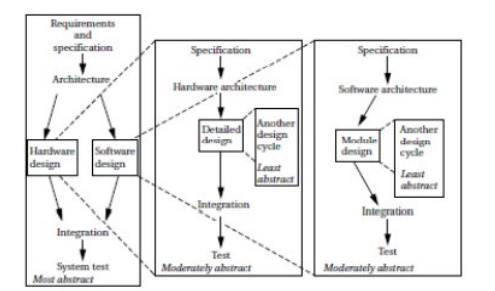 performs an isolated task and then throws the result over the wall to the next designer, with little interaction between the two.

In particular, reaping the most benefits from concurrent engineering usually requires eliminating thewall between design and manufacturing.

■               Cross-functional teams include members from various disciplines involved in the process, including manufacturing, hardware and software design, marketing, and so forth.

■               Concurrent product realization process activities are at the heart of concurrent engineering. Doing several things at once, such as designing various subsystems simultaneously, is critical to reducing design time.

■               Incremental information sharing and use helps minimize the chance that concurrent product realization will lead to surprises. As soon as new information becomes available, it is shared and integrated into the design. Cross functional teams are important to the effective sharing of information in a timely fashion.

■               Integrated project management ensures that someone is responsible for the entire project, and that responsibility is not abdicated once one aspect of the work is done.

Early and continual supplier involvement helps make the best use of suppliers’ capabilities.

Requirements are informal descriptions of what the customer wants, while specifications are more detailed, precise, and consistent descriptions of the system that can be used to create the architecture.

Both requirements and specifications are, however, directed to the outward behavior of the system, not its internal structure. The overall goal of creating a requirements document is effective communication between the customers and the designer

A good set of requirements should meet several tests:

Unambiguousness: The requirements document should be clear and have only one plain language interpretation.

■               Verifiability: There should be a cost-effective way to ensure that each requirement is satisfied in the final product. For example, a requirement that the system package be “attractive” would be hard to verify without some agreed upon definition of attractiveness

■               Modifiability: The requirements document should be structured so that it can be modified to meet changing requirements without losing consistency, verifiability, and so forth.

We should be able to trace backward from the requirements to know why each requirement exists.

(e.g., marketing memos) to understand how they relate to the final requirements.

We should be able to trace forward to understand how each requirement is satisfied in the implementation.

We should also be able to trace backward fromthe implementation to know which requirements they were intended to satisfy.

We have already seen how to use state machines to specify control in UML.

SDL specifications include states, actions, and both conditional and unconditional transitions between states. SDL is an event-oriented state 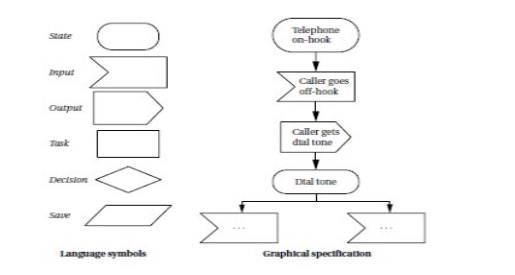 The Statechart is one well-known technique for state-based specification that introduced some important concepts.

Statecharts allow states to be grouped together to show common functionality.

There are two basic groupings: 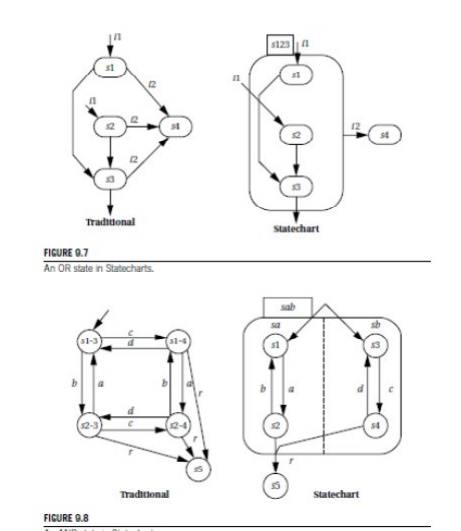 the AND/OR table, to describe similar relationships between states. An example AND/OR table and the Boolean expression it describes are shown in Figure.

The CRC card methodology is a well-known and useful way to help analyze a system’s structure.

The acronym CRC stands for the following three major items that the methodology tries to identify:

■ Classes define the logical groupings of data and functionality.

The name CRC card comes from the fact that the methodology is practiced by having people write on index cards. (In the United States,the standard size for index cards is 3”x5”inches), An example card is shown in Figure

The walkthrough process used with CRC cards is very useful in scoping out a design and determining what parts of a system are poorly understood.

This informal technique is valuable to tool-based design and coding following steps are followedwhen using it to analyze a system:

Develop an initial list of classes: Write down the class name and perhaps a few words on what it does.

Create some usage scenarios: These scenarios describe what the system does.

Walk through the scenarios: This is the heart of the methodology. During the walkthrough, each person on the team represents one or more classes.

Refine the classes, responsibilities, and collaborators: Some of this will be done during the course of the walkthrough, but making a second pass after the scenarios is a good idea

The quality assurance (QA) process is vital for the delivery of a satisfactory system.

ISO 9000 was created to apply to a broad range of industries, including but not limited to embedded hardware and software.

However, a wide-ranging standard such as ISO 9000 cannot specify the detailed standards for every industry.