1. Why current is a scalar?

Though current has a specific direction and magnitude, it does not obey the law of vector addition. So current is a scalar quantity.

❖ The current density (J) is defined as the current per unit area of cross section of the conductor.

❖ It is a vector quantity.

3. Distinguish between drift velocity and mobility. 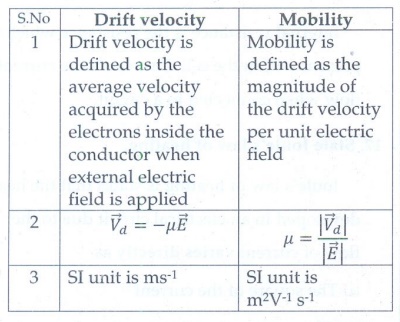 1. Drift velocity is defined as the average velocity acquired by the electrons inside the conductor when external electric field is applied

1. Mobility is defined as the magnitude of the drift velocity per unit electric field

Microscopic form of ohm's law states that at a constant temperature the current density in a conductor is directly proportional to the applied electric field.

6. What are ohmic and non ohmic devices?

❖ Devices that obey's ohm's law are said to be ohmic. For these devices the plot of current against voltage graph is a straight line

❖ Devices that do not obey's ohm's law are said to be non-ohmic. For these devices the plot of current against voltage graph is non linear ie., they do not have a constant resistance.

The electrical resistivity of a material is defined as the resistance offered to current flow by a conductor of unit length having unit area of cross section.

Its unit is per °C

The resistance of certain materials become zero below certain temperature Tc. This temperature is known as critical temperature or transistion temperature. The materials which exhibit this property are known as superconductors. This phenomenon is called super conductivity.

10. What is electric power and electric energy?

❖ The electrical energy is defined as the ability to do electrical work . Its unit is watt hour or kWh (or) joule.

11. Derive the expression for power P=VI in electrical circuit. 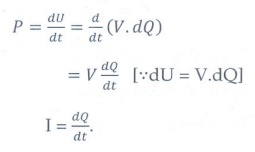 Since the electric current I = dQ/dt

12. Write down the various forms of expression for power in electrical circuit.

Here P, V, I, R is the power, Voltage, Current and Resistance respectively.

Kirchhoff's current rule states that the algebraic sum of the currents at any junction of a circuit is zero. It is a statement of conservation of electric charge.

Kirchhoff's voltage rule states that in a closed circuit the algebraic sum of the products of the current and resistance of each part of the circuit is equal to the total emf included in the circuit. This rule follows from the law of conservation of energy.

15. State the principle of potentiometer.

The emf of the cell is directly proportional to the balancing length.

16. What do you mean by internal resistance of a cell?

Internal resistance is the resistance which is present within the cell that resists the current flow when connected to a circuit.

(i) The square of the current

(ii) The resistance of the circuit and

18. What is Seebeck effect?

Seebeck discovered that in a closed circuit consisting of two dissimilar metals, when the junctions are maintained at different temperatures an emf (potential difference) is developed. This is called Seebeck effect. This effect is reversible.

19. What is Thomson effect?

Thomson showed that if two points in a conductor are at different temperatures, the density of electrons at these points will differ and as a result the potential difference is created between these points. Thomson effect is also reversible.

20. What is Peltier effect?

When an electric current is passed through a circuit of a thermocouple, heat is evolved at one junction and absorbed at the other junction. This is known as Peltier effect. Peltier effect is reversible.

21. State the applications of Seebeck effect.

(2) This effect is utilized in automobiles as automotive thermoelectric generators for increasing fuel efficiency.

(3) Seebeck effect is used in thermocouples and thermopiles to measure the temperature difference between the two objects.

1. Describe the microscopic model of current and obtain general form of Ohm’s law

3. Explain the equivalent resistance of a series and parallel resistor network

4. Explain the determination of the internal resistance of a cell using voltmeter.

6. Obtain the condition for bridge balance in Wheatstone’s bridge.

8. How the emf of two cells are compared using potentiometer?