The ARM processor is widely used in cell phones and many other systems.

Embedded processors can be broken into two broad categories: ordinary microprocessors (μP) and microcontrollers (μC), which have many more peripherals on chip, reducing cost and size.

Contrasting to the personal computer and server markets, a fairly large number of basic CPU architectures are used; there are Von Neumann as well as various degrees of Harvard architectures, RISC as well as non-RISC and VLIW; word lengths vary from 4-bit to 64-bits and beyond (mainly in DSP processors) although the most typical remain 8/16-bit. Most architecture comes in a large number of different variants and shapes, many of which are also manufactured by several different companies. e.g ARM

The ARM processor is widely used in cell phones and many other systems.

These machines provided a variety of instructions that may perform very complex tasks, such as string searching; they also generally used a number of different instruction formats of varying lengths.

These computers tended to provide somewhat fewer and simpler instructions it.

Assembly language has the following features:

 One instruction appears per line.

  Labels, which give names to memory locations, start in the first column.

  Instructions must start in the second column or after to distinguish them from labels.

  Comments run from some designated comment character (; in the case of ARM) to  the end of the line

Assemblers must also provide some pseudo-ops to help programmers create complete assembly language programs.An example of a pseudo-op is one that allows data values to be loaded into memory locations.These allow constants,for example, to be set into memory. TheARM % pseudo-op allocates a block of memory of the size specified by the operand and initializes locations to zero.

ARM is actually a family of RISC architectures that have been developed over many years. ARM does not manufacture its own VLSI devices; rather, it licenses its architecture to companies who either manufacture the CPU itself or integrate the ARM processor into a larger system.

The textual description of instructions, as opposed to their binary representation, is called an assembly language. ARM instructions are written one per line, starting after the first column. Comments begin with a semicolon and continue to the end of the line. A label, which gives a name to a memory location, comes at the beginning of the line, starting in the first column

The standardARM word is 32 bits long.

ü    The word may be divided into four 8-bit bytes

ARM7 allows addresses up to 32 bits long.An address refers to a byte,not a word.Therefore, the word 0 in the ARM address space is at location 0, the word 1 is at 4, the word 2 is at 8,and so on.

ü   big-endian mode (the lowest-order byte stored in the highest bits of the word), 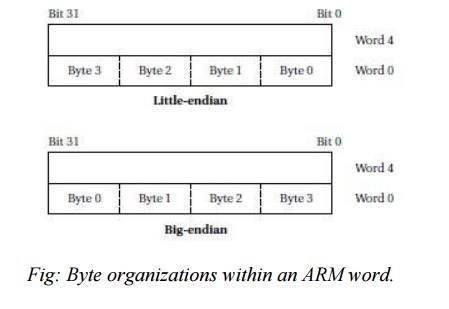 Arithmetic and logical operations in C are performed in variables. Variables are implemented as memory locations.

Sample fragment of C code with data declarations and several assignment statements. The variables a, b, c, x, y, and z all become data locations in memory. In most cases data are kept relatively separate from instructions in the program’s memory image. In the ARM processor, arithmetic and logical operations cannot be performed directly on memory locations. While some processors allow such operations to directly reference main memory,

ARM is a load-store architecture—data operands must first be loaded into the CPU and then stored back to main memory to save the results.

Following Fig shows the registers in the basic ARM programming model. ARM has 16 general-purpose registers, r0 through r15. Except for r15, they are identical—any operation that can be done on one of them can be done on the other one also. The r15 register has the same capabilities as the other registers, but it is also used as the program counter 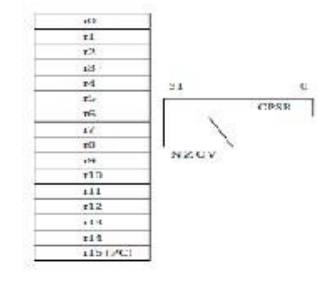 The other important basic register in the programming model is the current program status register (CPSR). This register is set automatically during every arithmetic, logical, or shifting operation. The top four bits of the CPSR hold the following useful information about the results of that arithmetic/logical operation:

■ The negative (N) bit is set when the result is negative in two’s-complement arithmetic.

■ The zero (Z) bit is set when every bit of the result is zero.

■ The carry (C) bit is set when there is a carry out of the operation.

■ The overflow(V) bit is set when an arithmetic operation results in an overflow. 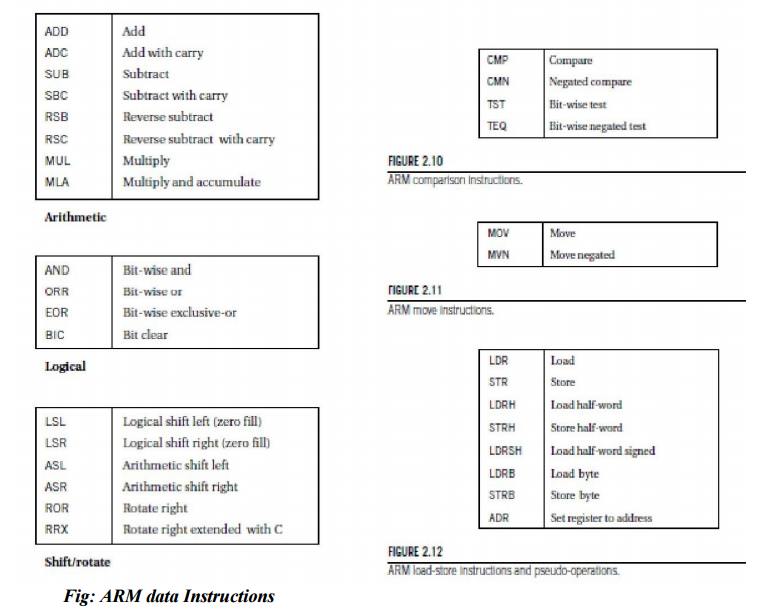 ·         The ARM load and store instructions do not directly refer to main memory addresses, since a 32-bit address would not fit into an instruction that included an opcode and operands. Instead, the ARM uses register-indirect addressing.

We will use the assignments of Figure 2.7. The semicolon (;) begins a comment after an instruction, which continues to the end of that line. The statement

can be implemented by using r0 for a, r1 for b, r2 for c, and r3 for x . We also need registers for indirect addressing. In this case, we will reuse the same indirect addressing register, r4, for each variable load. The code must load the values of a, b, and c into these registers before performing the arithmetic, and it must store the value of x back to memory when it is done. This code performs the following necessary steps:

The B (branch) instruction is the basic mechanism in ARM for changing the flow of control. The address that is the destination of the branch is often called the branch target.

Branches are PC-relative—the branch specifies the offset from the current PC value to the branch target.

will add 400 to the current PC value. 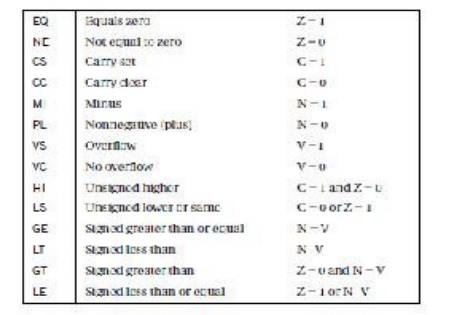 Implementing an if statement in ARM

We will use the following if statement as an example: if (a < b)

BGE fblock ; if a >= b, take branch the true block follows