8051 is an excellent device for building many embedded systems. One important factor is that the 8051 requires a minimum number of external components in order to operate.

Embedded processors can be broken into two broad categories: ordinary microprocessors (μP) and microcontrollers (μC), which have many more peripherals on chip, reducing cost and size.

Contrasting to the personal computer and server markets, a fairly large number of basic CPU architectures are used; there are Von Neumann as well as various degrees of Harvard architectures, RISC as well as non-RISC and VLIW; word lengths vary from 4-bit to 64-bits and beyond (mainly in DSP processors) although the most typical remain 8/16-bit. Most architecture comes in a large number of different variants and shapes, many of which are also manufactured by several different companies. e.g ARM

8051 is an excellent device for building many embedded systems. One important factor is that the 8051 requires a minimum number of external components in order to operate.

It is a well-tested design; introduced in its original form by Intel in 1980 the development costs of this device now start at less than US $1.00. At this price, you get a performance of around 1 million instructions per second, and 256 bytes (not megabytes!) of on-chip RAM, 32 port pins and a serial interface.

The main features of 8051 microcontroller are:

Harvard Memory Architecture – It has 16 bit Address bus (each of RAM and ROM) and 8 bit Data Bus.

8051 can execute 1 million one-cycle instructions per second with a clock frequency of 12MHz.

a single chip. The Block Diagram of 8051 Microcontroller is as shown in Figure 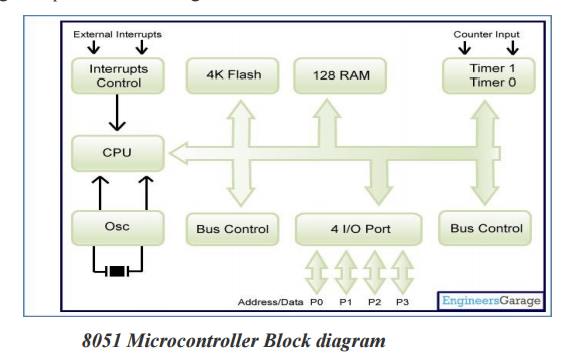 The following is the Pin diagram of 8051 microcontroller. 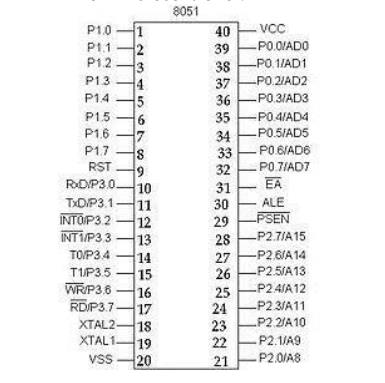 PIN 9: PIN 9 is the reset pin which is used to reset the microcontroller’s internal registers and ports upon starting up. (Pin should be held high for 2 machine cycles.)

PINS 18 & 19: The 8051 has a built-in oscillator amplifier hence we need to only connect a crystal at these pins to provide clock pulses to the circuit.

PINS 29, 30 & 31: As described in the features of the 8051, this chip contains a built-in flash memory. In order to program this we need to supply a voltage of +12V at pin 31. If external memory is connected then PIN 31, also called EA/VPP, should be connected to ground to indicate the presence of external memory. PIN 30 is called ALE (address latch enable), which is used when multiple memory chips are connected to the controller and only one of them needs to be selected. PIN 29 is called PSEN. This is "program store enable". In order to use the external memory it is required to provide the low voltage (0) on both PSEN and EA pins.

PORT P1 (Pins 1 to 8): The port P1 is a general purpose input/output port which can be used for a variety of interfacing tasks. The other ports P0, P2 and P3 have dual roles or additional functions associated with them based upon the context of their usage.

PORT P2 (pins 21 to 28): PORT P2 can also be used as a general purpose 8 bit port when no external memory is present, but if external memory access is required then PORT P2 will act as an address bus in conjunction with PORT P0 to access external memory. PORT P2 acts as A8-A15, as can be seen from fig 1.1

The external interface of the Standard 8051

Low-cost members of the 8051 family with reduced number of port pins, and no support for off-chip memory. Typical application: Low-cost consumer goods.

‘Reset routine’ must be run to place hardware into an appropriate state before it can begin executing the user program. Running this reset routine takes time, and requires that the microcontroller’s oscillator is operating.

Where system is supplied by a robust power supply, which rapidly reaches its specified output voltage when switched on, rapidly decreases to 0V when switched off, and – while switched on – cannot ‘brown out’ (drop in voltage), then we can safely use low-cost reset hardware based on a capacitor and a resistor to ensure that system will be reset correctly: this form of reset circuit is shown in Figure 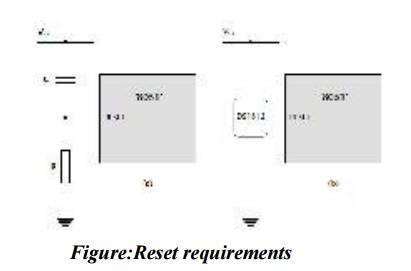 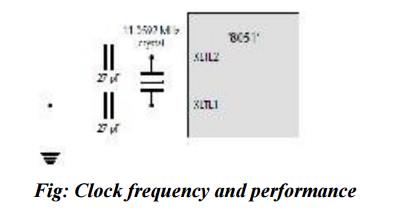 A. Types of memory

Dynamic RAM is a read-write memory technology that uses a small capacitor to store information.

No refreshing is required

Mask ROM is – from the software developer’s perspective – read only; A ‘mask’ is provided by the company for which the chips are being produced. Such devices are therefore sometimes referred to as ‘factory programmed”.

PROM is a form of Write-Once, Read-Many (WORM) or ‘One-Time Programmable’ (OTP) memory. Basically, we use a PROM programmer to blow tiny ‘fuses’ in the device.

UV EPROMs are programmed electrically. Unlike PROMs, they also have a quartz window which allows the memory to be erased by exposing the internals of the device to UV light.

Electrically-Erasable Programmable Read-Only Memory (EEPROMs) and ‘Flash’ ROMs are a more user-friendly form of ROM that can be both programmed and erased electrically. EEPROM and Flash ROM are very similar. EEPROMs can usually be reprogrammed on a byte-by-byte basis, and are often used to store passwords or other ‘persistent’ user data. Flash ROMs generally require a block-sized ‘erase’ operation before they can be programmed.

b) Memory organization and ‘hex’

All data items are represented in computer memory as binary codes, each containing a certain number of bits. To simplify the storage and retrieval of data items, these memory bits are organized into memory locations, each with a unique memory address. The other Memory representations are shown

There are two distinct memory regions in an 8051 device: the DATA area and the CODE area.

The compiler avoids confusion if 0x24 in bit address and byte address.

ü   CODE memory :CODE area is used to store the program code, usually in some form of ROM. The CODE area may also contain read-only variables (‘constants’), such as filter co-efficients   or data for speech playback.

An ‘8-bit microcontroller’ refers to the size of the registers and data bus. This means that the family will handle 8-bit data very quickly and process 16-bit or 32-bit data rather less efficiently. The 16-bit address space means that the device can directly address 216 bytes of memory: that is, 64 kbytes.

Most 8051s have four 8-bit ports, giving a total of 32 pins you can individually read from or control. All of the ports are bidirectional: that is, they may be used for both input and output

All members of the 8051 family have at least two timer/counters, known as Timer 0 and Timer 1: most also have an additional timer (Timer 2). These are 16-bit timers, they can hold values from 0 to 65535 (decimal).There are many things we can do with such a timer:

It used to measure intervals of time. It can measure the duration of a function by noting the value of a timer at the beginning and end of the function call, and comparing the two

Use it to generate precise hardware delays.

Use it to generate ‘time out’ facilities: this is a key requirement in systems with real-time constraints.

Most important of all, we can use it to generate regular ‘ticks’, and drive an operating system

An interrupt is a hardware mechanism used to notify a processor that an ‘event’ has taken place: such events may be ‘internal’ events (such as the overflow of a timer) or ‘external’ events

(such as the arrival of a character through a serial interface).The original ‘8051’ (‘8052’) architecture supported seven interrupt sources: 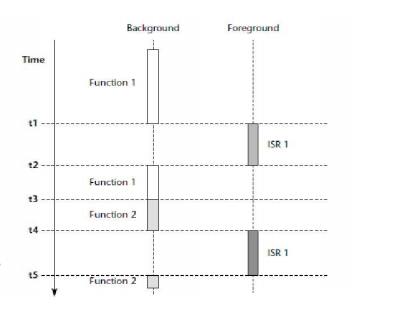 another interrupt is raised, this time dealt with by ISR 2.

Such an interface is common in embedded processors, and is widely used. Here are some examples:

The serial port may be used to debug embedded applications, using a desktop PC.

The serial port may be used to transfer data from embedded data acquisition systems to a PC, or to other embedded processors

All modern implementations of 8051 processors have at least three operating modes:

The ‘Idle’ and ‘Power Down’ modes are intended to be used to save power at times when no processing is required .We generally aim for an average power consumption of less than 10 mA.

Idle mode: In the idle mode the oscillator of the C501 continues to run, but the CPU is gated off from the clock signal. Rhe interrupt system, the serial port and all timers are connected to  the clock. The idle mode is entered by setting the flag bit IDLE (PCON.0). The easiest way is:

There are two ways as activating any enabled interrupt and Perform a hardware reset.

The power-down mode is entered by setting the flag bit PDE (PCON.1). This is done in ‘C’ as follows:

The only exit from power-down mode is a hardware reset.