Often it is easier to make observations on eukaryotic cells and then to prove the resulting ideas with experiments done on bacteria.

Often it is easier to make observations on eukaryotic cells and then to prove the resulting ideas with experiments done on bacteria. One direct demonstration of concomitant translation and excretion through a membrane was made in bacteria. Chains of a periplasmic protein in the process of being synthesized were labeled by a chemical that was excluded from the cytoplasm by the inner membrane. The experiment was done by adding the labeling chemical to spheroplasts. These are cells lacking their outer membrane and peptidyl-glycan layer. Shortly after adding the reactive labeling compound, membrane-bound ribo-somes were isolated and their nascent polypeptide chains were exam-ined and were found to be labeled. Proteins that are normally found in the cytoplasm were not similarly labeled.

Fortunately, E. coli has been sufficiently well studied that a number of candidates exist whose N-terminal sequences might be used in such a project. The malF gene product is a protein involved in the uptake of maltose into cells. It is located in the periplasmic space. This should be an excellent source of an “excretion-coding” N-terminal sequence. The ideal situation to test the excretion hypothesis would be to fuse the N-terminal sequence of malF to an easily assayed cytoplasmic protein. One very good candidate for this fusion is β-galactosidase, a protein for which the genetics have also been fully developed.

Remarkably, the fusion of the N-terminal portion of the malF gene to β-galactosidase was performed in vivo without using recombinant DNA techniques (Fig. 7.21). Through clever genetic manipulations, Silhavy and Beckwith moved the β-galactosidase gene, lacZ, near malF and then generated a deletion that fused the N-terminal portion of the malF gene toβ-galactosidase. A postulate of the signal peptide modelcould therefore be tested. Indeed, a sizable fraction of the β-galactosi-dase from some of the fusion strains was not located in the cytoplasm but instead was bound to or located within the inner membranes of the cells.

Figure 7.21 Construction of amalF-lacZ fusion. Theβ-galac-tosidase gene is first brought near the malF gene, and then a deletion between the two fuses the N-terminus of malF to lacZ.

How do you show that a protein is located in the inner membrane of a cell? One method is to disrupt cells, to collect membrane fragments, and then to separate the inner and outer membrane fragments and assay each for the protein. Inner membrane is less dense than outer mem-brane, and therefore the two can be separated according to density by isopycnic centrifugation in a tube containing a gradient of sucrose concentration (Fig. 7.22). The two membrane fractions sediment down the tube into higher and higher sucrose concentrations until they reach positions where their densities equal the density of the sucrose. There they come to rest. By assay of the fractions collected from such a sucrose gradient, the β-galactosidase from a malF-lacZ fusion could be demonstrated to be located largely in the inner membrane of the cells (Fig. 7.23). 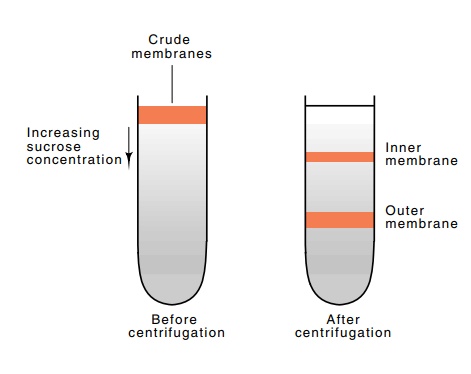 Figure 7.22 Isopycnic sepa-ration of membrane fractions by centrifugation on a pre-formed sucrose gradient. 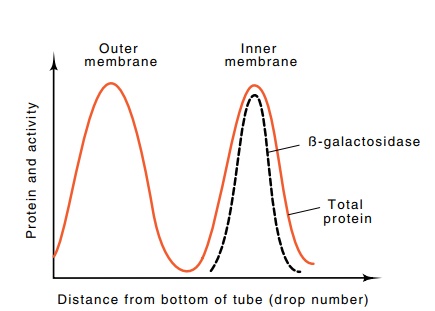 Is the N-terminal sequence from malF actually necessary for export of the β-galactosidase into or through the membrane? Some of the fusions of malF to lacZ that were generated in the study yielded proteins that remained in the cytoplasm. Genetic studies showed that the process of producing the fusions in these strains had removed most of the signal peptide of the malF gene. Other studies have shown that mutations which abolish export of fusion proteins alter the signal peptide. These experiments show that the signal peptide plays an important role in export. It is clear, however, that the signal peptide is not the whole story. The malF-lacZ fusion protein was stuck to the inner membrane. It was not located in the periplasmic space, the final destination of the native malF protein. Therefore something in the structure of theβ-galactosi-dase protein prevents the hybrid from reaching the periplasmic space. Hence, reaching the periplasmic space requires the leader sequence as well as a compatible structure in the remainder of the protein.