In bacteria, the protein elongation rate is about 16 amino acids per second. This means the ribosomes are moving about 48 nucleotides per second along the messenger RNA.

In bacteria, the protein elongation rate is about 16 amino acids per second. This means the ribosomes are moving about 48 nucleotides per second along the messenger RNA. This value is very close to the corresponding transcription rate of 50 to 60 bases per second. Therefore once a ribosome begins translation it can keep up with the transcribing RNA polymerase. In several of the better-studied operons, the rate of ribosome attachment is sufficiently fast that the ribosomes are rather closely spaced on the messenger, with about 100 Å of free space between ribosomes. In other operons, however, the spacing is greater.

How can the in vivo rate of protein elongation be measured? One approach would be to use methods analogous to those used to measure RNA elongation rates as described. Unfortunately, no adequate inhibitors of protein initiation analogous to rifamycin are known, and slightly more complicated experiments must be done. The most general method for rate measurement uses an idea originally developed for measurement of RNA elongation rates before rifamycin was available. 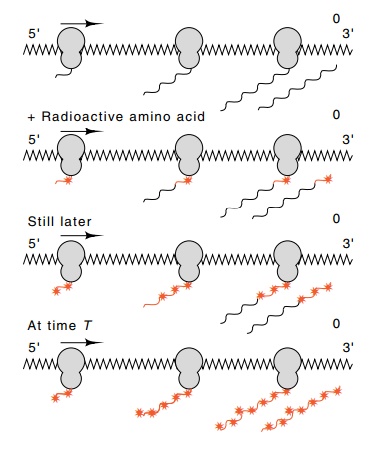 Consider an experiment in which a radioactive amino acid is added to a culture of growing cells (Fig. 7.18). Let us focus our attention on a class of protein of one particular size and consider intervals that are short compared with the cell doubling time. The number of polypeptide chains in the size class completed after the addition of radioactive label is proportional to the time of labeling, nαt.

Also, for labeling intervals shorter than the time required to synthe-size this size of polypeptide chain from one end to the other, the average amount of label incorporated into each chain is proportional to the time that label has been present. Hence during this early period, the total amount of radioactivity in the particular size class increases in propor-tion to the number of chains released multiplied by their average radioactivity. Both of these are proportional to the time of labeling, t. 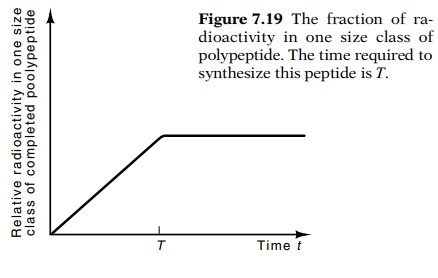 Figure 7.19 The fraction of ra-dioactivity in one size class of polypeptide. The time required to synthesize this peptide is T.

Thus the radioactivity in the particular size class of protein increases in proportion to t2.

The experimental protocol for performing the elongation rate meas-urement is simply to add a radioactive amino acid to a growing culture of cells. At intervals thereafter, samples are withdrawn and the protein

from the entire sample is denatured with sodium dodecyl sulfate and electrophoresed on a polyacrylamide gel. This provides the requisite size separation of the polypeptides as described.