Once messenger has bound to the smaller ribosomal subunit and then a larger subunit has been added, translation can begin.

Tricking the Translation Machinery into Initiating

Once messenger has bound to the smaller ribosomal subunit and then a larger subunit has been added, translation can begin. Escherichia coli proteins initiate primarily at AUG codons with a peptide chain analog in which part of the initiating amino acid looks like a peptide bond (Fig. 7.11). This permits the system to form the first real peptide bond with essentially the same machinery as it uses to form subsequent peptide bonds. 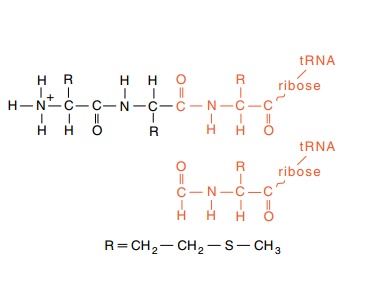 Figure 7.11 The structure of apolypeptide and the similar struc-ture generated by formylation of an amino acid. The initiation amino acid is methionine, whose side group R is shown.

The initiation analog is N-formyl methionine. Rather than utilize an entirely separate charging pathway with a separate tRNA synthetase, the cells formylate a methionine after it has been put on a tRNAMet. This is, however, a special tRNA called tRNAMetf and it is used only for

initiation. Methionine bound to the second type of tRNAMet cannot be formylated, and this is used only for elongation at internal AUG codons. This scheme prevents the difficulties that would arise from attempting to initiate a protein with an unformylated methionine or attempting to put a formylated methionine on the interior of a protein. A new question is raised by the two tRNAs. How are the two methionine tRNAs distin-guished during translation? AUG codons occur both at the beginning of protein coding sequences and within coding sequences. 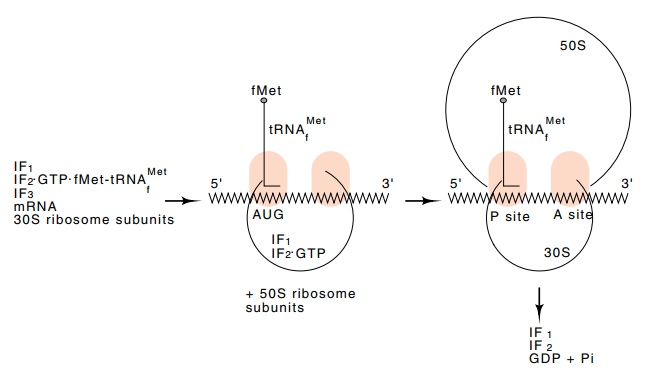 The two Met-tRNAs are distinguished by a set of proteins used in the initiation and elongation processes. These proteins carry the charged tRNA molecules into the ribosome (Fig. 7.12). Interactions between the proteins and the ribosome-messenger complex help hold the tRNA-pro-tein complex in the ribosome. The most important of these interactions is that between the three-base anticodon of the tRNA and the three-base codon in the messenger. It is these codon-anticodon interactions that specify the f-Met initiating amino acid and successive amino acids along the polypeptide chain. The protein IF2, initiation factor 2, carries the f−met−tRNAMetf into the site normally occupied by the growing peptide

chain, the P site, whereas all other charged tRNAs, including met-tRNA, are carried into the other site, the acceptor, A, site, by the elongation factors. Thus N-formyl methionine can be incorporated only at the beginning of a polypeptide.

The initiation of translation in eukaryotes shows some similarity to the process used in bacteria. Two methionine tRNAs are used, one for initiation and one for elongation, but the methionine on the initiating tRNA is not formylated. Methionine on this tRNA, however, can be formylated by the bacterial formylating enzyme. It appears as if the eukaryotic initiation system has evolved from the bacterial system to the point that the formyl group is no longer necessary for protein synthesis, but the tRNAMetf is still similar to its progenitor bacterial tRNAMetf.