What decodes the messages? Clearly, base pairing between a codon of message and an anticodon of the aminoacyl-tRNA decodes. This is not the complete story however.

What decodes the messages? Clearly, base pairing between a codon of message and an anticodon of the aminoacyl-tRNA decodes. This is not the complete story however. Since the ribosome pays no attention to the correctness of the tRNA charging, the aminoacyl-tRNA synthetases are just as important in decoding, for it is also essential that the tRNA molecules be charged with the correct amino acid in the first place. 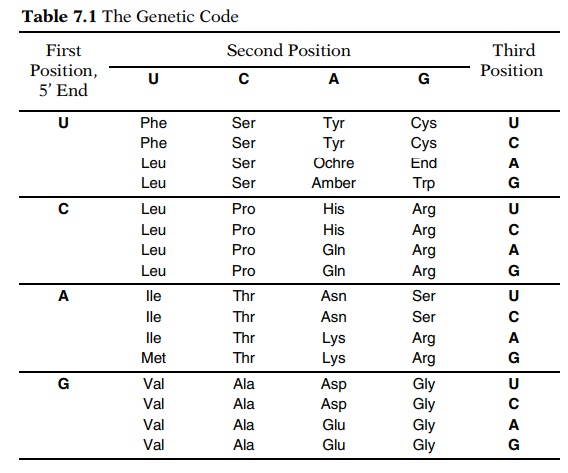 Once the amino acids have been linked to their cognate tRNAs, the process of protein synthesis shifts to the ribosome. The “code” is the correspondence between the triplets of bases in the codons and the amino acids they specify (Table 7.1). In a few exciting years molecular biologists progressed from knowing that there must be a code, to learning that each amino acid is encoded by three bases on the messen-ger, to actually determining the code. The history and experiments of the time are fascinating and can be found in The Eighth Day of Creation by Horace Freeland Judson.

In the later stages of solving the code it became apparent that the code possessed certain degeneracies. Of the 64 possible three-base codons, in most cells, 61 are used to specify the 20 amino acids. One to six codons may specify a particular amino acid. As shown in Table 7.1, synonyms generally differ in the third base of the codons. In the third position, U is equivalent to C and, except for methionine and trypto-phan, G is equivalent to A.

Under special circumstances likely to reflect early evolutionary his-tory, one of the three codons that code for polypeptide chain termina-tion also codes for the insertion of selenocysteine. The same codon at the end of other genes specifies chain termination. Thus, the context surrounding this codon also determines how it is read. Generally such context effects change only the rates of insertion of amino acids, but not their identity. 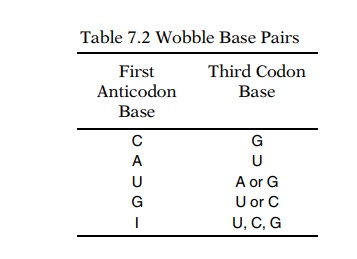 With the study of purified tRNAs, several facts became apparent. First, tRNA contains a number of unusual bases, one of which is inosine,

which is occasionally found in the first position of the anticodon. Second, more than one species of tRNA exists for most of the amino acids. Remarkably, however, the different species of tRNA for any amino acid all appear to be charged by the same synthetase. Third, strict Watson-Crick base pairing is not always followed in the third position of the codon (Table 7.2). Apparently the third base pair of the codon-anticodon complex permits a variety of base pairings (Fig. 7.7). This phenomenon is called wobble. The G-U base pair of alanine tRNA mentioned above is an example of wobble.

Figure 7.7 Structure of the wobble base pairs. 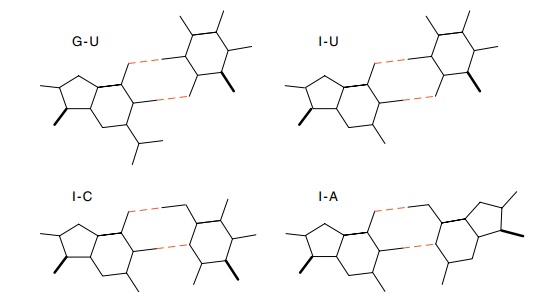 In mitochondria the genetic code might be slightly different from that described above. There the translation machinery appears capable of translating all the codons used with only 22 different species of tRNA. One obstacle to understanding translation in mitochondria is the RNA editing that can occur in these organelles. Because the sequence of mRNA can be changed after its synthesis, we cannot be sure that the sequence of genes as deduced from the DNA is the sequence that actually is translated at the ribosome. Hence deductions about the use or lack of use of particular codons as read from the DNA sequence cannot be made with reliability.