We learned that proteins possess a definite sequence of amino acids that are linked by peptide bonds. Aminoacyl-tRNA mole-cules participate in the formation of these bonds in two ways.

We learned that proteins possess a definite sequence of amino acids that are linked by peptide bonds. Aminoacyl-tRNA mole-cules participate in the formation of these bonds in two ways. First, they bring activated amino acids to the reaction. They also serve as adapters between the various three-base codons in the messenger RNA and the actual amino acids to be incorporated into the growing polypeptide chain. Because different tRNA molecules must be distinguishable at the 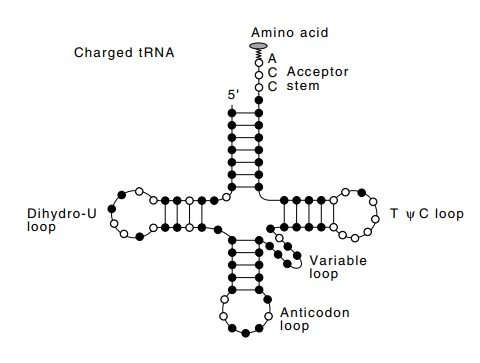 step of attaching amino acids, they differ in structure (Fig. 7.1). On the other hand, the tRNA molecules must also possess important structural features in common so that the tRNA molecules may be used in peptide bond formation at the ribosome. Formation of a peptide bond is ener-getically unfavorable and is assisted at the step of bond formation by the energy in the amino acid-tRNA bond. This is an ester to the 3’ hydroxyl at the invariant -C-C-A end of the tRNA. Aminoacyl-tRNA synthetases, one for each amino acid, form these bonds. The formation of the ester bonds, activation, occurs in two steps. First the enzyme links the amino acid to AMP, and then transfers it to the 3’ terminal adenosine of the tRNA (Fig. 7.2). 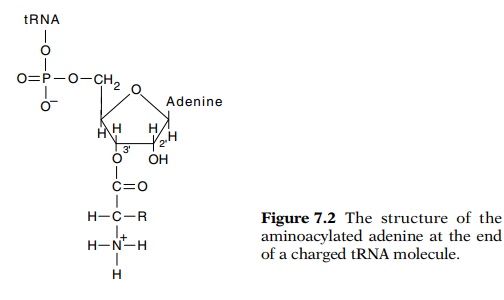 Some synthetases activate the 2’-hydroxyl of the terminal base of tRNA, others activate the 3’, and some activate both the 2’ and 3’ hydroxyls, but the differences probably do not matter because after the aminoacyl-tRNA is released from the enzyme, the aminoacyl group on the tRNA migrates back and forth.