The information for the sequence of amino acids in a protein is carried from the DNA to ribosomes in the messenger RNA.

The information for the sequence of amino acids in a protein is carried from the DNA to ribosomes in the messenger RNA. Once the necessary proteins have been synthesized from a messenger, it is necessary that the translation of the messenger cease. In principle, exponentially growing bacterial cells can eliminate unneeded mRNA merely by dilution due to growth of the cells. Cells that have ceased overall growth, such as eukaryotic cells in a fully grown organism, cannot use this approach. 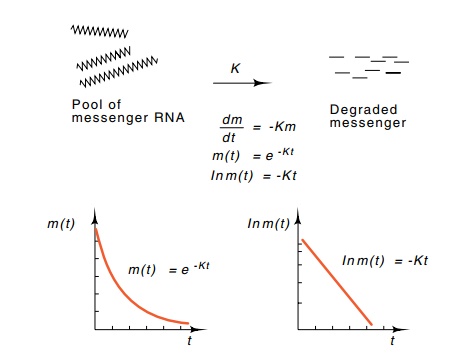 Complicated mechanisms can be imagined for destruction of mes-senger once it has been used a fixed number of times. Cells appear not to use strict bookkeeping on translation, however. Once a messenger RNA has been synthesized, it has a fixed probability per unit time of being degraded by nucleases (Fig. 7.17). This is a random decay process. The population of such molecules then can be characterized as having a half-life and will show an exponential decay in levels if synthesis stops. Some molecules in the population will survive for long times while others will be degraded soon after their synthesis.