Although it would appear that the charged tRNAs could diffuse into the ribosome and bind to the codons of mRNA, they are in fact carried into the binding sites on a protein.

Although it would appear that the charged tRNAs could diffuse into the ribosome and bind to the codons of mRNA, they are in fact carried into the binding sites on a protein. The protein that serves this function during elongation was originally called Tu (unstable) but is now some-times called EF1 (elongation factor 1). A rather complex cycle is used for carrying the charged tRNAs to the ribosome A site (Fig. 7.13). First, GTP binds to EF1, then an aminoacyl tRNA binds, and this complex enters the ribosome A site containing a complementary codon. There GTP is hydrolyzed to GDP, and EF1-GDP is ejected from the ribosome. The completion of the cycle takes place in solution. GDP is displaced from EF1-GDP by EF2, which in turn is displaced by GTP. The binding of GDP to EF1 is tight; Kd equals approximately 3 × 10-9 M. This plus the fact that EF1 binds to filters permits a simple filter-binding assay to be used to quantitate the protein. Originally the very tight binding for GDP generated confusion because the commercial preparation of GTP con-tained minor amounts of contaminating GDP.

Both the initiation factor IF2 and the elongation factor EF1 carry charged tRNA molecules into the ribosome. Not surprisingly, they possess considerable amino acid sequence homology. Additionally, cells which incorporate selenocysteine into the one or two proteins contain-ing this amino acid use yet a third factor. This carries the charged tRNA into the ribosome, and, as expected, also possesses significant homology with the other two factors. All three of the proteins are members of the broad and important class of proteins known as G proteins as they bind GTP. In eukaryotic cells the G proteins most often are part of signal transduction pathways from receptor proteins bound in the membrane to gene regulation or other intracellular points of regulation. 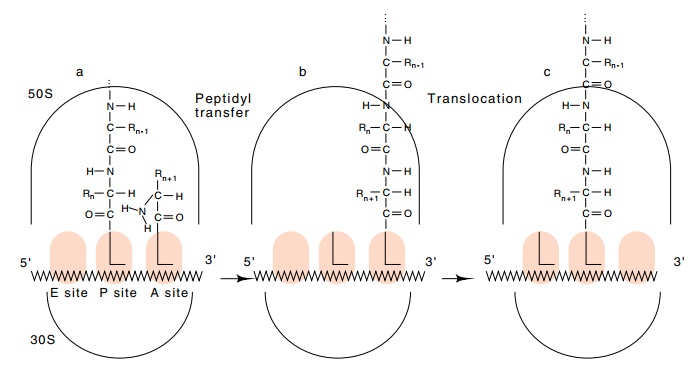