Cells must direct proteins to several different locations. In addition to the cytoplasm in which most proteins in bacteria are found, proteins are also found in membranes, the cell wall, in the periplasmic space, and secreted altogether.

Cells must direct proteins to several different locations. In addition to the cytoplasm in which most proteins in bacteria are found, proteins are also found in membranes, the cell wall, in the periplasmic space, and secreted altogether. Proteins in eukaryotic cells are found in the cytoplasm and in various cell organelles such as the mitochondria, chloroplasts, lysosomes. Proteins may be excreted as well. Proteins are synthesized in the cytoplasm, but directing them to enter or cross the cell membranes occurs during or shortly after synthesis of the protein. How is this done?

Crucial first observations on protein localization were made on immunoglobulin secretion. There it was observed that ribosomes syn-thesizing immunoglobulin were bound to the endoplasmic reticulum. Furthermore, when messenger from the membrane-bound ribosomes was extracted and translated in vitro, immunoglobulin was synthesized; however, it was slightly larger than the normal protein. This protein possessed about 20 extra amino acids at its N-terminus. Finally, when translation that had initiated in vivo was completed in vitro, immuno-globulin of the normal length was synthesized. These observations led Blobel to propose the signal peptide model for excretion of proteins.

The signal peptide model utilizes observations on immunoglobulin excretion and has the following parts (Fig. 7.20): first, the N-terminal

Figure 7.20 Using an N-terminal peptide of a protein as a signal for proteinexport. As ribosomes begin translation, the hydrophobic signal peptide signals attachment to a site on the membrane. The protein is exported through the membrane as it is synthesized, and at some point the signal peptide is cleaved. 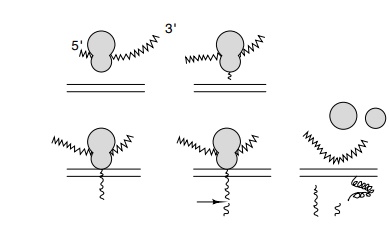 sequence of a protein to be excreted contains a signal that specifies its transport; second, during translation of messenger coding for an ex-creted protein, the N-terminal amino acids are required for binding the ribosomes to the membrane; third, during the synthesis of the remain-der of the protein, the growing polypeptide chain is directly excreted through the membrane; fourth, often during synthesis the signal peptide is cleaved from the remainder of the protein. This leads to the fifth element of the model: there should exist in or on the membrane a protease to cleave the signal peptide from excreted proteins.