How is the elongation process ended and the completed polypeptide released from the final tRNA and from the ribosome?

How is the elongation process ended and the completed polypeptide released from the final tRNA and from the ribosome? The signal for ending the elongation process is any one of the three codons UGA, UAA, and UAG. Of the 64 possible three-base codons, 61 code for amino acids, and are “sense,” and 3 code for termination, and are “nonsense.” In termination, as in the other steps of protein synthesis, specialized proteins come to the ribosome to assist the process. Apparently upon chain termination, the ribosome is unlocked but not immediately re-leased from the messenger. For a short while before it can fully disso-ciate from messenger, it can drift phaselessly forward and backward 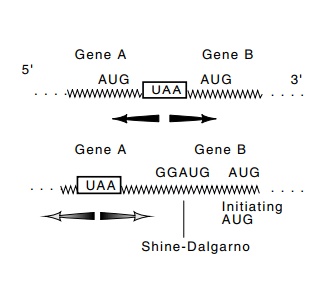 Figure 7.15 Translation termina-tion and reinitiation. Top: A ribosome terminating at the UAA codon could directly reinitiate at either of the nearby AUG codons if either possesses a ribosome bind-ing site. Bottom: A ribosome terminating at the UAA codon would not be able to drift to the more distant AUG codon on the right. A new initiation complex would have to form using the GGAG sequence to bind 16S rRNA.

short distances and can reinitiate translation if it encounters a ribo-some-binding site and an initiation codon before it dissociates (Fig. 7.15).

protein R3, which accelerates the termination process. Cells contain approximately one molecule of R per five ribosomes, a number consis-tent with the usage of these molecules.

The existence of chain termination codons is responsible for an interesting phase in the growth of molecular biology. A mutation within a gene can change one of the 61 sense codons into one of the polypeptide chain terminating, or nonsense codons. This result shows that only the three bases are necessary to code for chain termination, no others are required, and no special secondary structure of the mRNA is required. As a result of a nonsense codon within a gene, the protein encoded by the mutated gene will be prematurely terminated during translation. Usually the shortened polypeptide possesses no enzymatic activity, and it is frequently degraded by proteases within the cell. An additional effect of a nonsense mutation is depressed translation of a following gene in an operon. This polar effect results from termination of tran-scription due to the sizeable portion of the barren mRNA following the nonsense codon and preceding the next ribosome initiation site. Quite surprisingly, some bacterial strains were found that could suppress the effects of a nonsense mutation. Although the suppressors rarely restored the levels of the “suppressed” protein to prior levels, the cell often

possessed sufficient amounts of the protein to survive. In the case of a nonsense mutation in a phage gene, the suppressor strains permitted the phage to grow and form plaques.

Capecchi and Gussin showed that a suppressing strain inserted a particular amino acid at the site of the nonsense mutation. It did so by “mistranslating” the nonsense codon as a codon for an amino acid. They also showed that the mistranslation resulted from a change in one of the tRNAs for the inserted amino acid. Subsequently, sequencing of suppressor tRNAs has shown that, except in a special case, their antico-dons have been altered so as to become complementary to one of the termination codons. Apparently one of two different events can then occur when a ribosome reaches a nonsense codon in a suppressing strain. Termination can occur via the normal mechanism, or an amino acid can be inserted into the growing polypeptide chain and translation can proceed.

Using genetic selections, suppressors have been found that insert tyrosine, tryptophan, leucine, glutamine, and serine. Except in unusual cases, such suppressors must be derived from the original tRNAs by single nucleotide changes. By chemical means and the utilization of genetic engineering, an additional half dozen or so suppressors have been synthesized.

The termination codon UAG has come to be called amber and UAA called ochre. No generally used name for the UGA codon exists, al-though it is sometimes called opal. Amber-suppressing tRNAs read only the UAG codon, and ochre-suppressing tRNAs read both UAA and UAG codons as a result of the “wobble” in translation. Since the R factors are protein and cannot be constructed like tRNA, it is no surprise that R2 does not “wobble” and does not recognize the UGG (trp) codon.

How do normal proteins terminate in suppressing cells? If a suppres-sor were always to insert an amino acid in response to a termination codon instead of terminating, then many of the cellular proteins in suppressor-containing cells would be fused to other proteins or at least be appreciably longer than usual. The problem of terminating normal proteins could be solved in part by the presence of several different termination signals at the end of every gene. Then only the introduction of several different suppressors to a cell could create problems. Few genes, however, have been found to be ended by tandem translation terminators.

The more likely explanation for the viability of nonsense-suppressing strains is that the efficiency of suppression never approaches 100%. Typically it is 10% to 40%. Hence suppression of normal translation termination codons can fuse or lengthen some proteins in a cell, but most terminate as usual. On the other hand, the gene possessing the nonsense mutation would occasionally yield a suppressed instead of terminated protein. A suppression efficiency of 20% could reduce the amount of some cellular proteins from 100% to 80%, relatively speaking, not a substantial reduction. On the other hand, the existence of this suppressor would raise the amount of the suppressed protein from 0% to 20% of normal. Relative to the nonsuppressed level, this is an enormous increase.