The dramatic ability of bacteria to grow with a wide variety of rates prompts the question of how they manage to maintain balanced synthe-sis of their macromolecules.

The dramatic ability of bacteria to grow with a wide variety of rates prompts the question of how they manage to maintain balanced synthe-sis of their macromolecules. In a study of this question, Schaechter, Maaløe, and Kjeldgaard made the discovery that ribosomes are used atconstant efficiency, independent of the cell growth rate. To appreciate their contribution fully, it will be helpful first to examine a related question: what is the average rate of protein synthesis per ribosome? As a first step we will estimate this value using typical cellular parameters, then we will calculate this value more carefully and include the effects of increase in the number of ribosomes during a cell doubling time.

An average bacterial cell with a doubling time of 50 minutes contains about 1 × 10-13 g protein and about 10,000 ribosomes. Approximating the molecular weight of amino acids to be 100,

Thus the average rate of protein synthesis per ribosome is 6 × 108/3 × 103= 20 amino acids per second per ribosome. Compared to the typicalturnover number of enzymes, greater than 1,000 per second, this is a low number. We have seen already, however, the process of addition of a single amino acid to the growing polypeptide chain is complex and involves many steps.

To calculate accurately the rate of protein synthesis per ribosome during steady-state growth, we must include the growth of the cells in the calculation. This can be done in the following way. Define αr as the relative rate of synthesis of ribosomal protein, that is,

where Pr, is ribosomal protein and Pt is total protein. Let R(t) be the number of ribosomes in a culture at time t. Since ribosome number will

Then dPt/dt equals the number of ribosomes times the average elonga-tion rate per ribosome, K. That is,

We have the following two expressions for dR/dt

which yields K =µC/αr, our desired relation. Note that if αr is roughly proportional to the growth rate, as has been found for bacteria except at the slowest growth rates (Fig. 7.24), then the term µ/αr is a constant and hence K, average activity of a ribosome, is independent of the growth rate. 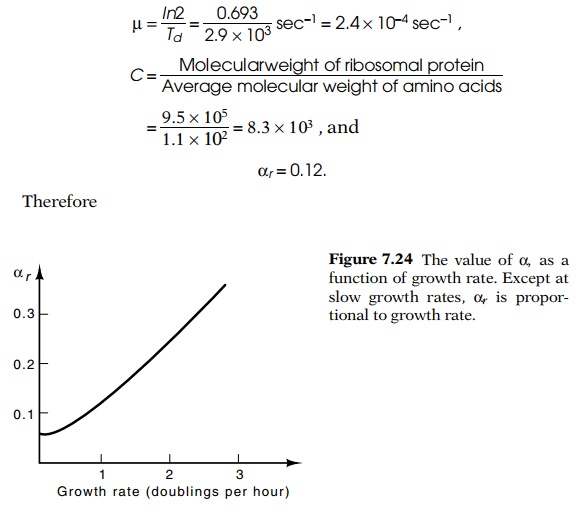 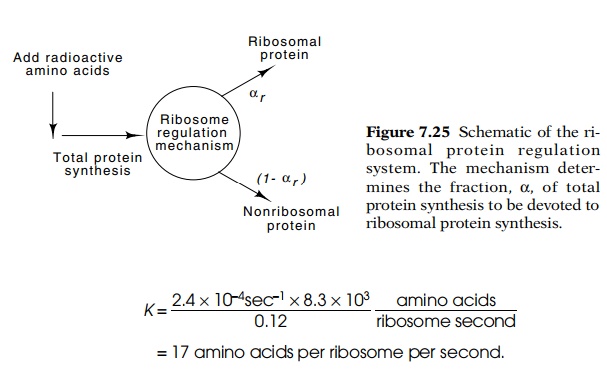 This value is close to the elongation rate of polypeptides, showing that most ribosomes in the bacterial cell are engaged in protein synthesis and are not sitting idle.