Newton’s law of gravitation states that a particle of mass M1 attracts any other particle of mass M2 in the universe with an attractive force. The strength of this force of attraction was found to be directly proportional to the product of their masses and is inversely proportional to the square of the distance between them. In mathematical form, it can be written as: 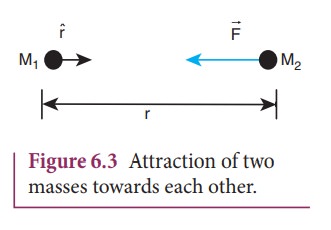 Consider two point masses m1 and m2 which are separated by a distance of 10 meter as shown in the following figure. Calculate the force of attraction between them and draw the directions of forces on each of them. Take m1= 1 kg and m2 = 2 kg 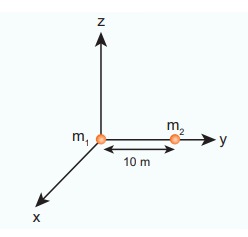 The force of attraction is given by

First, we can calculate the magnitude of the force

It is to be noted that this force is very small. This is the reason we do not feel the gravitational force of attraction between each other. The small value of G plays a very crucial role in deciding the strength of the force.

The force of attraction (

) experienced by the mass m2 due to m1 is in the negative ‘y’ direction ie., rˆ =−jˆ . According to Newton’s third law, the mass m2 also exerts equal and opposite force on m1. So the force of attraction (

The direction of the force is shown in the figure, 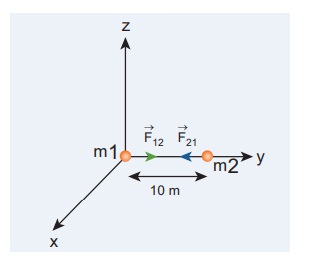 Gravitational force of attraction between m1 and m2

As the distance between two masses increases, the strength of the force tends to decrease because of inverse dependence on r2. Physically it implies that the planet Uranus experiences less gravitational force from the Sun than the Earth since Uranus is at larger distance from the Sun compared to the Earth. 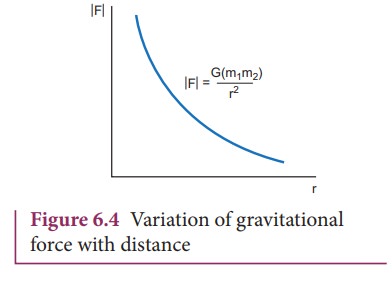 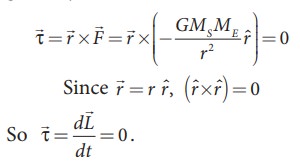 It implies that angular momentum

has one inherent assumption that both M1  and M2 are treated as point masses. When it is said that Earth orbits around the Sun due to Sun’s gravitational force, we assumed Earth and Sun to be point masses. This assumption is a good approximation because the distance between the two bodies is very much larger than their diameters. For some irregular and extended objects separated by a small distance, we cannot directly use the equation (6.3). Instead, we have to invoke separate mathematical treatment which will be brought forth in higher classes.

There is also another interesting result. Consider a hollow sphere of mass M. If we place another object of mass ‘m’ inside this hollow sphere as in Figure 6.5(b), the force experienced by this mass ‘m’ will be zero. This calculation will be dealt with in higher classes. 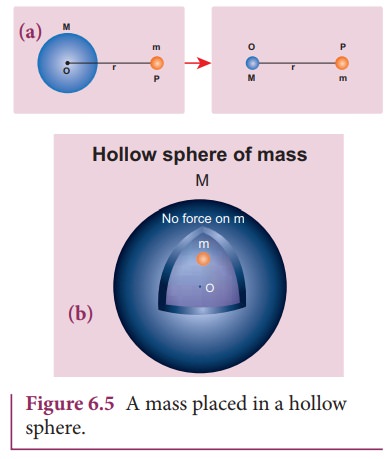 The triumph of the law of gravitation is that it concludes that the mango that is falling down and the Moon orbiting the Earth are due to the same gravitational force.

Newton considered the orbits of the planets as circular. For circular orbit of radius r, the centripetal acceleration towards the center is 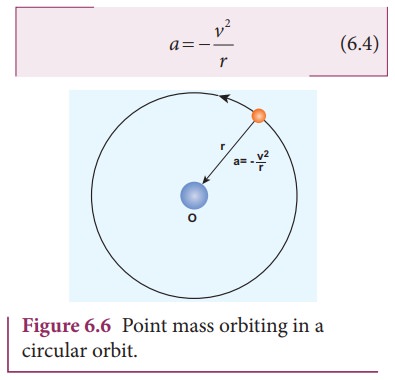 Here v is the velocity and r, the distance of the planet from the center of the orbit (Figure 6.6).

The velocity in terms of known quantities r and T, is

Here T is the time period of revolution of the planet. Substituting this value of v in equation (6.4) we get,

By substituting equation 6.9 in the force expression, we can arrive at the law of gravitation.

Here negative sign implies that the force is attractive and it acts towards the center. In equation (6.10), mass of the planet ‘m’ comes explicitly. But Newton strongly felt that according to his third law, if Earth is attracted by the Sun, then the Sun must also be attracted by the Earth with the same magnitude of force. So he felt that the Sun’s mass (M) should also occur explicitly in the expression for force (6.10). From this insight, he equated the constant 4π2k to GM which turned out to be the law of gravitation

Again the negative sign in the above equation implies that the gravitational force is attractive.

Moon and an apple are accelerated by the same gravitational force due to Earth. Compare the acceleration of the two.

The gravitational force experienced by the apple due to Earth

Equating the above equation with Newton’s second law,

Simplifying the above equation we get,

Here aA is the acceleration of apple that is equal to ‘g’.

The acceleration experienced by the Moon is given by

From the Hipparchrus measurement, the distance to the Moon is 60 times that of Earth radius. Rm = 60R.

The same result was obtained by Newton using his gravitational formula. The apple’s acceleration is measured easily and it is 9.8 m s−2 . Moon orbits the Earth once in 27.3 days and by using the centripetal acceleration formula, (Refer unit 3).

which is exactly what he got through his law of gravitation.