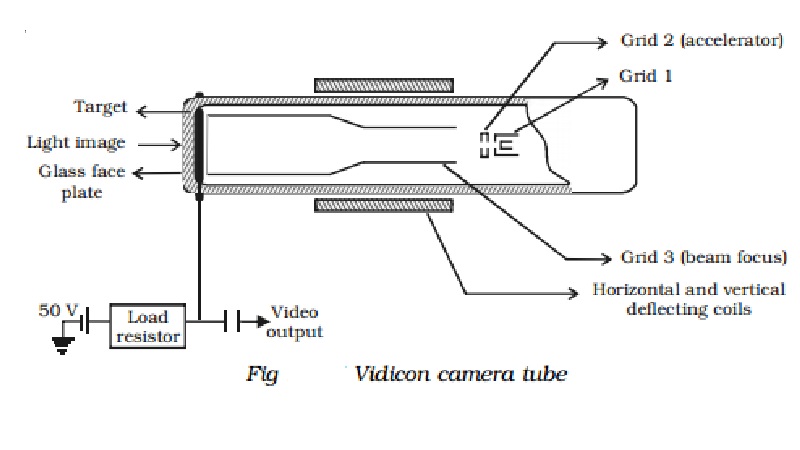 Television is one of the marvels that has been achieved in the field of electronics. 'Television' literally means 'seeing at a distance.' The principle of television broadcasting is essentially the same as that of sound broadcasting.

Television is one of the marvels that has been achieved in the field of electronics. 'Television' literally means 'seeing at a distance.' The principle of television broadcasting is essentially the same as that of sound broadcasting. In sound broadcasting, sound waves are converted into equivalent electrical signals using microphone, which are modulated and transmitted. In picture broadcast (television), the bright and dark spots of a scene are systematically scanned to produce equivalent electrical signals. These picture signals are modulated and are then transmitted. At the receiving end, the picture signals are extracted from the modulated wave. These are made to reproduce the bright and dark spots of the original scene on the fluorescent screen of a cathode ray tube called viewing tube. The sound associated with the scene is transmitted simultaneously to provide a complete picture and sound reproduction at the receiver. Although the end result required is a motion picture, television is basically a system for reproducing a still picture. Many of these are shown one after the other in rapid sequence during each second, to give the illusion of motion. Therefore, the first requirement of the television system is that it should be capable of transmitting and receiving a simple still picture. Usually sound signals are frequency modulated, while picture signals are amplitude modulated.

Vidicon camera is a television camera which converts the light energy into electrical energy. It functions on the principle of photo conductivity, where the resistance of target material decreases when exposed to light.

The Vidicon consists of a glass envelope with an optically flat face plate (Fig ). A photosensitive, target plate is available on the inner side of the face plate. The target plate has two layers. To the front, facing the face plate, is a thin layer of tin oxide. This is transparent to light but electrically conductive. The other side of the target plate is coated with a semiconductor, photosensitive antimony trisulphide. The tin oxide layer is connected to a power supply of 50V.

In order to produce video signal for all the elements in the picture, it is scanned by the electron beam, one element at a time, in sequential order. The scanning is done in the same way as a written page is read to cover all the words in one line and all lines on the page. Hence, scanning is the process by which an electron beam spot is made to move across a rectangular area, so as to cover it completely. This rectangular area may be the target surface in a television camera or the screen of a picture tube in a television receiver.

The scene is scanned rapidly both in the horizontal and vertical directions simultaneously. This provides sufficient number of complete pictures or frames per second to give the illusion of continuous motion. In most of the television systems, the frame repetition rate (scanning frequency) is 25 per second.

For scanning the picture elements, saw tooth potentials can be used. Saw tooth potentials are produced by using a unijunction transistor and a R-C network. Saw tooth potentials are applied to horizontal and vertical deflector plates in a TV camera. When the saw tooth potential is applied to the horizontal plates called line synchronising pulse, the electron beam at A travels along a slanting line AB by the voltage variation of OM and reaches the point B (Fig a and b). From B, the scanning spot travels along a line BC by the voltage variation MN. In order that no picture should be scanned during the return journey (i.e. the beam from the right horizontal end to the beginning of the next line), a blanking pulse, which is a high negative potential, is applied to the control grid of electron gun during the duration of the return journey. This prevents the emission of electrons from electron gun. Then the electron beam starts to scan the next line and the process gets repeated till the whole picture is scanned. On reaching the right bottom corner, the scanning spot quickly moves up to the top left corner by the application of saw tooth potential to the vertical deflector plates, called frame synchronising pulse. Thus for scanning the picture, the three synchronising pulses are used. These synchronising pulses along with the output of the TV camera are modulated on an ultra high frequency carrier and transmitted. The accompanying sound is frequency modulated and transmitted via the same antenna.

In India, the frame repetition rate has been standardised at 25 frames per second. This repetition rate is enough to cause an illusion of continuity. But, the brightness of one frame blends (mix) smoothly into the next, through this time when the screen is blanked between successive frames. This results in definite flicker of light, that is very annoying to the observer, when the screen becomes alternatively bright and dark. To eliminate this flicker, each frame is scanned twice.

In this scanning, the total number lines are divided into two groups called fields. During the presentation of the first field, only the odd numbered lines are scanned, while during the second field all the even numbered lines are scanned. Half way along the bottom of the first field, the vertical retrace returns the scanning beam to the top of the image and completes the unfinished lines. (i.e) The remaining even numbered lines are then scanned during second field. This method of scanning is known as interlaced scanning. In the 625 line TV system, for successful interlaced scanning, the 625 lines of each frame or picture are divided into sets of 312.5 lines and each set is scanned alternatively to cover the entire picture area. The principle of interlaced scanning is shown in Fig .

Hence, with the interlaced scanning the flicker effect is eliminated without increasing the speed of scanning, which in turn does not need any increase in channel bandwidth.

Vertical scanning is the movement of the electron beam spot in the vertical direction. One frame consists of two fields, resulting into 50 fields per second with a vertical field scan time of 1/50=20ms.