Sommerfeld atom model and its Drawbacks 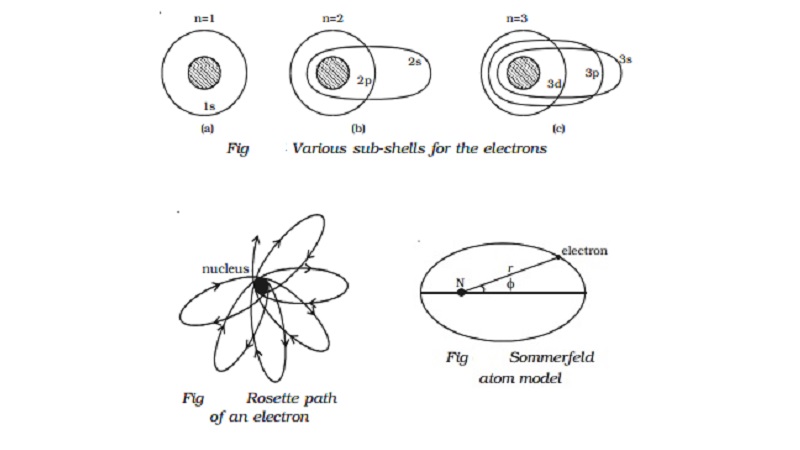 (i)    According to Sommerfeld, the path of an electron around the nucleus, in general, is an ellipse with the nucleus at one of its foci.

(ii) The velocity of the electron moving in an elliptical orbit varies at different parts of the orbit. This causes the relativistic variation in the mass of the moving electron.

Now, when elliptical orbits are permitted, one has to deal with two variable quantities.

(i)    The varying distance of the electron from the nucleus (r).

(ii) The varying angular position of the electron with respect to the nucleus i.e the azimuthal angle φ (Fig). 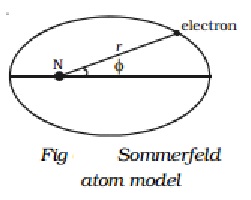 To deal with these two variables, two quantum numbers are introduced

(i) The principal quantum number n of  Bohr's  theory,  which  determines  the energy  of  the  electrons,  and

where a and b are semi-major and semi-minor axes respectively of the ellipse.

According to Sommerfeld's model, for any principal quantum number n, there are n possible orbits of varying eccentricities called sub-orbits or sub-shells. Out of n subshells, one is circular and the remaining (i.e., n-1) are elliptical in shape.

These possible sub-orbits possess slightly different energies because of the relativistic variation of the electron mass.

Consider the first energy level (n=1). When n = 1, l = 0 i.e., in this energy level, there is only one orbit or sub-shell for the electron. Also, when a = b, the two axes of the ellipse are equal. As a result of this, the orbit corresponding to n=1 is circular. This subshell is designated as s sub-shell. Since, this sub-shell belongs to n=1, it is designated as 1s (Fig a).

Similarly, for the second energy level n=2, there are two permissible sub-shells for the electrons. For n=2, l can take two values, 0 and 1.

This subshell corresponding to l = 0 is elliptical in shape and is designated as 2s.

This sub-shell corresponding to l = 1 is circular in shape and is designated as 2p (Fig b).

The sub-shells corresponding to l = 0, 1 and 2 are designated as 3s, 3p and 3d respectively. The circular shell is designated as 3d and the other two are elliptical in shape (Fig c).

It is common practice to assign letters to l-values as given below:

Based on Sommerfeld atom model, the total energy of an electron in the elliptical orbit can be shown as,

This expression is the same as that obtained by Bohr. Thus the introduction of elliptical orbits gives no new energy levels and hence no new transition. In this way, the attempt of Sommerfeld to explain the fine structure of spectral lines failed. But soon, on the basis of variation of mass of electron with velocity, Sommerfeld could find the solution for the problem of the fine structure of the spectral lines. 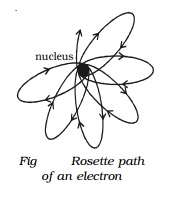 Based on this idea, Sommerfeld successfully explained the fine structure of spectral lines of hydrogen atom.

(ii)             It could not explain the distribution and arrangement of electrons in atoms.

(iii)           Sommerfeld's model was unable to explain the spectra of alkali metals such as sodium, potassium etc.

(v)             This model does not give any explanation for the intensities of the spectral lines.