Millikan's oil drop experiment - Determination of charge of an electron 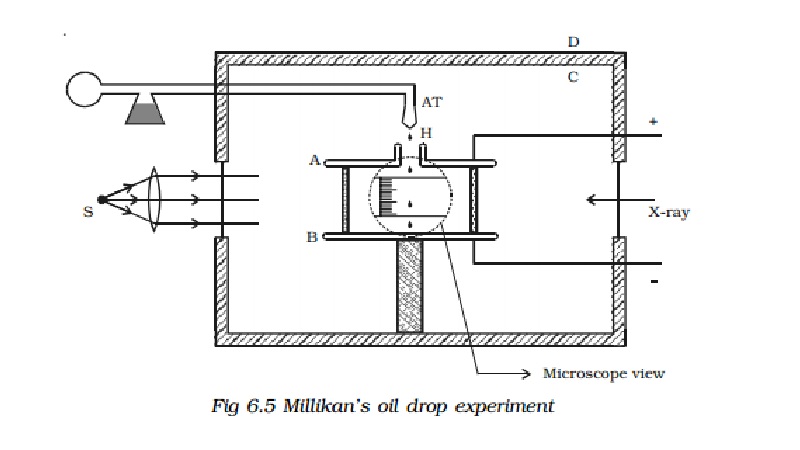 Determination of charge of an electron - Millikan's oil drop experiment

Millikan's experiment is used for the measurement of charge of an electron.

The apparatus consists of two horizontal circular metal plates A and B, about 22 cm in diameter and separated by a distance of about 16 mm as shown in Fig 6.5. The upper plate has a hole (H) in the middle. These plates are held together by insulating rods of glass or ebonite, so that they are perfectly parallel to each other. 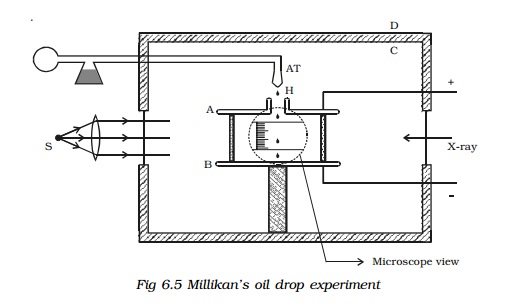 The plates are surrounded by a constant temperature bath D and the chamber C containing dry air. The plates are connected to a battery which can provide a potential difference of the order of 10000 V.

A spray of fine droplets of a highly viscous liquid (such as glycerine) is produced by means of an atomiser (AT) near the hole H and enter the space between A and B. The droplets are illuminated by an arc lamp L and are seen through a microscope whose eyepiece is provided with a micrometer scale. One such droplet is viewed through the microscope as it descends under gravity. The viscous force due to air increases and soon it attains a constant terminal velocity and let it be v. The terminal velocity v of the droplet is measured using the microscope.

(i) Motion under gravity

The gravitational force acting on the oil drop downwards is equal to mg =4/3 πa3 ρ g, where a is the radius of the oil drop, ρ is the density of the oil and g, the acceleration due to gravity.

The upthrust experienced by the oil drop due to the displaced air is 4/3 πa3 σ g, where σ is the density of air.

By Stoke's law, the viscous force on the oil drop is 6πaηv, where η is the co-efficient of viscosity of air.

The radius of the oil drop is,

The air inside the parallel plates is ionized by sending a beam of X-rays. The droplets pickup one or more electrons from the ionized air.

Let q be the charge carried by the droplet under observation. Let E be the electric field applied between the plates A and B, so that the drop moves upwards with a terminal velocity v1, which can be determined using the microscope.

The force on the droplet due to electric field is Eq. Since the velocity of the droplet is uniform, we have

Substituting the value of a in equation (5) from equation (3),

If V is the potential difference between A and B, d is the distance between them, then E =V/d

Millikan determined the value q for a large number of oil drops using equation (6) and found that they are an integral multiple of a least value. The greatest common factor gives the charge e of the electron.