Rutherford atom model and its Drawbacks 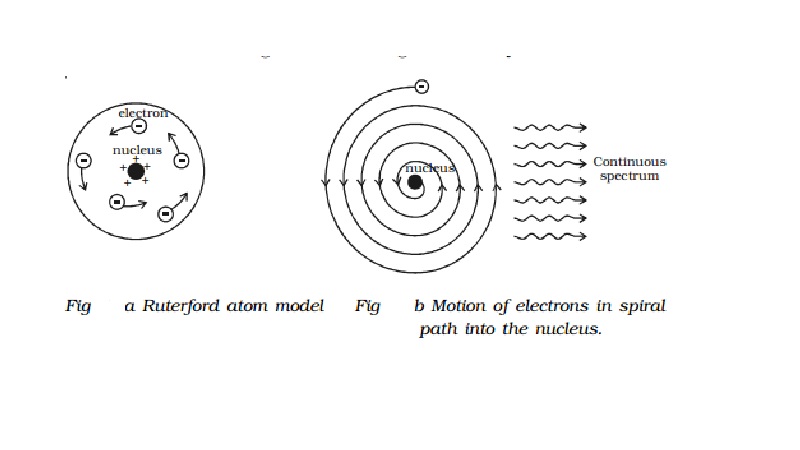 1)    Atom may be regarded as a sphere of diameter 10-10m, but whole of the positive charge and almost the entire mass of the atom is concentrated in a small central core called nucleus having diameter of about 10-14m as shown in Fig a.

Rutherford atom model offered serious difficulties as regards the stability of the atom. Following are the two drawbacks of Rutherford's model: (i) The electron in the circular orbit experiences a centripetal acceleration. According to electromagnetic theory, an accelerated electric charge must radiate energy in the form of electromagnetic waves. Therefore, if the accelerated electron lose energy by radiation, the energy of the electron continuously decreases and it must spiral down into the nucleus, as shown in Fig 6.9b. Thus, the atom cannot be stable. But, it is well known that most of the atoms are stable. (ii) According to classical electromagnetic theory, the accelerating electron must radiate energy at a frequency proportional to the angular velocity of the electron. Therefore, as the electron spiral towards the nucleus, the angular velocity tends to become infinity and hence the frequency of the emitted energy will tend to infinity. This will result in a continuous spectrum with all possible wavelengths. But experiments reveal only line spectra of fixed wavelength from atoms.