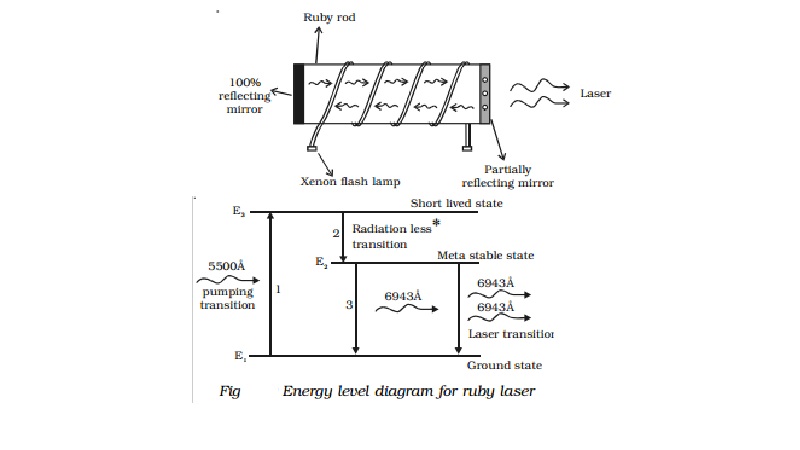 Ruby laser - Generation Process The Ruby laser was first developed by T.Maiman in 1960. It consists of a single crystal of ruby rod of length 10 cm and 0.8 cm in diameter.

The Ruby laser was first developed by T.Maiman in 1960. It consists of a single crystal of ruby rod of length 10 cm and 0.8 cm in diameter. A ruby is a crystal of aluminium oxide Al2O3, in which some of aluminium ions (Al3+) are replaced by the chromium ions (Cr3+). The opposite ends of ruby rod are flat and parallel; one end is fully silvered and the other is partially silvered (i.e.) semi transparent. The ruby rod is surrounded by a helical xenon flash tube which provides the pumping light to raise the chromium ions to upper energy level (Fig ). In the xenon flash tube, each flash lasts several milliseconds and in each flash a few thousand joules of energy is consumed. 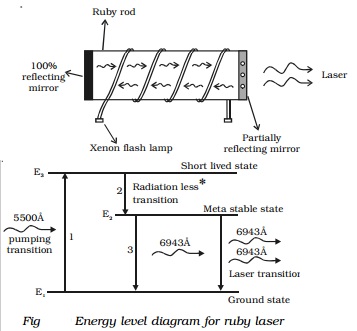 The simplified energy level diagram of chromium ions in a ruby laser, indicating appropriate excitation and decay is shown in Fig 6.30. In normal state, most of the chromium ions are in the ground state E1. When the ruby rod is irradiated by a flash of light, the 5500 Ĺ radiation (green colour) photons are absorbed by the chromium ions which are pumped      to          the excited  state E3. The excited ion gives up part of its energy to the crystal lattice and decay without giving any radiation to the  meta stablestate E2. Since, the state E2 has a much longer lifetime (10-3s), the number of ions in this state goes on increasing. Thus population inversion is achieved between the states E2 and E1. When the excited ion from the metastable state E2 drops down spontaneously to the ground state E1, it emits a photon of wavelength 6943 Ĺ. This photon travels through the ruby rod and is reflected back and forth by the silvered ends until it stimulates other excited ion and causes it to emit a fresh photon in phase with stimulating photon. Thus the reflections will amount to the additional stimulated emission - the so called amplification by stimulated emission. This stimulated emission is the laser transition. Finally, a pulse of red light of wave length  6943  Ĺ emerges through the partially silvered end of the crystal.