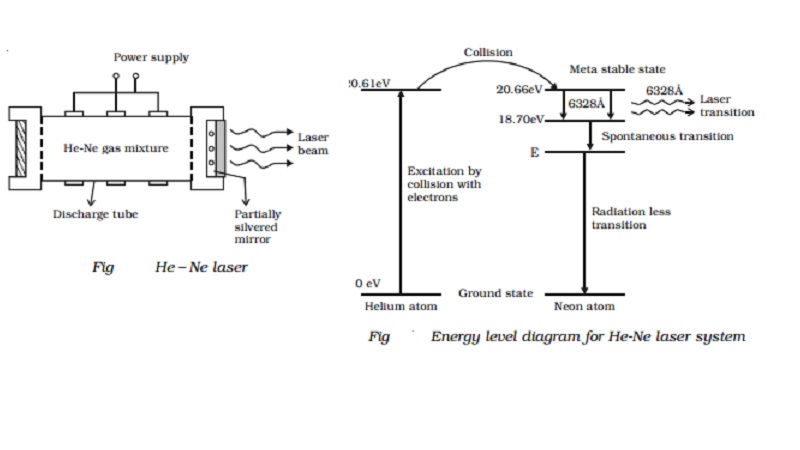 A continuous and intense laser beam can be produceA simplified diagram showing basic features of a He - Ne gas laser is shown in Fig.d with the help of gas lasers.

A continuous and intense laser beam   can be     produced with the help of gas lasers. A simplified diagram showing basic features of a He - Ne gas laser is shown in Fig. He - Ne laser system consists of a quartz discharge tube containing helium and neon in the ratio of 1 : 4 at a total pressure of about 1 mm of Hg. One end of the tube is fitted with a perflectly reflecting mirror and the other end with partially reflecting mirror. 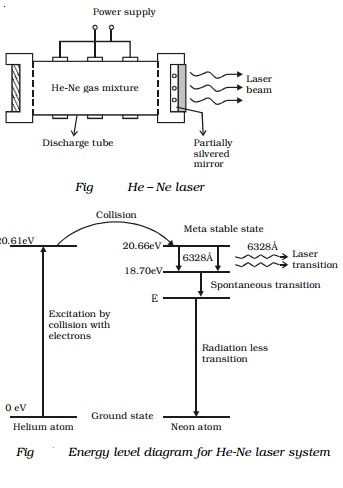 A powerful radio frequency generator is used to produce a discharge in the gas, so that the helium atoms are excited to a higher energy level.

The energy level diagram for He and Ne atoms are shown in Fig2. When an electric discharge passes through the gas, the electron in the discharge tube collide with the He and Ne atoms and excite them to metastable states of energy 20.61 eV and 20.66 eV respectively above the ground state. Some of the excited helium atoms transfer their energy to unexcited Ne atoms by collision. Thus, He atom help in achieving a population inversion in Ne atoms. When an excited Ne atom drops down spontaneously from the metastable state at 20.66 eV to lower energy state at 18.70 eV, it emits a 6328 Ĺ photon in the visible region. This photon travelling through the mixture of the gas, is reflected back and forth by the reflector ends, until it stimulates an excited neon atom and causes it to emit a fresh 6328 Ĺ photon in phase with the stimulating photon. This stimulated transition from 20.66 eV level to 18.70 eV level is the laser transition. The output radiations escape from the partially reflecting mirror. The neon atoms drop down from the 18.70 eV level to lower state E, through spontaneous emission emitting incoherent light. From this level E, the Ne atoms are brought to the ground state through collision with the walls of the tube. Hence the final transition is radiationless.