Spontaneous and stimulated emission of Laser 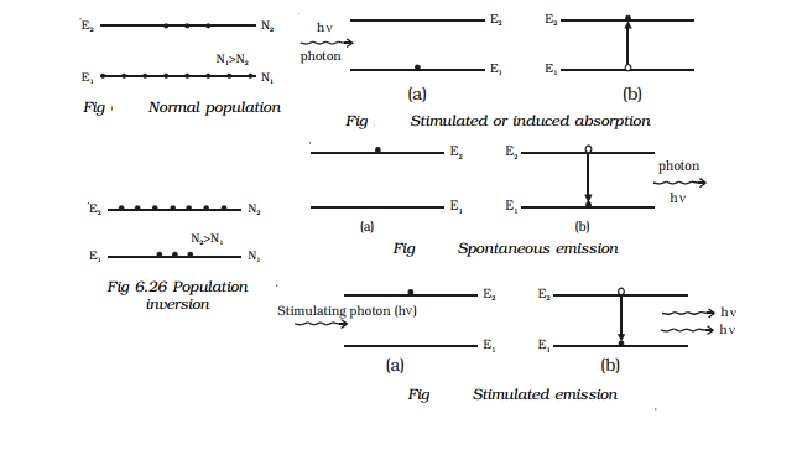 Characteristics of laser : The laser beam (i) is monochromatic. (ii) is coherent, with the waves, all exactly in phase with one another, (iii) does not diverge at all and (iv) is extremely intense

The light emitted from an ordinary light source is incoherent, because the radiation emitted from different atoms has no definite phase relationship with each other. For interference of light, coherent sources are essential. Two independent sources cannot act as coherent sources. For experimental purposes, from a single source, two coherent sources are obtained. In recent years, some sources have been developed, which are highly coherent known as LASER. The word 'Laser' is an acronym for Light Amplification by Stimulated Emission of Radiation. The difference between ordinary light and laser beam is pictorially depicted in Fig .

The laser beam (i) is monochromatic. (ii) is coherent, with the waves, all exactly in phase with one another, (iii) does not diverge at all and (iv) is extremely intense

An atom may undergo transition between two energy states E1 and E2, if it emits or absorbs a photon of the appropriate energy E2 - E1 = hν.

The life time of atoms in the excited E1 state is         normally 10-8  second. Some  of the excited        energy levels have greater life    times for atoms (10-3s). Such energy levels are called as the metastable states. If the excited energy level is an ordinary level, the excited atoms return to the lower (or) ground energy state immediately without the help of any external agency. During this transition (Fig), a photon of energy E2-E1 = hν is emitted. This is called spontaneous emission. 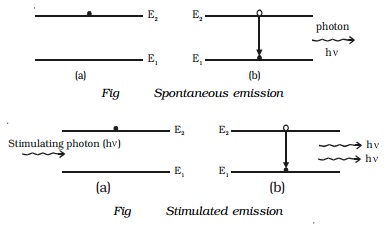 If the excited state is a metastable state, the atoms stay for some time in these levels. The atoms in such metastable state can be brought to the lower energy levels with the help of photons of energy hν = E2 - E1. During this process, a photon of energy E2 - E1 = hν is emitted. This is known as stimulated emission (or) induced emission (Fig 6.28). A photon produced by stimulated emission is called secondary photon (or) stimulated photon. The secondary photon is always in phase with the stimulating photon. These photons in turn stimulate the emission further and the process continues to give a chain - reaction. This is called laser action and by this action all the emitted photons having same energy and same frequency are in phase with each other. Hence, a highly monochromatic, perfectly coherent, intense radiation is obtained in laser.

(i)    There must be an inverted population i.e. more atoms in the excited state than in the ground state.

(ii) The excited state must be a metastable state.

The emitted photons must stimulate further emission. This is achieved by the use of the reflecting mirrors at the ends of the system.