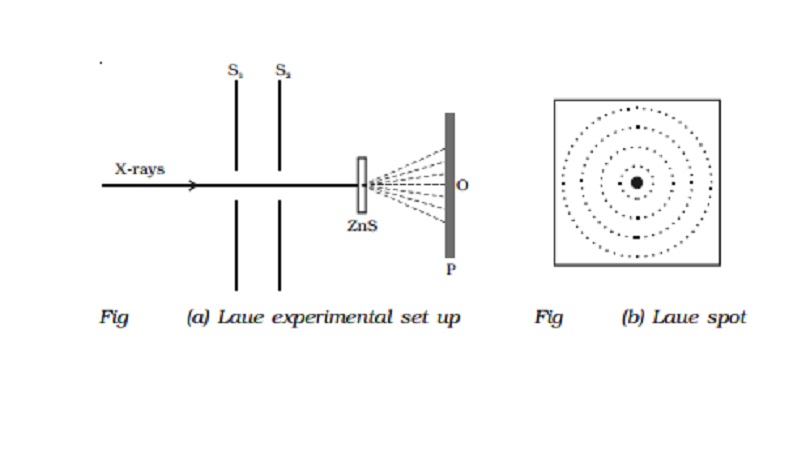 Von Laue, in 1913, suggested that a crystal can act as a three dimensional grating for an X-ray beam.

Von Laue, in 1913, suggested that a crystal can act as a three dimensional grating for an X-ray beam. The experimental arrangement used to produce diffraction in X-rays by Laue is shown in Fig (a). X-rays from the X-ray tube is collimated into a fine beam by two slits S1 and S2. The beam is now allowed to pass through a zinc sulphide (ZnS) crystal. The emergent rays are made to fall on a photographic plate P. The diffraction patten so obtained consists of a central spot at O and a series of spots arranged in a definite pattern about O as shown in Fig 6.17b. The central spot is due to the direct beam, whereas the regularly arranged spots are due to the diffraction pattern from the atoms of the various crystal planes. These spots are known as Laue spots. The Laue experiment has established following two important facts :

(ii) The atoms in a crystal are arranged in a regular three dimensional lattice.

X-rays are electromagnetic waves of short wavelength in the range of 0.5 Ĺ to 10 Ĺ. Roentgen was awarded Nobel prize in 1901 for the discovery of X-rays.