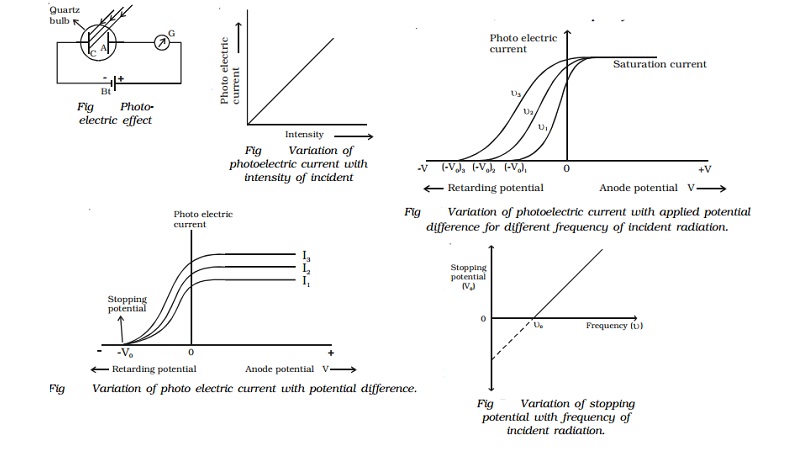 Photoelectric emission is the phenomena by which a good number of substances, chiefly metals, emit electrons under the influence of radiation such as γ rays, X-rays, ultraviolet and even visible light.

Dual Nature of Radiation and Matter and Relativity

The true nature of light is difficult to assess. Experiments showed that light exhibited wavelike properties of diffraction and interference. On the other hand, photoelectric effect indicates that light has the aspects of a particle photon, with both energy and momentum. Thus light exhibits a wave-particle duality.

The wave-particle duality was extended to particles as matter waves by Louis de Broglie. His theoretical study on the nature of particles and waves led to the invention of a new mechanics of particles called quantum mechanics.

Photoelectric emission is the phenomena by which a good number of substances, chiefly metals, emit electrons under the influence of radiation such as γ rays, X-rays, ultraviolet and even visible light. This effect was discovered by Heinrich Hertz in 1887 while working with resonance electrical circuits. A year later, Hallwachs, Elster and Geitel investigated the phenomenon with a simple experimental arrangement.

Hallwachs experimental set-up to study the photo electric effect is shown in Fig  It consists of an evacuated quartz bulb with two zinc plates cathode C and anode A. The plates are connected to a battery and a sensitive galvanometer. In the absence  of  any  radiation  incident  on  the plates, there is no flow of current and hence there is no deflection in the galvanometer. 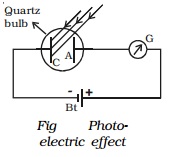 But, when an electro magnetic radiation like ultraviolet radiation is allowed to fall on the plate C which is connected to the negative terminal of the battery, a current begins to flow, indicated by the deflection in the galvanometer (G). But, when ultraviolet radiation is made to fall on A, there is no deflection in the galvanometer. These observations reveal that the particles emitted by the plate C due to the photoelectric effect are negatively charged. These particles were found to be electrons. The observed current known as the photoelectric current is due to the flow of electrons.

Effect of intensity of incident radiation on photo electric current

Keeping  the  frequency  of  the        Photo electric incident  radiation  and  the  potential          difference between the cathode and the anode at constant values, the intensity of       incident radiation is varied. The corresponding  photoelectric current is measured in the microammeter.

It is found that the photo electric      current  increases  linearly  with  the intensity      of incident radiation (Fig). 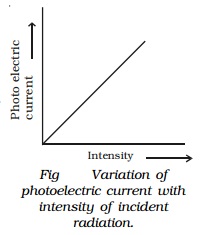 Effect of potential difference on the photoelectric current 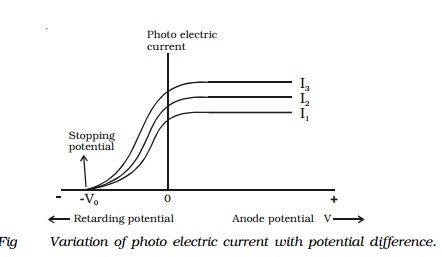 If m is the mass of the photo electron emitted with a velocity vmax then the kinetic energy associated with it is ˝ mv2max.

The above equation indicates that the stopping potential depends upon the velocity of the fastest electron.

Effect of frequency of incident radiation on stopping potential

It is concluded from the graph that, the maximum kinetic energy of the photoelectrons varies linearly with the frequency of incident radiation but is independent of its intensity. 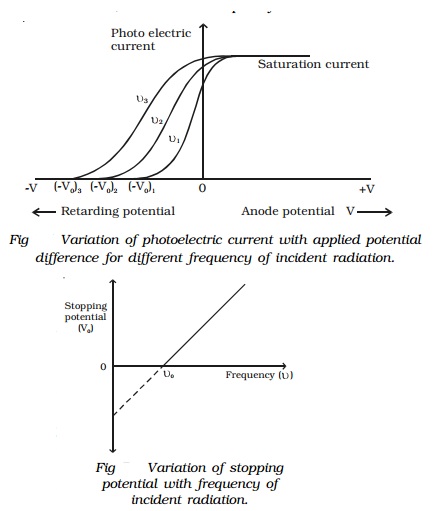 The experimental observations on photoelectric effect may be summarized as follows, which are known as the fundamental laws of photoelectric emission.

1.     For a given photo sensitive material, there is a minimum frequency called the threshold frequency, below which emission of photoelectrons stops completely, however great the intensity may be.

2.     For a given photosensitive material, the photo electric current is directly proportional to the intensity of the incident radiation, provided the frequency is greater than the threshold frequency.

3.     The photoelectric emission is an instantaneous process. i.e. there is no time lag between the incidence of radiation and the emission of photo electrons.

4.     The maximum kinetic energy of the photo electrons is directly proportional to the frequency of incident radiation, but is independent of its intensity.

According to Einstein, the emission of photo electron is the result of the interaction between a single photon of the incident radiation and an electron in the metal. When a photon of energy hν is incident on a metal surface, its energy is used up in two ways :

2.     The remaining energy of the photon is used to impart kinetic energy to the liberated electron.

If m is the mass of an electron and v, its velocity then

This equation is known as Einstein's photoelectric equation.

When the frequency (ν) of the incident radiation is equal to the threshold frequency (νo) of the metal surface, kinetic energy of the electron is zero. Then equation (2) becomes,

Substituting the value of W in equation (2) we get,

This is another form of Einstein's photoelectric equation.

This is an equation of a straight line. Millikan verified equation (3) experimentally and found that it is in harmony with the observed facts.