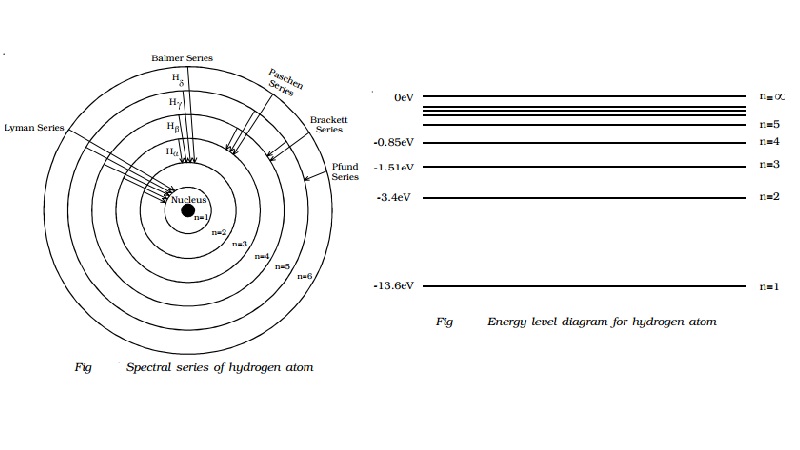 Whenever an electron in a hydrogen atom jumps from higher energy level to the lower energy level, the difference in energies of the two levels is emitted as a radiation of particular wavelength.

When the electron jumps from any of the outer orbits to the first orbit, the spectral lines emitted are in the ultraviolet region of the spectrum and they are said to form a series called Lyman series (Fig). 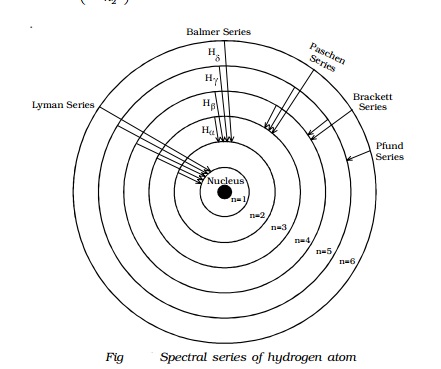 The wave number of the Lyman series is given by,

When the electron jumps from any of the outer orbits to the second orbit, we get a spectral series called the Balmer series. All the lines of this series in hydrogen have their wavelength in the visible region. Here n1=2, n2 = 3,4,5 …

The wave number of the Balmer series is,

This series consists of all wavelengths which are emitted when the electron jumps from outer most orbits to the third orbit. Here n2 = 4,5,6 … and n1 = 3. This series is in the infrared region with the wave number given by

The series obtained by the transition of the electron from n2 = 5, 6... to n1 = 4 is called Brackett series. The wavelengths of these lines are in the infrared region. The wave number is,

The lines of the series are obtained when the electron jumps from any state n2 = 6, 7... to n1=5. This series also lies in the infrared region. The wave number is, 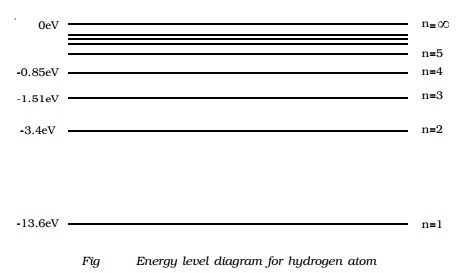 The energy of the electron in the nth orbit of the hydrogen atom is given by,

Energy associated with the first orbit of the hydrogen atom is,

It is called ground state energy of the hydrogen atom. Energy associated with the second orbit is given by,

Therefore, it is seen from the above values, that, the energy associated with a state becomes less negative and approaches closer and closer to the maximum value zero corresponding to n = ∞inf.

Taking these energies on a linear scale, horizontal lines are drawn which represent energy levels of the hydrogen atom (Fig). This diagram is known as energy level diagram.

The sodium vapour lamp is commonly used in the laboratory as a source of monochromatic (single colour) light. Sodium vapour lamps and mercury lamps have been used for street lighting, as the two lamps give a more intense light at comparatively low cost. The mercury light is a composite light consisting of all colours in the visible spectrum. The wavelength of prominent lines emitted by the mercury source is presented in Table 6.1. The two lamps work on the principle of hot cathode positive column. Since, sodium and mercury atoms are in the vapour state, they emit line spectra. The sodium vapour lamp emits yellow light of wavelength 5896Ĺ and 5890Ĺ. These lines are called sodium D1 and D2 lines.