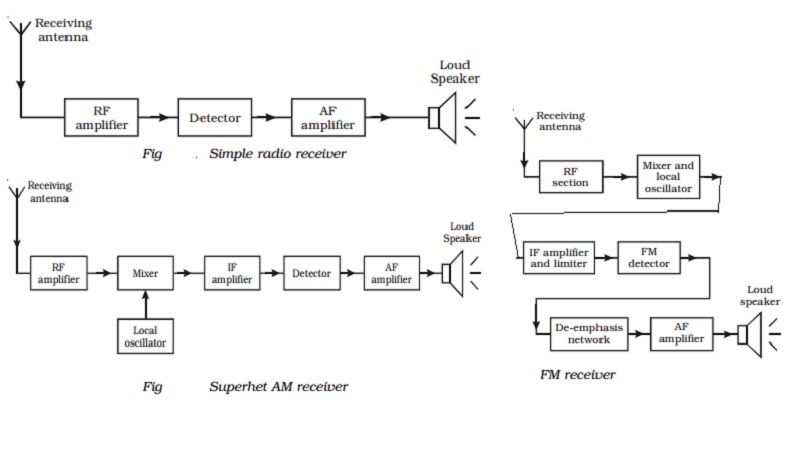 A simple (or) straight radio receiver

The functional block diagram of a simple radio receiver is shown in Fig . The receiving antenna receives the radiowaves from different broadcasting stations. The desired radiowave is selected by the radio frequency amplifier, which employs a tuned parallel circuit. The tuned RF amplifier amplifies this selected radiowave. The amplified radiowave is fed to the detector circuit which consists of a PN diode. This circuit extracts the audio signal from the radiowave. The output of the detector is the audio signal, which is amplified by one or more stages of audio amplification. The amplified audio signal is given to the loud speaker for sound reproduction.

The functional block diagram of AM receiving system of superheterodyne type is shown in Fig .

The RF amplifier uses a tuned parallel circuit. The radiowaves from various broadcasting stations are intercepted by the receiving antenna and are coupled to this stage. This stage selects the desired radiowave and enhances the strength of the wave to the desired level.

For example, if 600 kHz station is tuned, then local oscillator will produce a frequency of 1055 kHz and consequently the output from the mixer will have frequency of 455 kHz. By achieving this fixed intermediate frequency, the amplifier circuit in such receivers can be made to operate with maximum stability, selectivity and sensitivity.

The output of the mixer circuit is fed to the tuned IF amplifier. This amplifier is tuned to one frequency (i.e. 455 KHz ) and is amplified.

The output from the IF amplifier is coupled with input of a detector. The audio signals are extracted from the IF output. Usually a diode detector circuit is used because of its low distortion and excellent audio fidelity (reproducing ability).

The detected AF signal is usually weak and so it is further amplified by the AF amplifier. Then, the output signal from the amplifier is fed to the loud speaker, which converts the audio signal into sound waves corresponding to the original sound at the broadcasting station.

The RF section selects the incoming modulated signals and is amplified. It is then fed into the mixer and local oscillator. Here the frequency of the modulated signal is changed to intermediate frequency. For FM receivers, this IF is 10.7 MHz. The intermediate frequency wave is amplified using IF amplifier and then its amplitude is maintained constant using a limiter*. The output of this section is applied to the FM detector which demodulates the modulated wave. The AF signal from the FM detector is then passed on through a de-emphasis network, where the various frequencies attain their original power distribution. Finally it is fed into the loud speaker after performing AF amplification.