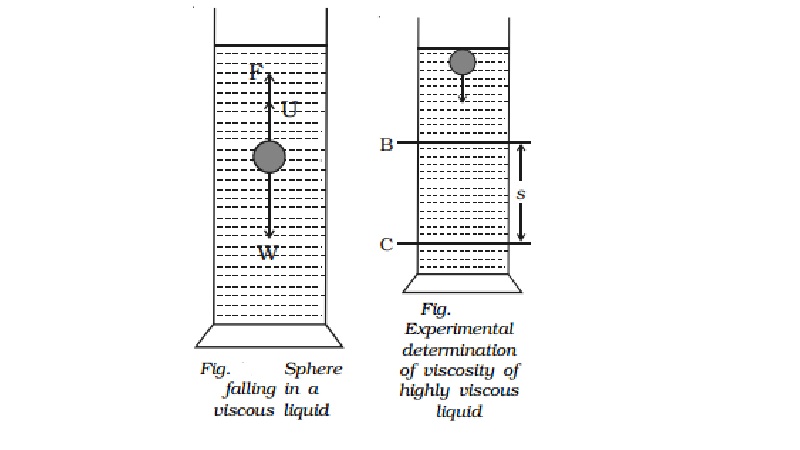 When a body falls through a highly viscous liquid, it drags the layer of the liquid immediately in contact with it. This results in a relative motion between the different layers of the liquid.

When a body falls through a highly viscous liquid, it drags the layer of the liquid immediately in contact with it. This results in a relative motion between the different layers of the liquid. As a result of this, the falling body experiences a viscous force F. Stoke performed many experiments on the motion of small spherical bodies in different fluids and concluded that the viscous force F acting on the spherical body depends on

(i)    Coefficient of viscosity η of the liquid

(ii) Radius a of the sphere and

This is Stoke's law.

Consider a metallic sphere of radius 'a' and density ρ to fall under gravity in a liquid of density σ. The viscous force F acting on the metallic sphere increases as its velocity increases. A stage is reached when the weight W of the sphere becomes equal to the sum of the upward viscous force F and the upward thrust U due to buoyancy (Fig.). Now, there isno net force acting on the sphere and it moves down with a constant velocity v called terminal velocity.

Terminal velocity of a body is defined as the constant velocity acquired by a body while falling through a viscous liquid.

According to Stoke's law, the viscous force F is given by F = 6πηav.

The buoyant force U = Weight of liquid displaced by the sphere

The coefficient of highly viscous liquid like castoroil can be determined by Stoke's method. The experimental liquid is taken in a tall, wide jar. Two marking B and C are marked as shown in Fig.. A steel ball is gently dropped in the jar.

The marking B is made well below the free surface of the liquid so that by the time ball reaches B, it would have acquired terminal velocity v.

When the ball crosses B, a stopwatch is switched on and the time taken t to reach C is noted. If the distance BC is s, then terminal velocity v =s / t .

The expression for terminal velocity is

Knowing a, ρ and σ, the value of η of the liquid is determined.