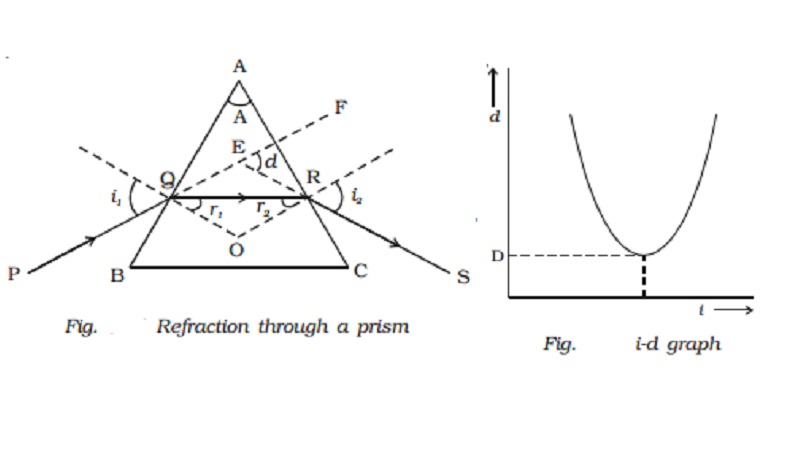 A prism is a transparent medium bounded by the three plane faces. Out of the three faces, one is grounded and the other two are polished. The polished faces are called refracting faces.

Fig. shows the cross section of a triangular prism ABC, placed in air. Let ?A? be the refracting angle of the prism. A ray of light PQ incident on the refracting face AB, gets refracted along QR and emerges along RS. The angle of incidence and refraction at the two faces are i1, r1 , r2  and i2  respectively. The angle between the incident ray PQ and the emergent ray RS is called angle of deviation, d. In the ∆QER, the exterior angle FER = angle  EQR + angle ERQ 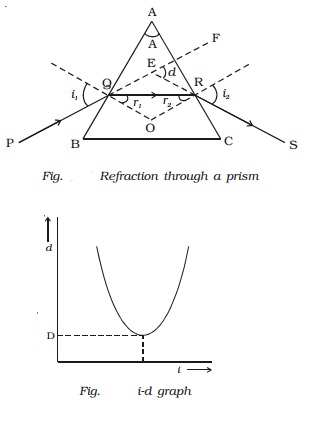 In the quadrilateral AQOR, the angles at Q and R are right angles

Also, from the ∆QOR

For a given prism and for a light of given wavelength, the angle of deviation depends upon the angle of incidence.

As the angle of incidence i gradually increases, the angle of deviation d decreases, reaches a minimum value D and then

increases. D is called the angle of minimum deviation. It will be seen from the graph (Fig. ) that there is only one angle of

incidence for which the deviation is a minimum.

At the minimum deviation