Dispersion of light and Dispersive power 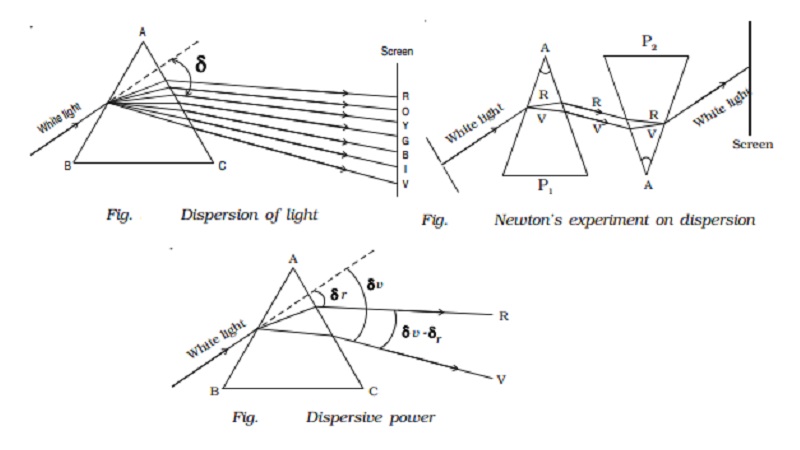 In the visible region of spectrum, the spectral lines are seen in the order from violet to red. The colours are given by the word VIBGYOR (Violet,Indigo, Blue, Green,Yellow, Orange and Red) (Fig. ) 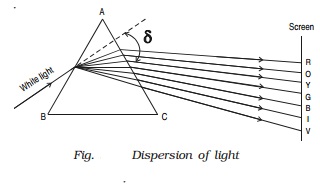 The origin of colour after passing through a prism was a matter of much debate in physics. Does the prism itself create colour in some

way or does it only separate the colours already present in white light?

Sir Isaac Newton gave an explanation for this. He placed another similar prism in an inverted position. The emergent beam from the first 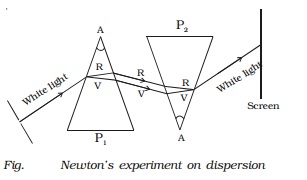 The speed of light is independent of wavelength in vacuum. Therefore vacuum is a non-dispersive medium in which all colours travel with the same speed.

If the angle of prism is small of the order of 10o, the prism is said to be small angled prism. When rays of light pass through such prisms

If A be the refracting angle of a small angled prism and δ the angle of deviation, then the prism formula becomes ? = [sin(A+δ)/2]/sin(A/2) 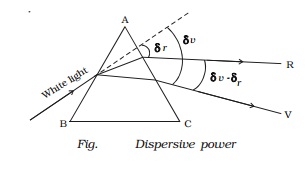 For small angles A and δ,

If δv  and δr are the deviations produced for the violet and red rays and ?v and ?r are the corresponding refractive indices of the material of the small angled prism then,

δv - δr is called the angular dispersion which is the difference in deviation between the extreme colours (Fig. ).

If δy  and ?y  are the deviation and refractive index respectively for yellow ray (mean wavelength) then,

The expression ( δv ?δ r)  / (δy) is known as the dispersive power of the material of the prism and is denoted by ω.

The dispersive power of the material of a prism is defined as the ratio of angular dispersion for any two wavelengths (colours) to the deviation of mean wavelength.