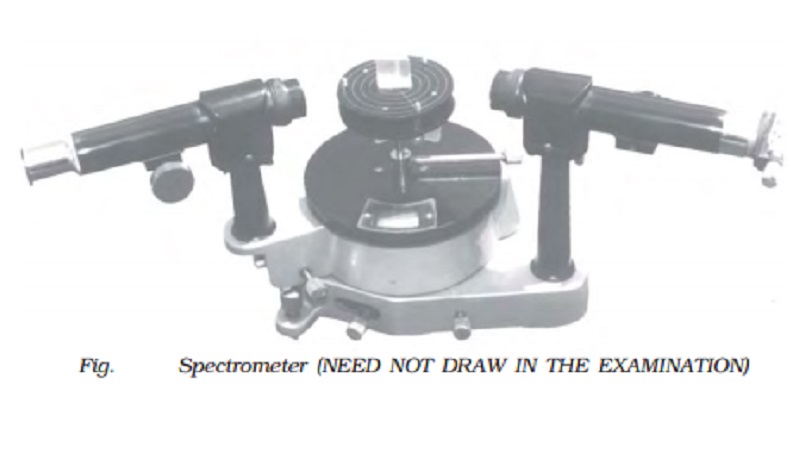 Determination of the refractive index of the material of the prism

The prism is placed on the prism table with its refracting edge facing the collimator as shown in Fig . The slit is illuminated by a sodium vapour lamp. 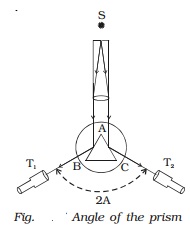 The parallel rays coming from the collimator fall on the two faces AB and AC.

The telescope is rotated to the position T1  until the image of the slit, formed by the reflection at the face AB is made to coincide

The prism is placed on the prism table so that the light from the collimator falls on a refracting face, and the refracted image is observed through the telescope (Fig. ). The prism table is now rotated so that the angle of deviation decreases. A stage comes when the image stops for a moment and if we rotate the prism table further in the same direction, the image is seen to recede and the angle of deviation increases. The vertical cross wire of the telescope is made to coincide with the image of the slit where it turns back. This gives the minimum deviation position. The readings of the verniers are noted. Now the prism is removed and the telescope is turned to receive the direct ray and the vertical cross wire is made to coincide with the image. The readings of the verniers are noted. The difference between the two readings gives the angle of minimum deviation D.

The refractive index of a liquid may be determined in the same way using a hollow glass prism filled with the given liquid.