We are moving toward an unflattering portrait of human reasoning. In logic, one starts with the premises and asks whether a conclusion follows from these premises.

We are moving toward an unflattering portrait of human reasoning. In logic, one starts with the premises and asks whether a conclusion follows from these premises. In studies of confirmation bias or syllogistic reasoning, however, people seem to do the opposite: They start with the conclusion, and use that as a basis for evaluating the argument. Thus, they accept syllogisms as valid if the conclusion seems believable on its own, and they count evi- dence as persuasive if it leads to a view they held in the first place. We also know, however, that humans are capable of high-qualityreasoning. After all, we do seem able to manage the pragmatic and social demands of our world, and we’re able to make good use of our knowledge. None of this would be possible if we were utterly inept in reasoning; reasoning errors, if they occurred all the time, would trip us up in many ways and lead to a succession of beliefs completely out of line with reality.

In addition, impressive skill in reasoning is visible in some for-mal settings. Humans do, after all, sometimes lay out carefully argued positions on political matters and academic questions.

Scientists trace through the implications of their theories as they develop new cancer-fighting drugs. And for that matter, mathematicians and logicians rely on deduction as a way of proving their theorems.

How should we think about this mixed pattern? Why is our reasoning sometimes accurate and sometimes filled with errors? Important insights into these questions come from studies of the selection task. In the standard version of this task, participants are shown four cards, like those in Figure 9.13. They’re told that these cards may or may not follow a simple rule: “If there is a vowel on one side of the card, there must be an even number on the other side.” Their task is to figure out which cards to turn over to deter-mine whether the cards do, in fact, follow this rule; they can turn over however many cards they think are necessary—just one, perhaps; or two, three, or all four. 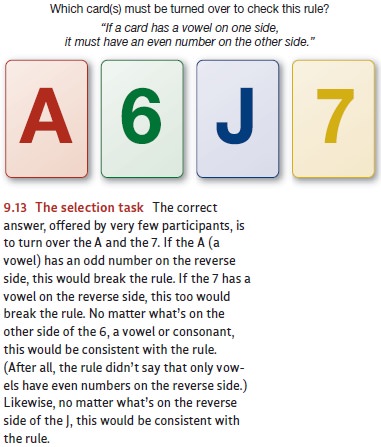 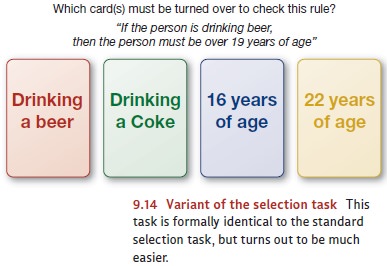 Performance is much better, though, in other versions of the selection task. In one study, participants were shown the four cards pictured in Figure 9.14 and were told that each card identified the age of a customer at a bar and what that customer was drinking. Their task was to evaluate this rule: “If a person is drinking beer, then the person must be over 19 years of age.” This problem is logically identical to the original selection task, but performance was vastly better—three-fourths of the participants correctly chose the cards “drinking a beer” and “16 years old” (Griggs & Cox, 1982).

The contrast between this task and the standard version of the selection task makes it clear that the content of the problem matters—and so how well we reason depends on what we are reasoning about. But why is this? One proposal comes from an evolutionaryperspective on psychology and begins with the suggestion that our ancient ancestors didn’t have to reason about abstract matters like As and 7s, or vowels and even num-bers. Instead, our ancestors had to worry about issues involving social interactions, including issues of betrayal and cheating: “I asked you to gather firewood; have you done it, or have you betrayed me?” “None of our clan is supposed to eat more than one share of meat; is that guy perhaps cheating and eating too much?”

Leda Cosmides and John Tooby have argued that if our ancestors needed to reason about these issues, then individuals who were particularly skilled in this reasoning would have had a survival advantage; and so, little by little, they would have become more numerous within the population, while those without the skill would have died off. In the end, only those skillful at social reasoning would have been left—and we, as their descendants, inherited their skills. This is why, according to Cosmides and Tooby, we perform badly with problems like the “classic” selection task (for which we’re evolutionarily unprepared) but perform well with the drinking-beer problem, since it involves a specific content—cheating—for which we are well prepared (Cosmides, 1989; Cosmides & Tooby, 1992, 2005; Cummins & Allen, 1998; Gigerenzer & Hug, 1992).

A different approach emphasizes learning across the life span of the individual, rather than learning across the history of our species. Specifically, Patricia Cheng and Keith Holyoak have argued that, in our everyday lives, we often need to reason about down-to-earth issues that can be cast as “if-then” relationships. One example involves permission, in which we must act according to this rule: “If I want to do X, then I better get permission.” Other examples include obligation and cause-effect rela-tionships: “If I buy him lunch, then he’ll probably lend me his iPod.” Because of this experience, we’ve developed reasoning strategies that apply specifically to these prag-matic issues. In the laboratory, therefore, we’ll reason well if an experimenter gives us a task that triggers one of these strategies—but not otherwise. Thus, for example, the drinking-beer problem involves permission, so it calls up our well-practiced skills in thinking about permission. The same logic problem cast in terms of vowels and even numbers has no obvious connection to everyday reasoning, so it calls up no strategy and leads to poor performance (Cheng & Holyoak, 1986; Cheng, Holyoak, Nisbett, & Oliver, 1985; for a different perspective on the selection task, see Ahn & Graham, 1999).

The available evidence doesn’t favor one of these accounts over the other, mostly because the two proposals have a great deal in common. Both proposals, one cast in the light of evolution, one in the light of everyday experience, emphasize that the content of a problem influences our reasoning—and so, as we said earlier, how we reason depends on the mental representations we’re reasoning about. Likewise, both proposals empha-size pragmatic considerations—the need to reason well about cheaters and betrayal, in one view, or the need to reason about permission or obligation, in the other. Above all, both proposals emphasize the uneven quality of human reasoning. If we encounter a problem of the “right sort,” our reasoning is usually accurate. (We note, though, that even with the drinking-beer problem, some people do make errors!) If, however, we encounter a problem that doesn’t trigger one of our specialized reasoning strategies, then performance is—as we’ve seen—often poor.