Relying on subroutines also has another advantage: The modular units are generally well practiced, and this allows the problem solver to focus attention on the larger-scale plan rather than worry about the details of carrying out the plan.

Relying on subroutines also has another advantage: The modular units are generally well practiced, and this allows the problem solver to focus attention on the larger-scale plan rather than worry about the details of carrying out the plan. In fact, this is one reason why problems that seem impossible for the novice are absurdly easy for the expert: Even when the expert is facing a novel problem, she’s likely to rely on several familiar subroutines that are already available as “chunks” in memory. Thus, the expert taxi driver gives little thought to maneuvering through traffic and so can focus his thoughts on the more general task of navigation. The novice driver must focus on the maneuvering—and while preoccupied with this task, he may miss his exit.

It’s plainly helpful, then, that subroutines can be executed without much thought; this frees up your attention for other aspects of the task. Still, in some circumstances this automaticity (the ability to do a task without paying attention to it) can create problemsof its own, because automatic actions, once set in motion, are often difficult to turn off or modify.

A striking example is known as the Stroop effect, named after its discoverer (Stroop, 1935). This effect hinges on the fact that many of the steps involved in ordinary read-ing have become quite automatic—which is a good thing, because it means that when you’re reading a text, you can focus on the ideas being expressed rather than the mechanics of reading itself. Even so, this automaticity can cause troubles of its own. 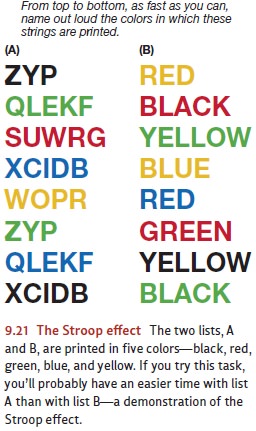 To demonstrate the Stroop effect, people are asked to name the colors in which groups of letters are printed (Figure 9.21). If the letters are random sequences (fwis,sgbr) or irrelevant words (chair, tape), this task is rather easy. But if the letters formcolor names (yellow, red), the task becomes much harder. Thus, a participant might see red printed in green ink, blue in brown ink, and so on. Her task is simply to name the ink color, so she should say “green, brown” in this example. But in this setting, the participant cannot help but read the words, and this produces a strong compet-ing response: She’s likely to respond very slowly, because while trying to name the ink colors, she is fighting the tendency to read the words themselves aloud. (For more on automaticity, see Bargh & Ferguson, 2000; Pashler, Johnston, & Ruthruff, 2000; Stolz & Besner, 1999.)