Decision Making: Too Many Options

Framing effects and poor affective forecasting are both obstacles to consistent, high-quality decision making. Yet another obstacle comes from a surprising source, because our decisions are sometimes undermined by our simply having too many options to choose from (Figure 9.16).

People like to be in control of their lives. Indeed, evidence suggests that people are healthier and happier when they can make their own choices rather than letting some-one else make decisions for them . But in order to make choices, we need to have options—otherwise, there are no choices to make! And presumably, if hav-ing a few options is a good thing, then having more options is better still—because then we have enormous freedom to choose exactly the option that suits us best.

As a number of studies have made clear, though, this is a setting in which it’s possi-ble to have “too much of a good thing.” In particular, if people are given too many choices, they’re likely to make no selection at all. In one study, visitors to a grocery store encoun-tered a table offering free samples of high-quality jams (Iyengar & Lepper, 2000). In one condition of the experiment, the table offered 6 varieties, and shoppers could taste as many of these as they wished. In another condition, the table offered 24 varieties, and again shoppers could choose the ones they wanted to try. The shoppers plainly showed a preference for having more options to choose from—of the shoppers who passed the 6-varieties table, 40% stopped to examine the display; of the shoppers who passed the 24-varieties table, 60% stopped to look.

Unmistakably, then, people like having lots of choices. However, once they have those choices, they seem put off by the sheer variety of options. Of the (many) shop-pers who visited the 24-varieties table, only 3% actually purchased a jar of jam. In sharp contrast, of the shoppers who approached the 6-varieties table, nearly 30% purchased a jar—a 10-to-1 differential!

In addition, when we have too many options or too much flexibility we often end up less satisfied with our selection. In one study, participants were asked to select a photo-graph that they would keep at the end of the experiment (D. Gilbert & Ebert, 2002). Half of the participants were told that they had to make their final choice right away; the other participants were told that they had to make a selection but could revise this choice later if they wished to. Participants liked having this flexibility, but in fact they didn’t benefit from it at all: Participants who had to stick with their initial choice actu-ally ended up, in the long run, more content with their selection than did the partici-pants who had the option of revising their choice.

Several factors contribute to these results, but part of the explanation lies in the impact of making comparisons. We noted earlier (in our discussion of loss aversion) that people are keenly sensitive to losses and do all they can to avoid them. In the same way, people are also very sensitive to an option’s disadvantages, and so they give these more weight than the advantages (the gains) associated with the same option. Thus, in concrete terms, when people compare one photograph to another, or one jam to another, they pay special attention to the things they don’t like about each option (its limitations and drawbacks) and attend less to the aspects they do like. As a result, the comparison ends up highlighting the negative features of each choice—with the result that all the options generally look worse after the comparison (i.e., their drawbacks are now salient) than they did before.

Let’s now add the fact that, when you have more options to consider, you’ll end up doing more comparisons among the options. Likewise, if you have the flexibility to revise your choice, this too encourages more comparison—because you make your selection, but continue mulling over your options, to make sure you picked the best one. In either case, more comparison translates into even greater salience for each option’s disadvantages. Thus, in the jam experiment, the greater variety (leading to more com-parisons) makes all the choices look worse—and so you choose none of them. In the photography experiment, the extended comparison makes your selected option look worse—and so the option to revise your choices leaves you less content with the deci-sion’s outcome.

In fact, this negative effect of making comparisons can be documented directly. In a study that we first met in the prologue, people in one condition were invited to evaluate options one by one—they were asked, for example, the highest price they would be willing to pay for a 1-year subscription to People magazine (Brenner, Rottenstreich, & Sood, 1999). In a different condition, people were asked about four different magazines (Figure 9.17). They were first asked to rank the magazines from most favorite to least favorite and then asked the price they would pay for each one. The latter condition was designed to encourage comparisons, and this had a power-ful impact: When the participants rated People magazine on its own, they were will-ing (on average) to pay more than $21 per year for a subscription. But when they evaluated People relative to other magazines, the comparison made People less attrac-tive; and now people were willing to pay (on average) only $16 per year—almost a 25% decrease. 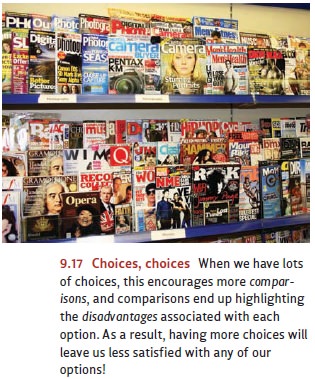