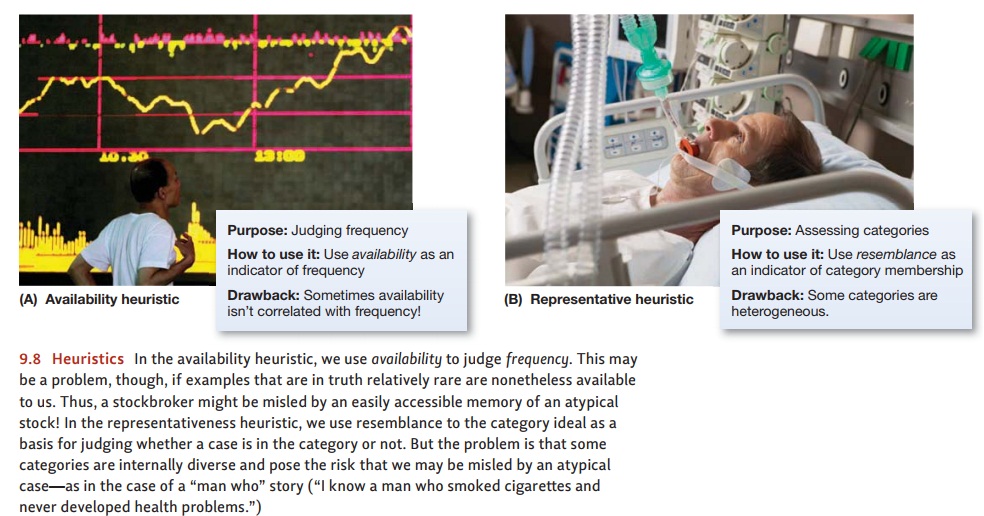 When our judgments hinge on frequency estimates, we rely on the availability heuristic.

When our judgments hinge on frequency estimates, we rely on the availability heuris-tic. Sometimes, though, our judgments hinge on categorization, and then we turn to a different heuristic (Figure 9.8). For example, think about Marie, who you met at lunch yesterday. Is she likely to be a psychology major? If she is, you can rely on your broader knowledge about psych majors to make some forecasts about her—what sorts of con-versations she’s likely to enjoy, what sorts of books she’s likely to read, and so on. 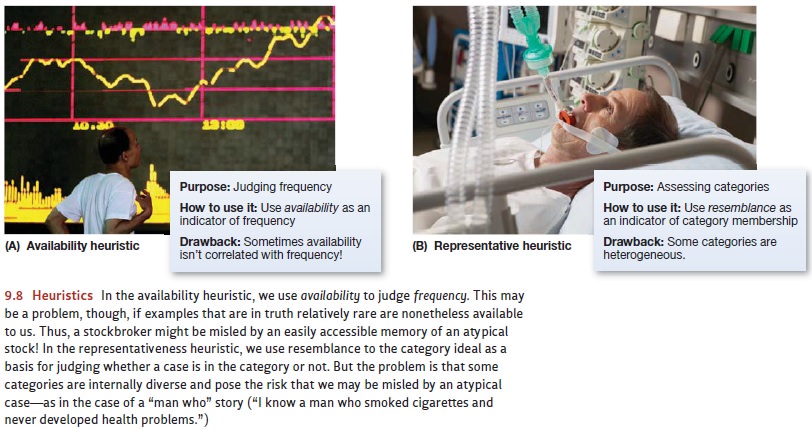 If during lunch you asked Marie what her major is, then you’re all set—able to apply your knowledge about the category to this particular individual. But what if you didn’t ask her about her major? You might still try to guess her major, relying on the representative-ness heuristic. This is a strategy of assuming that each member of a category is “represen-tative” of the category—or, said differently, a strategy of assuming that each category is relatively homogeneous, so that every member of the category resembles every other mem-ber. Thus, if Marie resembled other psych majors you know (in her style of conversation, or the things she wanted to talk about), you’re likely to conclude that she is in fact a psych major—so you can use your knowledge about the major to guide your expectations for her.

This strategy—like the availability heuristic—serves us well in many settings, because many of the categories we encounter in our lives are homogeneous in important ways.

People don’t vary much in the number of fingers or ears we have. Birds uniformly share the property of having wings and beaks, and hotel rooms share the property of having beds and bathrooms. This uniformity may seem trivial, but it plays an enormously important role: It allows us to extrapolate from our experiences, so that we know what to expect the next time we see a bird or enter a hotel room.

Even so, evidence suggests that we overuse the representativeness strategy, extrapo-lating from our experiences even when it’s clear we should not. This pattern is evident, for example, whenever someone offers a “man who” or “woman who” argument: “What do you mean, cigarettes cause cancer? I have an aunt who smokes cigarettes, and she’s perfectly healthy at age 82!” Such arguments are often presented in conversations as well as in more formal settings (political debates, or newspaper editorial pages), pre-sumably relying on the listener’s willingness to generalize from a single case. What’s more, these arguments seem to be persuasive: The listener (to continue the example) seems to assume that the category of all cigarette smokers is uniform, so that any one member of the category (including the speaker’s aunt) can be thought of as representa-tive of the entire group. As a result, the listener draws conclusions about the group based on this single case—even though a moment’s reflection might remind us that the case may be atypical, making the conclusions unjustified.

caring guard, participants reported more positive views of the prison system. Remarkably, though, participants who had been told clearly that the guard was atypical were just as willing to draw conclusions from the video as the participants given no warning. Essentially, participants’ reliance on the representativeness heuristic made the warning irrelevant (Hamill, Wilson, & Nisbett, 1980; Kahneman & Tversky, 1972, 1973; Nisbett & Ross, 1980).