When people fall prey to confirmation bias, their thinking seems illogical: “If I know how to pick winners, then I should win my bets. In fact, though, I lose my bets.

When people fall prey to confirmation bias, their thinking seems illogical: “If I know how to pick winners, then I should win my bets. In fact, though, I lose my bets. Therefore, I know how to pick winners.” But could this be? Are people really this illog-ical in their reasoning? One way to find out is by asking people to solve simple prob-lems in logic—for example, problems involving syllogisms. 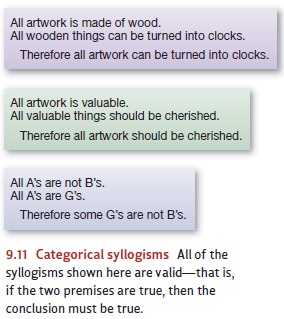 Syllogisms seem straightforward, and so it’s disheartening that people make an enormous number of errors in evaluating them. To be sure, some syllogisms are easier than others—and so participants are more accurate, for example, if a syllogism is set in concrete terms rather than abstract symbols. Still, across all the syllogisms, mistakes are frequent, and error rates are sometimes as high as 70 or 80% (Gilhooly, 1988).

What produces this high error rate? Despite careful instructions and considerable coaching, many participants seem not to understand what syllogistic reasoning requires. Specifically, they seem not to get the fact that they’re supposed to focus only on the relationship between the premises and conclusion. They focus instead on whether the conclusion seems plausible on its own—and if it is, they judge the syllo-gism to be valid (Klauer, Musch, & Naumer, 2000). Thus, they’re more likely to endorse the conclusion “Therefore all artwork should be cherished” in Figure 9.11 than they are to endorse the conclusion “Therefore all artwork can be turned into clocks.” Both of these conclusions are warranted by their premises, but the first is plausible and so more likely to be accepted as valid.

In some ways, this reliance on plausibility is a sensible strategy. Participants are doing their best to assess the syllogisms’ conclusions based on all they know (cf. Evans & Feeney, 2004). At the same time, this strategy implies a profound misunderstanding of the rules of logic (Figure 9.12). With this strategy, people are willing to endorse a bad argument if it happens to lead to conclusions they already believe are true, and they’re willing to reject a good argument if it leads to conclusions they already believe are false. 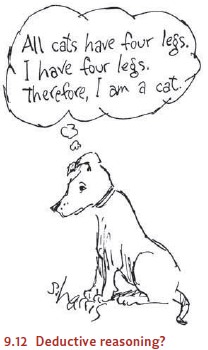