If restructuring is crucial, how can a problem solver go about seeking some new per-spective, some new mental set, when working on a difficult problem?

If restructuring is crucial, how can a problem solver go about seeking some new per-spective, some new mental set, when working on a difficult problem? One way to tackle these issues is by examining cases of problem solving in which someone finds an entirely new and wonderfully productive way to solve a problem. In these cases, we count the problem solution as creative—one that’s both new and valuable—and this leads us to ask: How do creative problem solutions arise?

We can approach this issue by examining individuals who have undeniably been creative—great artists like Picasso or Bach, or innovative scientists like Charles Darwin or Marie Curie. Studies suggest that these creative individuals do tend to have certain things in common, so perhaps we can think of these shared elements as “prerequisites” for great creativity. These individuals, first of all, have an enormous storehouse of knowledge and skills in their domain of achievement. Second, they all tend to be intel-ligent and to have certain personality traits—a willingness to take risks, a willingness to ignore criticism, and an ability to tolerate ambiguous findings or situations. Third, these highly creative people seem to be motivated by the pleasure of their work rather than the promise of external rewards. Finally, there’s an important sense in which these highly creative people seem to have been “in the right place at the right time”—that is, in environments that allowed them freedom, provided the appropriate support, and offered them problems that were “ripe” for solution with the resources available. (For discussion of these “prerequisites” for creativity, see Amabile, 2001; Nakamura & Csikszentmihalyi, 2001; Sawyer, 2006; Sternberg & Dess, 2001.)

But these various factors merely set the stage for creativity; we still need to ask what goes on inside the mind of the creative person. One proposal was offered many years ago by Graham Wallas (1926), who argued that creative thought proceeds through four stages: In the first stage, preparation, the problem solver gathers information about the problem. This stage is typically characterized by periods of hard and often frustrating work on the problem, generally with little progress. In the second stage, incubation, the problem solver sets the problem aside and seems not to be working on it. Wallas argued, though, that the problem solver was continuing to work on the problem during this stage, albeit unconsciously. Thus, the problem solution is continuing to develop, unseen—just like a baby bird develops, unseen, inside the egg. This period of incuba-tion leads to the third stage, illumination, in which some key insight or new idea emerges; this stage paves the way for the fourth stage, verification, in which the problem solver confirms that the new idea really does lead to a solution and works out the details.

Modern scholars are, however, quite skeptical about Wallas’s proposal; let’s focus in particular on his notion of incubation. Wallas based this idea on the many historical accounts in which creative insights arose rather abruptly, when the thinker seemed not be working on the problem at all. Thus, Beethoven and Darwin both reported that their great ideas came to them not while sitting at the piano or a desk, but while riding in a carriage. The great mathematician Poincaré claimed his discoveries arose while he was stepping onto a bus. In the most celebrated case of all, Archimedes allegedly was sitting in a bath-tub when he realized how to measure the volume of a complex shape (Figure 9.25).

The more systematic evidence on this point is, however, mixed. Several studies have shown that time away from a problem does help in finding the problem’s solution, but many other studies find no such effect (Dodds, Ward, & Smith, 2003; Vul & Pashler, 2007; Zhong, Dijksterhuis, & Galinsky, 2008; but also see Sio & Ormerod, 2009). And even when time away from a problem is beneficial, incubation may not be the reason. Time away from a problem may simply allow fatigue and frustration to dissipate, which by itself may be helpful. The time away also may allow problem solvers to shake off unproductive mental sets, so  that  they  can  approach  the  problem  unburdened  by  their  earlier, unhelpful perspective and assumptions (S. Smith & Blankenship, 1989; Vul & Pashler, 2007).

If we set aside Wallas’s ambitious notions, then, where do creative discoveries come from? The answer probably involves relatively straightforward mechanisms. For example, earlier we discussed the notion of spreading activation, in which retrieval of one memory causes activation to spread out to the nearby nodes represent-ing related memories. This sort of unguided memory search, letting the activation spread where the connections take it, is inefficient for 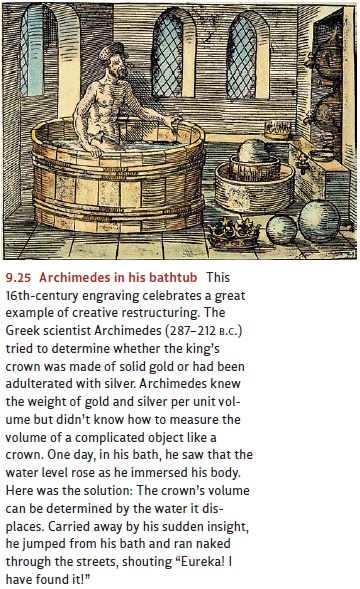 most problem solving—and as we said at the start, problem solving is usually much more orderly than this. It’s guided by your current thoughts, your sense of the goal, and your understanding of the problem’s structure. Even so, an unguided memory search, relying on spreading activation, may be the best bet when the problem solver is otherwise uncertain how to proceed (Schooler, Ohlsson, & Brooks, 1993; Yaniv & Meyer, 1987). And, of course, this spreading activation is more likely to be productive if the problem solver has a lot of knowledge about the domain (and so many ideas that could be activated) and if that knowledge is richly interconnected (so that the activation is more likely to reach the target). Both of these points are typically in place for the individuals we call creative, and this may be a large part of what contributes to creative solutions.