If problem-solving sets can sometimes cause difficulties, then we want to ask: How can these sets be overcome?

If problem-solving sets can sometimes cause difficulties, then we want to ask: How can these sets be overcome? Similarly, we’ve emphasized the importance of subgoals and familiar routines, but what can we do if we fail to perceive the subgoals or are unfamil-iar with the relevant routine?

A number of strategies are helpful when people are stuck on a difficult problem, but one of the most useful is to rely on an analogy. In other words, you can often solve a problem by recalling some previous, similar problem and applying its solution (or a minor variation on it) to your current problem. Thus, a business manager might solve today’s crisis by remembering how she dealt with a similar crisis just a few months back. A psychotherapist might realize how to help one patient by recalling his approach to a similar patient a year ago.

Analogies turn out to be enormously helpful in many settings. They’re useful as a form of instruction, and so students gain understanding of how gas molecules function by thinking about how the balls bump into each other on a pool table; they learn about memory by comparing it to a vast library. Analogies are also a powerful source of discov-eries, and so (for example) scientists expanded their understanding of the heart, yearsago, by comparing it to a pump (Gentner & Jeziorski, 1989). And, of course, analogies are also helpful in solving problems. In one study (Gick & Holyoak, 1980), for example, participants were given this problem:

Suppose a patient has an inoperable stomach tumor. There are certain rays that can destroy this tumor if their intensity is great enough. At this intensity, however, the rays will also destroy the healthy tissue that surrounds the tumor (e.g., the stomach walls, the abdominal muscles, and so on). How can the tumor be destroyed without damaging the healthy tissue through which the rays must travel on their way?

The problem is difficult; and in this experiment, 90% of the participants failed to solve it. A second group, however, did much better. Before tackling the tumor problem, they read a story about a general who hoped to capture a fortress. He needed a large force of soldiers for this, but all of the roads leading to the fortress were planted with mines. Small groups of soldiers could travel the roads safely, but the mines would be detonated by a larger group. How, therefore, could the general move all the soldiers he would need toward the fortress? He could do this by dividing his army into small groups and send-ing each group via a different road. When he gave the signal, all the groups marched toward the fortress, where they converged and attacked successfully.

The structure of the fortress story is similar to that of the tumor problem. In both cases, the solution is to divide the “conquering” force so that it enters from several dif-ferent directions. Thus, to destroy the tumor, several weak rays can be sent through the body, each from a different angle. The rays converge at the tumor, inflicting their com-bined effects just as desired (Figure 9.23). 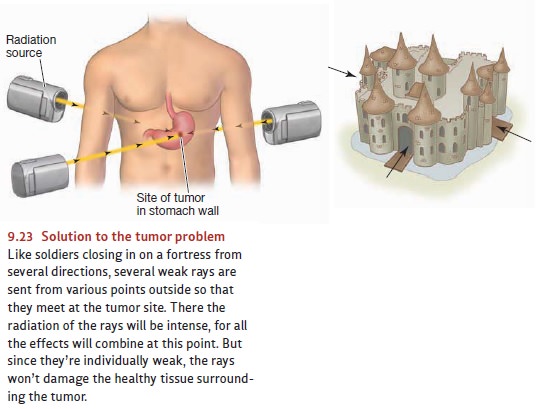 With no hints or analogies to draw on, only 10% of the participants were able to solve the tumor problem. However, if they were given the fortress story and told that it would help them, most (about 80%) did solve it. Obviously, the analogy was quite help-ful. But just knowing the fortress story wasn’t enough; participants also had to realize that the story was pertinent to the task at hand—and, surprisingly, they often failed to make this connection. In another condition, participants read the fortress story but were given no indication that this story was relevant to their task. In that case, only 30% solved the tumor problem (Gick & Holyoak, 1980, 1983).

Clearly, analogies are helpful. Even so, people often fail to use them, even if the plau-sible analogue is available in their memory. Is there anything we can do, therefore, to encourage the use of analogies? It turns out that there is. Evidence suggests, for exam-ple, that people are more likely to use analogies if they’re encouraged to focus on the underlying dynamic of the problem (e.g., the fortress problem involves converging forces) rather than its superficial features (e.g., the problem involves mines). This focus on the underlying dynamic calls attention to the features shared by the problems, help-ing people to see the relevance of the analogies and enabling them to map one problem onto another (Blanchette & Dunbar, 2000; Catrambone, 1998; Cummins, 1992; Dunbar & Blanchette, 2001; Needham & Begg, 1991).