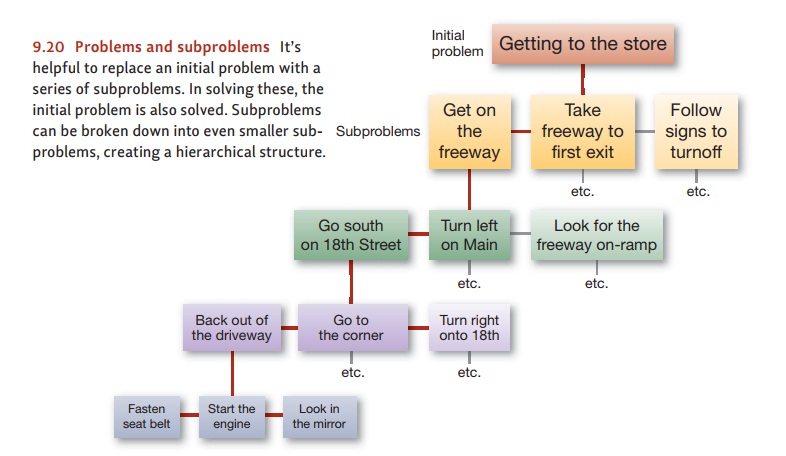 Problem solving is also guided by your broader understanding of the problem and its context.

Problem solving is also guided by your broader understanding of the problem and its context. To see this, consider an often effective problem-solving strategy called means-end analysis. In using this strategy, one asks, “What is the difference betweenmy current state and my goal?” Then, with that difference defined, one asks, “What means do I have available for reducing this difference?” Thus, for example: “I want to get to the store. What’s the difference between my current state and my goal? One of distance. How can I reduce the distance? My car. My car won’t work. What’s needed to make it work? A new battery. Where do I get a battery?” And so on (after Newell & Simon, 1972).

Understanding a problem in terms of this sort of structure has several advantages. First, the subproblems are by definition less complex than the initial problem, so they’re likely to be easier to solve than the original problem. Second, the subproblems are often quite straightforward. For example, a driver seeking to reach the store might realize that her best path is the freeway, so the larger problem (“get to the store”) can be replaced with a simpler and more familiar routine (“get on the freeway”). This rou-tine in turn is composed of still simpler subroutines—specific procedures for solving often-encountered, well-defined problems. Subroutines required for taking the free-way, for example, might include “go south on 18th Street,” “accelerate when the light turns green,” and so on. In this way, a series of modular units can be assembled into the larger-scale solution to the initial problem. 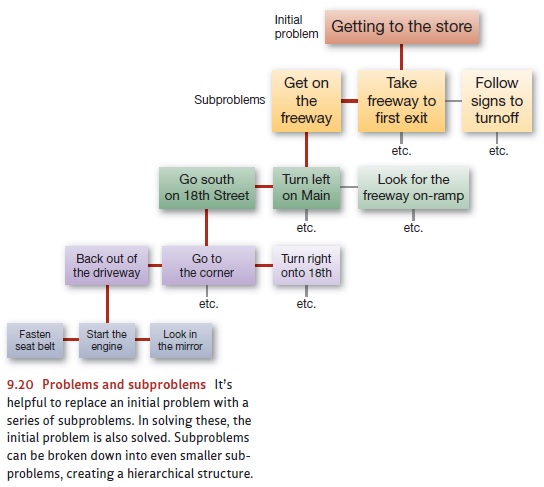