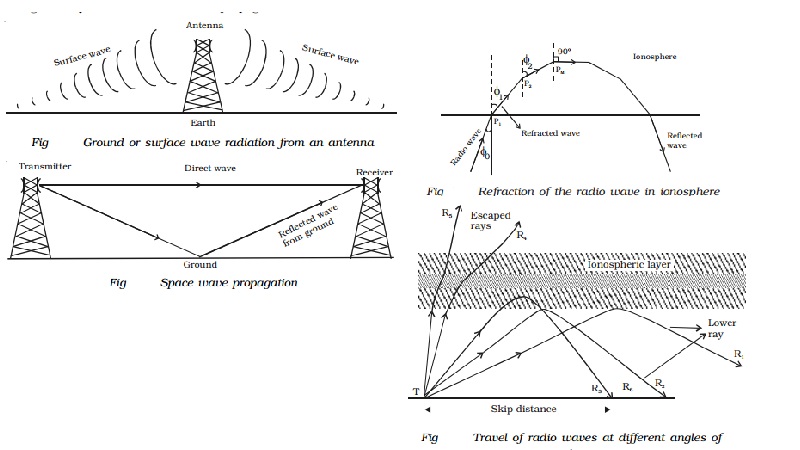 Radio wave is propagated from the transmitting to the receiving antenna mainly in three different ways depending on the frequency of the wave. They are : 1. Ground (surface) wave propagation 2. Space wave propagation 3. Sky wave (or) ionospheric propagation

The propagation of electromagnetic waves depend on the properties of the waves and the environment. Radio waves ordinarily travel in straight lines except where the earth and its atmosphere alter their path. The useful ranges of the electromagnetic spectrum for communication are summarised in Table 10.1.

Radio wave is propagated from the transmitting to the receiving antenna mainly in three different ways depending on the frequency of the wave. They are :

Ranges of electromagnetic  spectrum used for communication (NOT FOR EXAMINATION)

Radio waves propagated through the troposphere of the Earth are known as space waves. Troposphere is the portion of the Earth's atmosphere which extends upto 15 km from the surface of the Earth. Space wave usually consists of two components as shown in Fig 10.2.

1.     A component which travels straight from the transmitter to the receiver.

2.     A component which reaches the receiver after reflection from the surface of the Earth.

Space wave propagation is particularly suitable for the waves having frequency above 30 MHz.

The ionosphere is the upper portion of the atmosphere, which absorbs large quantities of radiant energy like ultra violet rays, cosmic rays etc., from the sun, becoming heated and ionised. This ionised region contains free electrons, positive and negative ions.

Radio waves in the short wave band, radiated from an antenna at large angles with ground, travel through the atmosphere and encounters the ionised region in the upper atmosphere. Under favourable circumstances, the radiowaves get bent downwards due to refraction from the different parts of the ionised region and again reach the earth at a far distant point. Such a radio wave is called the sky wave and such a propagation of radio wave is known as sky wave propagation or ionospheric propagation. Long distance radio communication is thus possible through the sky wave propagation. 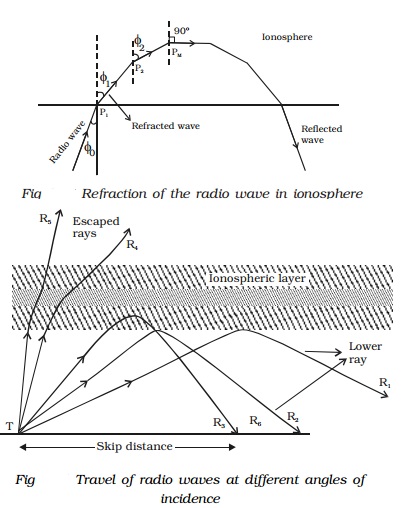 Reflection of electromagnetic waves by ionosphere

The electromagnetic waves entering into the ionosphere, are reflected by the ionosphere. In fact, the actual mechanism involved is refraction. The refractive indices of the various layers in the ionosphere do not remain constant and it varies with respect to electron density and the frequency of the incident wave. As the ionisation density increases for a wave approaching the given layer at an angle, the refractive index of the layer is reduced. Hence, the incident wave is gradually bent farther and farther away from the normal as shown in Fig 10.3 until some point. When the electron density is large, the angle of refraction becomes 90o and the wave, then travel towards the Earth.

In the skywave propagation, for a fixed frequency, the shortest distance between the point of transmission and the point of reception along the surface is known as the skip distance.