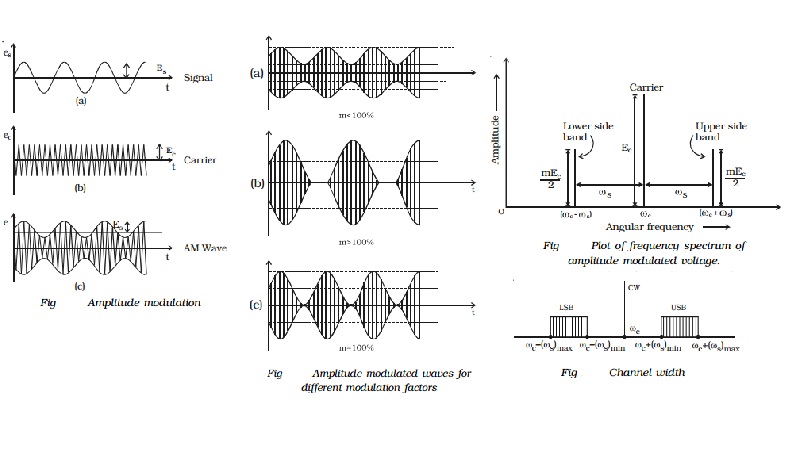 In radio broadcasting, it is necessary to send audio frequency signal (eg. music, speech etc.) from a broadcasting station over great distances to a receiver. The music, speech etc., are converted into audio signals using a microphone. The energy of a wave increases with frequency. So, the audio frequency (20 - 20000 Hz) is not having large amount of energy and cannot be sent over long distances. The radiation of electrical energy is practicable only at high frequencies e.g. above 20 kHz. The high frequency signals can be sent through thousands of kilometres with comparatively small power. 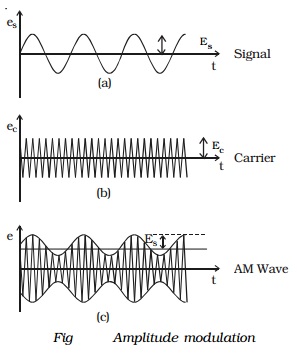 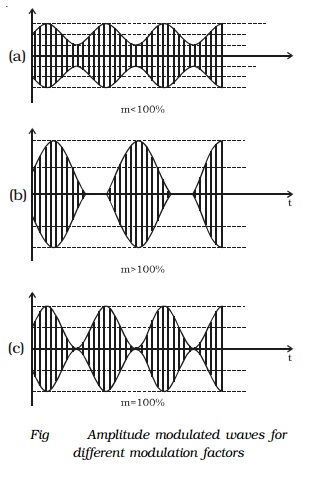 Hence, the signal wave is not exactly reproduced. For effective modulation, the degree of modulation should never exceed 100 %.

A carrier wave may be represented as,

where ec , Ec and ωc represent the instantaneous voltage, amplitude and angular frequency of the carrier wave respectively.

In amplitude modulation, the amplitude Ec of the carrier wave is varied in accordance with the intensity of the audio signal as shown in Fig . The modulating signal may be represented as,

where es, Es and ωs represent instantaneous voltage, amplitude and angular frequency of the signal respectively.

This expression shows that the modulated wave contains three components:

2.     mE2c cos (ωc + ωs)t : This component has a frequency greater than that of the carrier and is called as the Upper Side Band (USB).

3.     mE2c cos (ωc - ωs)t : This component has a frequency lesser than that of the carrier and is called as the Lower Side Band (LSB). 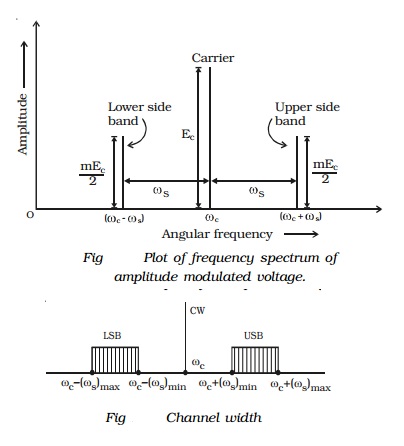 However, in a broadcasting station, the modulating signal is the human voice or music which contains waves     with a frequency range of 300 - 3000 Hz. Each of these waves has its own side bands. The upper side band (USB), in fact, contains all sum components of the signal and carrier frequency whereas lower side band (LSB) contains the difference components, as shown in Fig .

(i) Easy  transmission and reception

(ii)                 Low efficiency : In AM, useful power is available in the side bands, since they contain signals. The sideband power for an AM wave is low. Hence the efficiency of AM is low.