After reading this chapter you will be able to:

Reasons for not implementing Hello World as a first program

This chapter gives a head start into programming the embedded system. The embedded code is just like any other code but there are several restrictions. For Example: the code that runs on a computer makes certain assumptions about the available memory while in embedded system there is no scope for assumptions. The Embedded System Programmer has to know the hardware before he can even attempt to write any code.

This chapter introduces to the readers the Blinking LED program as a first program in embedded systems and explains why the hello world would be rather a difficult program.

Then an essential necessity of the code is explained: the infinite loop.

Programmers for Embedded systems must be self-reliant. The usual built in functions (i.e. standard library routines like cin and cout) may not be available to them.

Further, programmers for embedded systems have to know beforehand what hardware is involved.

Example: They should know which processor will be used, how much memory is available and what the memory offsets are. All this information will change if the underlying hardware changes.

Embedded system programming has no scope for assumption.

Example: Memory is a very limited hence precious resource in an embedded system. A large amount of memory for code as well as processing data would mean adding more memory to the circuit in the form of additional memory. A simple variable declaration like an integer (usually 2 bytes or 4 bytes) should be thought carefully before declaring it. Declaring the same variable as unsigned integer (1 byte) will suffice the purpose as well as save memory location.

Not many programmers are available for programming of embedded systems.

Every book on programming language begins with the example that prints "Hello, World!" on the output screen. The hello world is a simple program that does not involve any logic and can be implemented by a no-brainer (beginner).

However, in embedded systems, the hello world program would be a bad choice to be implemented as a first program. In case of any programming language the hello world program is executed on a general purpose computer where we have requirements like CPU, input and output devices and interaction between them taken care by the software and the operating system.

Writing a code for a device driver is not an easy job at beginner’s level. Hence hello world is a difficult program to begin with while learning to program embedded system.

The substitute for hello world program could be a program that blinks an LED. LEDs are used in almost every embedded system. Also the code used to program an LED would be very small.

To blink an LED we would require the following hardware: o LED

o  A microcontroller or microprocessor

The LED can be connected to any available port i.e P1, P2, P3, P4 on the microprocessor. Assuming the LED is connected to port 2, i.e. P2 its state is controlled by a bit in a register called the Port 2 I/O Latch Register, also known the P2LTCH.

The structure of the program would be like this:

The above piece of code is hardware independent hence can be implemented for any circuit.

otoggle(): This function is used to toggle the state of the LED.

delay(): This function is used to introduce a delay of 500 ms every time the LED is toggled

The implementation of toggle() and delay() is hardware specific.

The code for every embedded program is written in an infinite loop. This is because the embedded system is supposed to run every time it is turned on till the time its power goes off or it stops functioning.

The code for blinking LED is also enclosed in an infinite loop. The functions toggle() and delay() run infinite number of times.

An application of an embedded system has an infinite loop around its code. It’s just like the program you did to implement switch case where the program has to run continuously until the user selects to exit.

Definition: The process which converts source code to executable code is called as the build process.

An Embedded system would also use tools such as a Compiler, Linker, Locater and Debugger to perform the entire build process. These tools would be a part of a larger IDE.

A compiler which produces the executable code to be run on a different platform is called a cross-compiler; else it is called a native compiler.

Ex. Turbo C++ is a native compiler. The compiler in case of embedded systems development is a cross compiler. 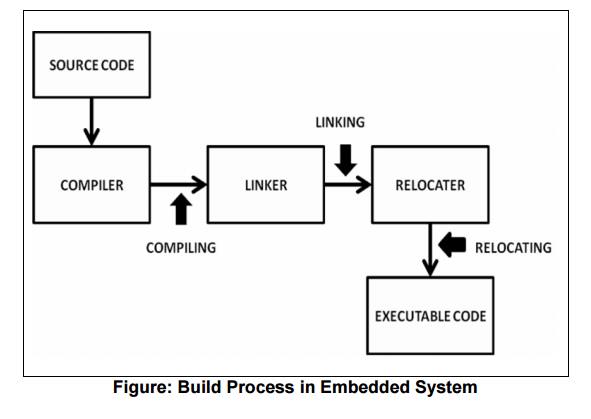 o  The process of compiling is done by the compiler.

o Compilers for embedded systems are essentially cross-compilers. For example while compiling the programmer has to select the target processor for which the code has to be generated.

o The contents of the object files depend on its format. Two commonly used formats are: 1. Common Object file format (COFF)

o  The process of linking is carried out by the linker

o The linker takes input as multiple object files and gives output as a single object file which is also called as the relocatable code.

The job of the linker is to combine these multiple object files and resolve the unresolved symbols.

The Linker does this by merging the various sections like text, data, and bss of the individual object files. The output of the linker will be a single file which contains all of the machine language code from all of the input object files that will be in the text section of this new file, and all of the initialized and uninitialized variables will reside in the new data section and bss section respectively.

The process of relocating is carried out by the relocater.

The relocater takes input as the relocatable code produced by the linker and gives output as the final executable code.

This output is a binary executable file which is called hex code.

The locator needs to be given information about the memory available on the target processor.

The locator will use this information to assign physical memory addresses to each of the code and data sections within the relocatable program code. Finally it produces an output file that contains a binary memory image that can be loaded into the target processors ROM.