Concept of downloading the embedded code

In the previous chapter we saw how the code or software to be executed on the embedded system (target board) is written on a computer. The resulting code created after subjecting it to be build process is called the binary executable image or simply hex code.

This chapter explains how the hex code is put on the target board which is referred as downloading and what are the various possible ways of debugging a code meant to run on a embedded system.

The code to be run on the target embedded system is always developed on the host computer. This code is called the binary executable image or simply hex code.

The process of putting this code in the memory chip of the target embedded system is called Downloading.

There are two ways of downloading the binary image on the embedded system:

A device programmer is a piece of hardware that works in two steps.

Certain Target embedded platforms contain a piece of hardware called ISP that have a hardware interface to both the computer as well the chip where the code is to be downloaded.

The user through the ISP’s software interface sends the binary image to the target board.

This avoids the requirement of frequently removing the microprocessor / microcontroller or ROM for downloading the code if a device programmer had to be used.

Debugging is the process of eliminating the bugs/errors in software.

The software written to run on embedded systems may contain errors and hence needs debugging.

However, the difficulty in case of embedded systems is to find out the bug/ error itself. This is because the binary image you downloaded on the target board was free of syntax errors but still if the embedded system does not function the way it was supposed to be then it can be either because of a hardware problem or a software problem. Assuming that the hardware is perfect all that remains to check is the software.

The difficult part here is that once the embedded system starts functioning there is no way for the user or programmer to know the internal state of the components on the target board.

The most primitive method of debugging is using LEDs. This is similar to using a printf or a cout statement in c/c++ programs to test if the control enters the loop or not. Similarly an LED blind or a pattern of LED blinks can be used to check if the control enters a particular piece of code.

Remote Debugger is a tool that can be commonly used for:

A Remote Debugger contains a hardware interface between the host computer and the target embedded system. 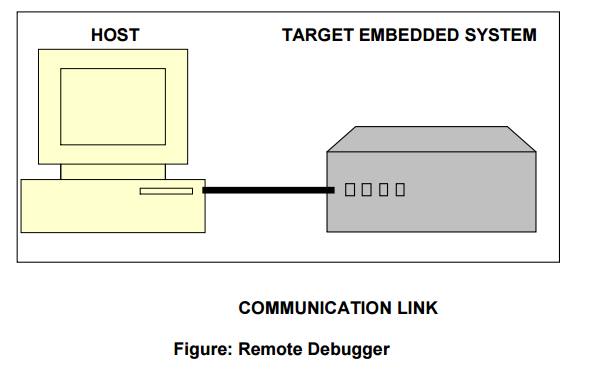 The Software interface of the remote debugger has GUI-based main window and several smaller windows for the source code, register contents and other information about the executing program.

It contains two pieces of software :

It runs on the host computer.

It provides the human interface.

Backend remote debugger runs on the target processor.It communicates with the frontend over a communications link of some sort.

It provides for low-level control of the target processorand is usually called the debug monitor.

Debug monitoris a piece of software that has beendesigned specifically for use as a debugging tool for processors and chips.

It is automatically started whenever the processor is reset.

It monitors the communication link to the host computer and responds to requests from the remote debugger running there.

One such debugger is the GNU.

It was originally designed for native debugger.

Communication between the GDB frontend and debug monitor is byte-oriented and designed for transmission over a serial connection.

A Remote debugger is helpful for monitoring and controlling the state of embedded software prior to downloading it only.

An Emulator allows you to examine the state of the processor on which that program is actually running. It is itself an embedded system, with its own copy of the target processor, RAM, ROM, and its own embedded software

An Emulator takes the place of-or emulates-the processor on the target board.

Emulator uses a remote debugger for its human interface.

Emulator supports such powerful debugging features such as hardware breakpoints and real-time tracing. Hardware breakpoints allow you to stop execution in response to a wide variety of events. These events include instruction fetches, memory and I/O reads and writes and interrupts. Real Time tracing allows you to see the exact order in which events occurred, so it can help you answer questions related to specific errors.

It is a device that emulates a read only memory device like ICE (in-circuit emulator).

It connects to the target embedded system and communicates with the host.

When a target connection is via a ROM socket to embedded system it looks like any other read only memory. But when it is to the remote debugger it looks like a debug monitor.

There is no need to port the debug monitor code to particular target hardware.

The ROM emulator is a true replacement for the original ROM, so none of the target’s memory is used up by the debug monitor code

A simulator is a completely host-based program that simulates the functionality and instructions set of the target processor.

Advantage: A Simulator can be quite valuable in the earlier stage of a project when there has not yet been any actual hardware implementation for the programmers to experiment with.

Disadvantage: One of the disadvantages of simulator is that it only simulates the processors.

It is a piece of laboratory equipment that is designed especially for troubleshooting digital hardware.

It can have multiple inputs (up to 100 even), each capable of detecting whether the electrical signal it is attached to is currently at logic level 1 or 0

An oscilloscope is another pieces of laboratory equipment of hardware debugging. But this one is used to examine any electrical signal, analog or digital, on any piece of hardware

An oscilloscope is another pieces of laboratory equipment of hardware debugging. But this one is used to examine any electrical signal, analog or digital, on any piece of hardware

Oscilloscope are sometimes useful for quickly observing the voltage on the particular pin or, in the absence of a logic analyzer, for something ,more complex