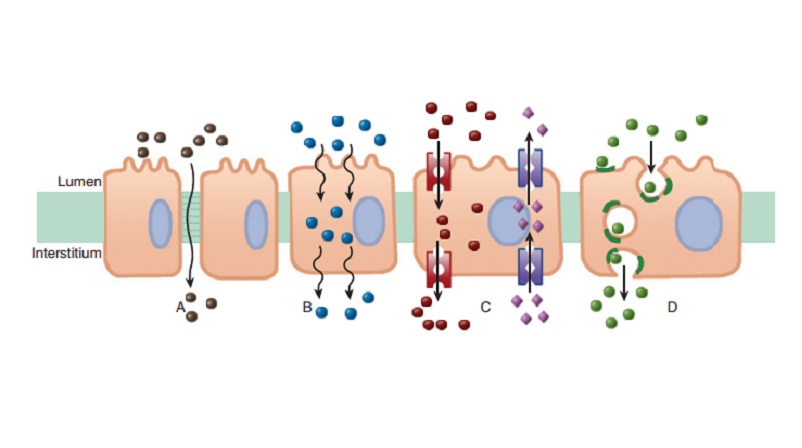 In practical therapeutics, a drug should be able to reach its intended site of action after administration by some convenient route.

In practical therapeutics, a drug should be able to reach its intended site of action after administration by some convenient route. In many cases, the active drug molecule is sufficiently lipid-soluble and stable to be given as such. In some cases, however, an inactive precursor chemical that is readily absorbed and distrib-uted must be administered and then converted to the active drug by biologic processes—inside the body. Such a precursor chemical is called a prodrug.In only a few situations is it possible to apply a drug directly to its target tissue, eg, by topical application of an anti-inflammatory agent to inflamed skin or mucous membrane. Most often, a drug is administered into one body compartment, eg, the gut, and must move to its site of action in another compartment, eg, the brain in the case of an antiseizure medication. This requires that the drug be absorbed into the blood from its site of administration and distributed to its site of action, permeating through the various barriers that separate these compartments.

Drug permeation proceeds by several mechanisms. Passive diffu-sion in an aqueous or lipid medium is common, but active pro-cesses play a role in the movement of many drugs, especially those whose molecules are too large to diffuse readily (Figure 1–5).

1.     Aqueous diffusion—Aqueous diffusion occurs within thelarger aqueous compartments of the body (interstitial space, cyto-sol, etc) and across epithelial membrane tight junctions and the endothelial lining of blood vessels through aqueous pores that—in some tissues—permit the passage of molecules as large as MW 20,000–30,000.* See Figure 1–5A.

Aqueous diffusion of drug molecules is usually driven by the concentration gradient of the permeating drug, a downhill move-ment described by Fick’s law . Drug molecules that are bound to large plasma proteins (eg, albumin) do not permeate most vascular aqueous pores. If the drug is charged, its flux is also influenced by electrical fields (eg, the membrane potential and—in parts of the nephron—the transtubular potential).

2.     Lipid diffusion—Lipid diffusion is the most important limit-ing factor for drug permeation because of the large  number of lipid barriers that separate the compartments of the body. Because these lipid barriers separate aqueous  compartments, thelipid:aqueous partition coefficient of a drug determines howreadily the molecule moves between aqueous and lipid media. In the case of weak acids and weak bases (which gain or lose electrical charge-bearing protons, depending on the pH), the ability to move from aqueous to lipid or vice versa varies with the pH of the medium, because charged molecules attract water molecules. The ratio of lipid-soluble form to water-soluble form for a weak acid or weak base is expressed by the Henderson-Hasselbalch equation (described in the following text). See Figure 1–5B.

3. Special carriers—Special carrier molecules exist for manysubstances that are important for cell function and too large or too insoluble in lipid to diffuse passively through membranes, eg, peptides, amino acids, and glucose. These carriers bring about movement by active transport or facilitated diffusion and, unlike passive diffusion, are selective, saturable, and inhibitable. Because many drugs are or resemble such naturally occurring peptides, amino acids, or sugars, they can use these carriers to cross mem-branes. See Figure 1–5C.

Many cells also contain less selective membrane carriers that are specialized for expelling foreign molecules. One large family of such transporters binds adenosine triphosphate (ATP) and is called the ABC (ATP-binding cassette) family. This family includes the P-glycoprotein or multidrug resistance type 1 (MDR1) trans-porter found in the brain, testes, and other tissues, and in somedrug-resistant neoplastic cells, Table 1–2. Similar transport molecules from the ABC family, the multidrug resistance-associated pro-tein (MRP) transporters, play important roles in the excretion ofsome drugs or their metabolites into urine and bile and in the resistance of some tumors to chemotherapeutic drugs. Several other transporter families have been identified that do not bind ATP but use ion gradients to drive transport. Some of these (the solute car-rier [SLC] family) are particularly important in the uptake of neurotransmitters across nerve-ending membranes. The latter car-riers are discussed in more detail later.

4. Endocytosis and exocytosis—A few substances are so large orimpermeant that they can enter cells only by endocytosis, the pro-cess by which the substance is bound at a cell-surface receptor,

engulfed by the cell membrane, and carried into the cell by pinching off of the newly formed vesicle inside the membrane. The substance can then be released inside the cytosol by breakdown of the vesicle membrane, Figure 1–5D. This process is responsible for the trans-port of vitamin B12, complexed with a binding protein (intrinsic factor) across the wall of the gut into the blood. Similarly, iron is transported into hemoglobin-synthesizing red blood cell precursors in association with the protein transferrin. Specific receptors for the transport proteins must be present for this process to work.

The reverse process (exocytosis) is responsible for the secretion of many substances from cells. For example, many neurotransmit-ter substances are stored in membrane-bound vesicles in nerve endings to protect them from metabolic destruction in the cyto-plasm. Appropriate activation of the nerve ending causes fusion of the storage vesicle with the cell membrane and expulsion of its contents into the extracellular space .

B. Fick’s Law of Diffusion

The passive flux of molecules down a concentration gradient is given by Fick’s law:

The electrostatic charge of an ionized molecule attracts water dipoles and results in a polar, relatively water-soluble and lipid-in-soluble complex. Because lipid diffusion depends on relatively high lipid solubility, ionization of drugs may markedly reduce their abil-ity to permeate membranes. A very large percentage of the drugs in use are weak acids or weak bases (Table 1–3). For drugs, a weak acid is best defined as a neutral molecule that can reversibly dis-sociate into an anion (a negatively charged molecule) and a proton (a hydrogen ion). For example, aspirin dissociates as follows:

A drug that is a weak base can be defined as a neutral molecule that can form a cation (a positively charged molecule) by combin-ing with a proton. For example, pyrimethamine, an antimalarial drug, undergoes the following association-dissociation process:

Note that the protonated form of a weak acid is the neutral, more lipid-soluble form, whereas the unprotonated form of a weak base is the neutral form. The law of mass action requires that these reactions move to the left in an acid environment (low pH, excess protons available) and to the right in an alkaline environ-ment. The Henderson-Hasselbalch equation relates the ratio of protonated to unprotonated weak acid or weak base to the mole-cule’s pKa and the pH of the medium as follows: 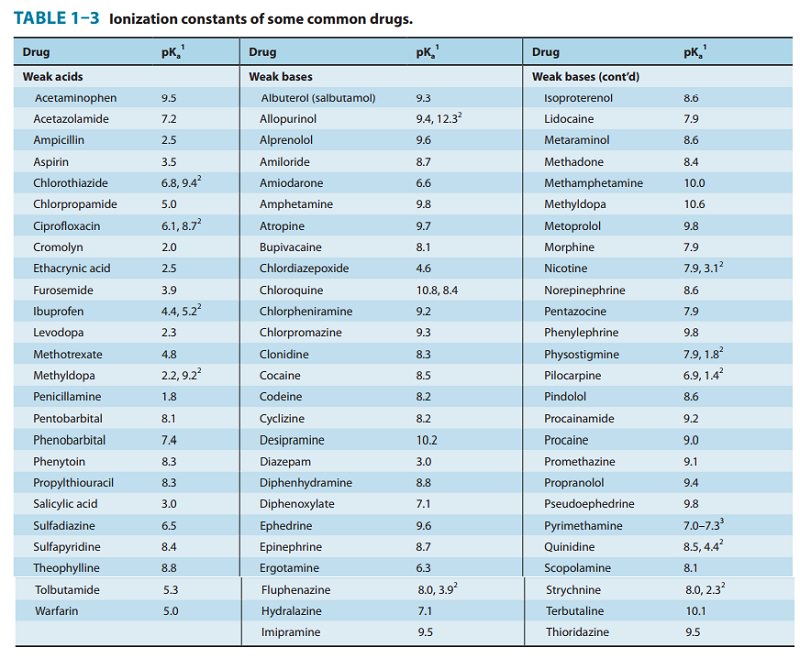 Application of this principle is made in the manipulation of drug excretion by the kidney. Almost all drugs are filtered at the glomerulus. If a drug is in a lipid-soluble form during its passage down the renal tubule, a significant fraction will be reabsorbed by simple passive diffusion. If the goal is to accelerate excretion of the drug (eg, in a case of drug overdose), it is important to pre-vent its reabsorption from the tubule. This can often be accom-plished by adjusting urine pH to make certain that most of the drug is in the ionized state, as shown in Figure 1–6. As a result of this partitioning effect, the drug is “trapped” in the urine. Thus, weak acids are usually excreted faster in alkaline urine; weak bases are usually excreted faster in acidic urine. Other body fluids in which pH differences from blood pH may cause trapping or reabsorption are the contents of the stomach and small intestine; 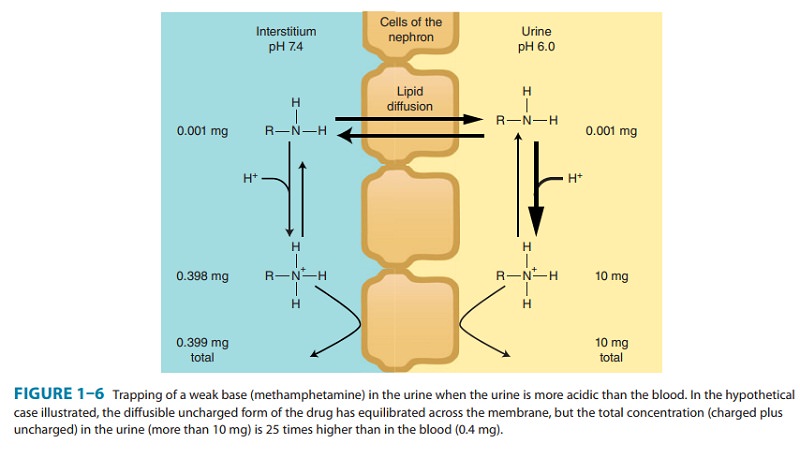 As suggested by Table 1–3, a large number of drugs are weak bases. Most of these bases are amine-containing molecules. The nitrogen of a neutral amine has three atoms associated with it plus a pair of unshared electrons (see the display that follows). The three atoms may consist of one carbon (designated “R”) and two hydrogens (a primary amine), two carbons and one hydrogen (a secondary amine), or three carbon atoms (a tertiary amine).Each of these three forms may reversibly bind a proton with the unshared electrons. Some drugs have a fourth carbon-nitrogen bond; these are quaternary amines. However, the quaternary amine is permanently charged and has no unshared electrons with which to reversibly bind a proton. Therefore, primary, secondary, and tertiary amines may undergo reversible protonation and vary their lipid solubility with pH, but quaternary amines are always in the poorly lipid-soluble charged form.