Because transmission involves different mechanisms in differ-ent segments of the ANS, some drugs produce highly specific effects, whereas others are much less selective in their actions.

Because transmission involves different mechanisms in differ-ent segments of the ANS, some drugs produce highly specific effects, whereas others are much less selective in their actions. A summary of the steps in transmission of impulses, from the CNS to the autonomic effector cells, is presented in Table 6–5. Drugs that block action potential propagation (local anesthetics and some natural toxins) are very nonselective in their action, since they act on a process that is common to all neurons. On the other hand, drugs that act on the biochemical processes involved in transmitter synthesis and storage are more selective, since the biochemistry of each transmitter differs, eg, norepi-nephrine synthesis is very different from acetylcholine synthesis. Activation or blockade of effector cell receptors offers maximum flexibility and selectivity of effect attainable with currently available drugs: adrenoceptors are easily distinguished from cholinoceptors.

Furthermore, individual receptor subgroups can often be selectively activated or blocked within each major type. Some examples are given in the Box: Pharmacology of the

Eye. Even greater selectivity may be attainable in the future using drugs that target post-traditional receptor processes, eg, receptors for second messengers. 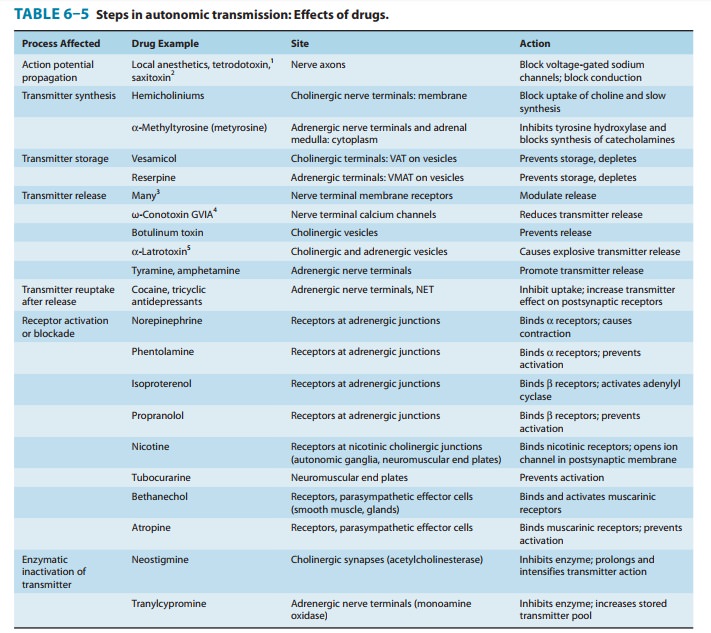 Pharmacology of the Eye

The eye is a good example of an organ with multiple autonomic functions, controlled by several autonomic receptors. As shown in Figure 6–9, the anterior chamber is the site of several autonomic effector tissues. These tissues include three muscles (pupillary dila-tor and constrictor muscles in the iris and the ciliary muscle) and the secretory epithelium of the ciliary body.Parasympathetic nerve activity and muscarinic cholinomimet-ics mediate contraction of the circular pupillary constrictor muscle and of the ciliary muscle. Contraction of the pupillary constrictor muscle causes miosis, a reduction in pupil size. Miosis is usually present in patients exposed to large systemic or small topical doses of cholinomimetics, especially organophosphate cholinest-erase inhibitors. Ciliary muscle contraction causes accommoda-tion of focus for near vision. Marked contraction of the ciliary muscle, which often occurs with cholinesterase inhibitor intoxication, is called cyclospasm. Ciliary muscle contraction also puts tension on the trabecular meshwork, opening its pores and facilitating outflow of the aqueous humor into the canal of Schlemm. Increased outflow reduces intraocular pressure, a very useful result in patients with glaucoma. All of these effects are prevented or reversed by muscarinic blocking drugs such as atropine.

Alpha adrenoceptors mediate contraction of the radially ori-ented pupillary dilator muscle fibers in the iris and result in mydriasis. This occurs during sympathetic discharge and when α-agonist drugs such as phenylephrine are placed in the conjunc-tival sac. Beta adrenoceptors on the ciliary epithelium facilitate the secretion of aqueous humor. Blocking these receptors (with β-blocking drugs) reduces the secretory activity and reduces intraocular pressure, providing another therapy for glaucoma. 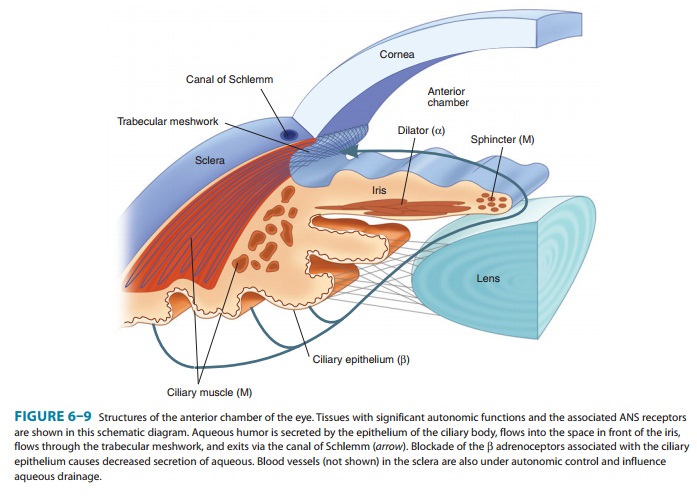