Anatomy of the Autonomic Nervous System 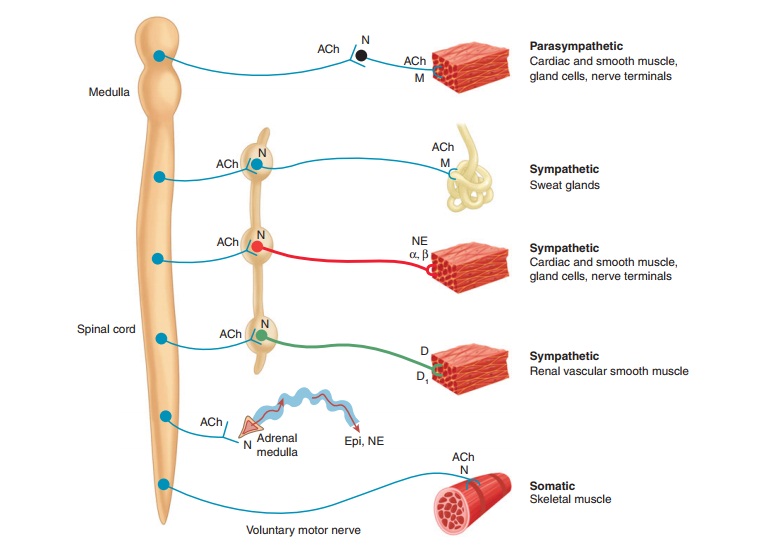 The ANS lends itself to division on anatomic grounds into two major portions: the sympathetic (thoracolumbar) division and the parasympathetic (craniosacral) division (Figure 6–1).

ANATOMY OF THE AUTONOMIC NERVOUS SYSTEM

The ANS lends itself to division on anatomic grounds into two major portions: the sympathetic (thoracolumbar) division and the parasympathetic (craniosacral) division (Figure 6–1). Neurons inboth divisions originate in nuclei within the CNS and give rise to preganglionic efferent fibers that exit from the brain stem or spinal cord and terminate in motor ganglia. The sympathetic preganglionicfibers leave the CNS through the thoracic and lumbar spinal nerves. The parasympathetic preganglionic fibers leave the CNS through the cranial nerves (especially the third, seventh, ninth, and tenth) and the third and fourth sacral spinal nerve roots. 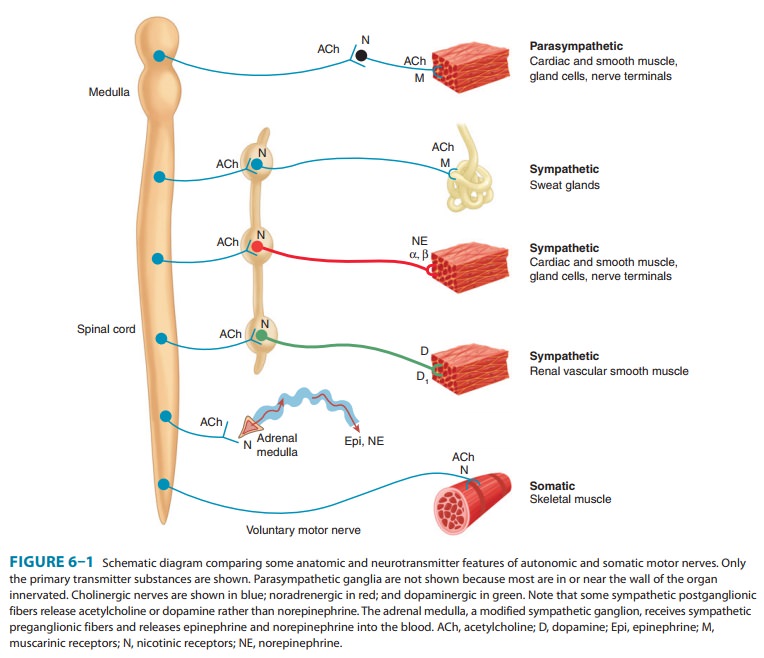 In addition to these clearly defined peripheral motor portions of the ANS, large numbers of afferent fibers run from the periph-ery to integrating centers, including the enteric plexuses in the gut, the autonomic ganglia, and the CNS. Many of the sensory pathways that end in the CNS terminate in the integrating centers of the hypothalamus and medulla and evoke reflex motor activity that is carried to the effector cells by the efferent fibers described previously. There is increasing evidence that some of these sensory fibers also have peripheral motor functions. 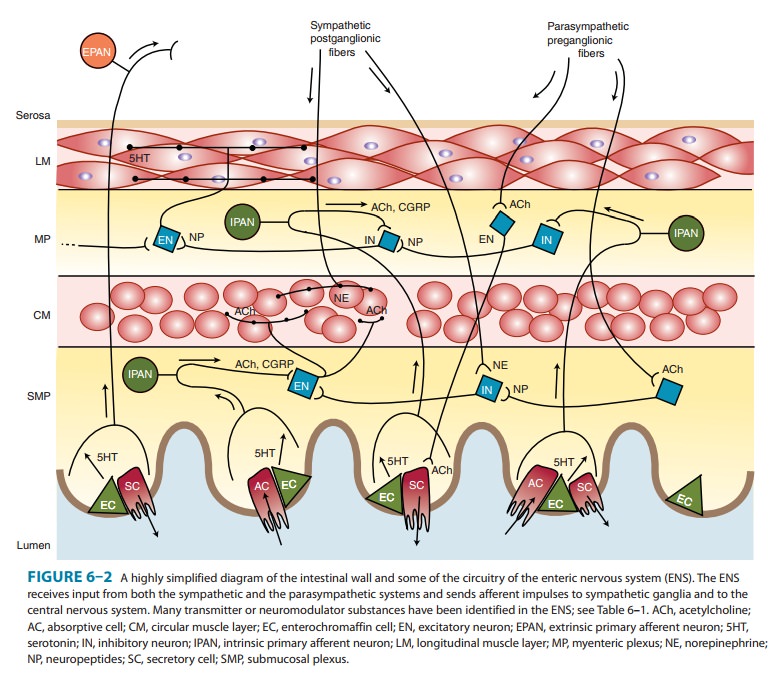 The enteric nervous system (ENS) is a large and highly orga-nized collection of neurons located in the walls of the gastrointes-tinal (GI) system (Figure 6–2). It is sometimes considered a third division of the ANS. It is found in the wall of the GI tract from the esophagus to the distal colon and is involved in both motor and secretory activities of the gut. It is particularly critical in the motor activity of the colon. The ENS includes the myenteric plexus (the plexus of Auerbach) and the submucous plexus (the plexus of Meissner). These neuronal networks receive preganglionic fibers from the parasympathetic system and postganglionic sympathetic axons. They also receive sensory input from within the wall of the gut. Fibers from the neuronal cell bodies in these plexuses travel forward, backward, and in a circular direction to the smooth muscle of the gut to control motility and to secretory cells in the mucosa. Sensory fibers transmit chemical and mechanical informa-tion from the mucosa and from stretch receptors to motor neurons in the plexuses and to postganglionic neurons in the sympathetic ganglia. The parasympathetic and sympathetic fibers that synapse on enteric plexus neurons appear to play a modulatory role, as indicated by the observation that deprivation of input from both ANS divisions does not abolish GI activity. In fact, selective dener-vation may result in greatly enhanced motor activity.

The ENS functions in a semiautonomous manner, utilizing input from the motor outflow of the ANS for modulation of GI activity and sending sensory information back to the CNS. The ENS also provides the necessary synchronization of impulses that, for example, ensures forward, not backward, propulsion of gut contents and relaxation of sphincters when the gut wall contracts.

The anatomy of autonomic synapses and junctions determines the localization of transmitter effects around nerve endings. Classic synapses such as the mammalian neuromuscular junction and most neuron-neuron synapses are relatively “tight” in that the nerve terminates in small boutons very close to the tissue inner-vated, so that the diffusion path from nerve terminal to postsyn-aptic receptors is very short. The effects are thus relatively rapid and localized. In contrast, junctions between autonomic neuron terminals and effector cells (smooth muscle, cardiac muscle, glands) differ from classic synapses in that transmitter is often released from a chain of varicosities in the postganglionic nerve fiber in the region of the smooth muscle cells rather than from boutons, and autonomic junctional clefts are wider than somatic synaptic clefts. Effects are thus slower in onset and discharge of a single motor fiber often activates or inhibits many effector cells.