The primary acetylcholine receptor subtypes were named after the alkaloids originally used in their identification:

Historically, structure-activity analyses, with careful comparisons of the potency of series of autonomic agonist and antagonist analogs, led to the definition of different autonomic receptor subtypes, including muscarinic and nicotinic cholinoceptors, and α, β, and dopamine adrenoceptors (Table 6–2). Subsequently, binding of isotope-labeled ligands permitted the purification and characteriza-tion of several of the receptor molecules. Molecular biology now provides techniques for the discovery and expression of genes that code for related receptors within these groups . 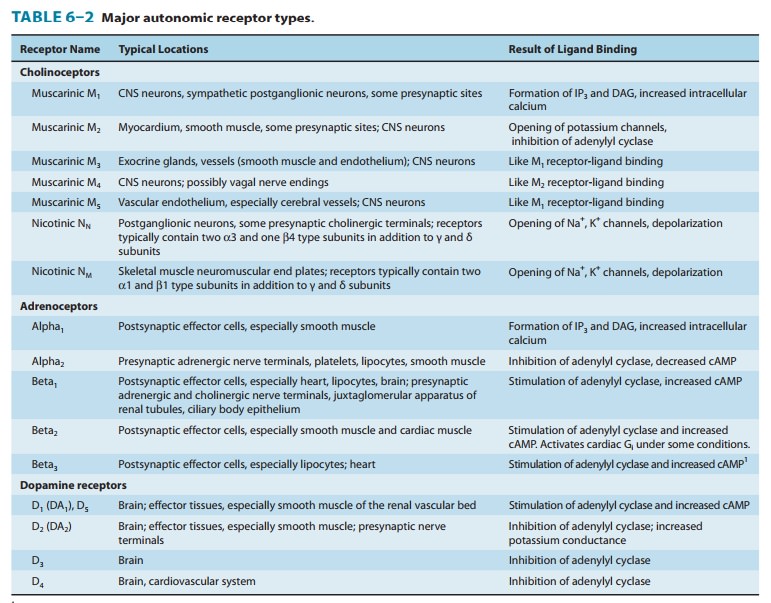 The primary acetylcholine receptor subtypes were named after the alkaloids originally used in their identification: muscarine and nicotine, thus muscarinic and nicotinic receptors. In the case of receptors associated with noradrenergic nerves, the use of the names of the agonists (noradrenaline, phenylephrine, isoprotere-nol, and others) was not practicable. Therefore, the term adreno-ceptor is widely used to describe receptors that respond tocatecholamines such as norepinephrine. By analogy, the term cholinoceptor denotes receptors (both muscarinic and nicotinic)that respond to acetylcholine. In North America, receptors were colloquially named after the nerves that usually innervate them; thus, adrenergic (or noradrenergic) receptors and cholinergicreceptors. The general class of adrenoceptors can be further sub-divided into `-adrenoceptor,a-adrenoceptor, and dopamine-receptor types on the basis of both agonist and antagonistselectivity and on genomic grounds. Development of more selec-tive blocking drugs has led to the naming of subclasses within these major types; for example, within the α-adrenoceptor class, α1and α2receptors differ in both agonist and antagonist selectivity.