Cellular Organization of the Brain

CELLULAR ORGANIZATION OF THE BRAIN

Hierarchical systems include all the pathways directly involved in sensory perception and motor control. The pathways are generally clearly delineated, being composed of large myelinated fibers that can often conduct action potentials at a rate of more than 50 m/s. The information is typically phasic and occurs in bursts of action potentials. In sensory systems, the information is processed sequentially by successive integrations at each relay nucleus on its way to the cortex. A lesion at any link incapacitates the system. Within each nucleus and in the cortex, there are two types of cells: relay or projection neurons and local circuit neurons (Figure 21–6A). The projection neurons that form the intercon-necting pathways transmit signals over long distances. The cell bodies are relatively large, and their axons emit collaterals that arborize extensively in the vicinity of the neuron. These neurons are excitatory, and their synaptic influences, which involve iono-tropic receptors, are very short-lived. 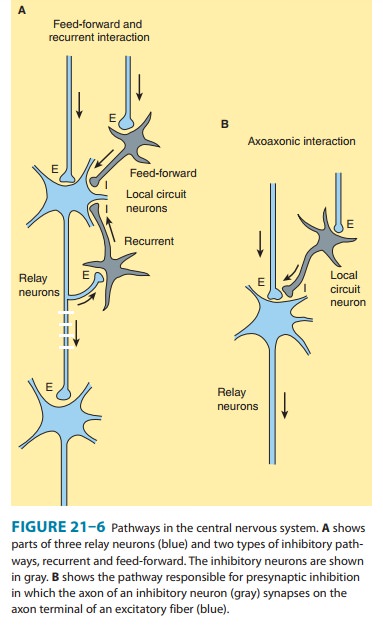 The excitatory transmitter released from these cells is, in most instances, glutamate. Local circuit neurons are typically smaller than projection neurons, and their axons arborize in the immedi-ate vicinity of the cell body. Most of these neurons are inhibitory, and they release either GABA or glycine. They synapse primarily on the cell body of the projection neurons but can also synapse on the dendrites of projection neurons as well as with each other. Two common types of pathways for these neurons (Figure 21–6A) include recurrent feedback pathways and feed-forward pathways. A special class of local circuit neurons in the spinal cord forms axoaxonic synapses on the terminals of sensory axons (Figure 21–6B). In some sensory pathways such as the retina and olfactory bulb, local circuit neurons may actually lack an axon and release neurotransmitter from dendritic synapses in a graded fashion in the absence of action potentials.

Although there is a great variety of synaptic connections in these hierarchical systems, the fact that a limited number of trans-mitters are used by these neurons indicates that any major phar-macologic manipulation of this system will have a profound effect on the overall excitability of the CNS. For instance, selectively blocking GABAA receptors with a drug such as picrotoxin results in generalized convulsions. Thus, although the mechanism of action of picrotoxin is specific in blocking the effects of GABA, the overall functional effect appears to be quite nonspecific, because GABA-mediated synaptic inhibition is so widely utilized in the brain.

Neuronal systems that contain one of the monoamines— norepinephrine, dopamine, or 5-hydroxytryptamine (serotonin)— provide examples in this category. Certain other pathways emanating from the reticular formation and possibly some peptide-containing pathways also fall into this category. These systems differ in fundamental ways from the hierarchical systems, and the noradrenergic systems serve to illustrate the differences.

Noradrenergic cell bodies are found primarily in a compact cell group called the locus caeruleus located in the caudal pon-tine central gray matter. The number of neurons in this cell group is small, approximately 1500 on each side of the brain in the rat.

Because these axons are fine and unmyelinated, they conduct very slowly, at about 0.5 m/s. The axons branch repeatedly and are extraordinarily divergent. Branches from the same neuron can innervate several functionally different parts of the CNS. In the neocortex, these fibers have a tangential organization and there-fore can monosynaptically influence large areas of cortex. The pattern of innervation by noradrenergic fibers in the cortex and nuclei of the hierarchical systems is diffuse, and these fibers form a very small percentage of the total number in the area. In addi-tion, the axons are studded with periodic enlargements called varicosities, which contain large numbers of vesicles. In some instances, these varicosities do not form synaptic contacts, sug-gesting that norepinephrine may be released in a rather diffuse manner, as occurs with the noradrenergic autonomic innervation of smooth muscle. This indicates that the cellular targets of these systems are determined largely by the location of the receptors rather than by the location of the release sites. Finally, most neu-rotransmitters utilized by diffuse neuronal systems, including norepinephrine, act—perhaps exclusively—on metabotropic receptors and therefore initiate long-lasting synaptic effects. Based on these observations, it is clear that the monoamine sys-tems cannot be conveying topographically specific types of infor-mation; rather, vast areas of the CNS must be affected simultaneously and in a rather uniform way. It is not surprising, then, that these systems have been implicated in such global func-tions as sleeping and waking, attention, appetite, and emotional states.