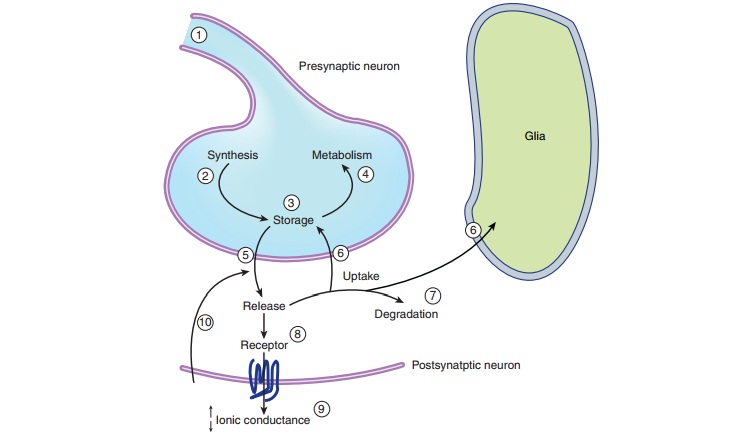 Virtually all the drugs that act in the CNS produce their effects by modifying some step in chemical synaptic transmission.

Virtually all the drugs that act in the CNS produce their effects by modifying some step in chemical synaptic transmission. Figure 21–5 illustrates some of the steps that can be altered. These transmitter-dependent actions can be divided into presynaptic and postsynaptic categories.

Drugs acting on the synthesis, storage, metabolism, and release of neurotransmitters fall into the presynaptic category. Synaptic transmission can be depressed by blockade of transmit-ter synthesis or storage. For example, reserpine depletes monoam-ine synapses of transmitters by interfering with intracellular storage. Blockade of transmitter catabolism inside the nerve ter-minal can increase transmitter concentrations and has been reported to increase the amount of transmitter released per impulse. Drugs can also alter the release of transmitters. The stimulant amphetamine induces the release of catecholamines from adrenergic synapses. Capsaicin causes the release of the peptide substance P from sensory neu-rons, and tetanus toxin blocks the release of transmitters. After a transmitter has been released into the synaptic cleft, its action is terminated either by uptake or by degradation. For most neu-rotransmitters, there are uptake mechanisms into the synaptic terminal and also into surrounding neuroglia. Cocaine, for example, blocks the uptake of catecholamines at adrenergic syn-apses and thus potentiates the action of these amines. However, acetylcholine is inactivated by enzymatic degradation, not reuptake. Anticholinesterases block the degradation of acetylcho-line and thereby prolong its action. No uptake mechanism has been found for any of the numerous CNS peptides, and it has yet to be demonstrated whether specific enzymatic degradation ter-minates the action of peptide transmitters. 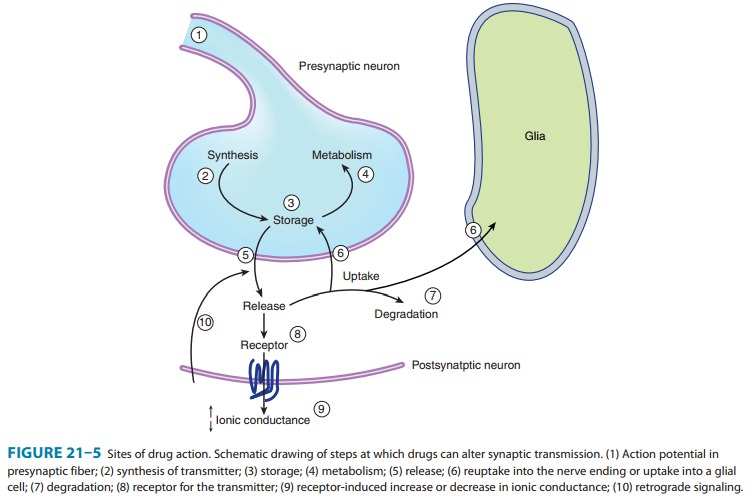 In the postsynaptic region, the transmitter receptor provides the primary site of drug action. Drugs can act either as neu-rotransmitter agonists, such as the opioids, which mimic the action of enkephalin, or they can block receptor function. Receptor antagonism is a common mechanism of action for CNS drugs. An example is strychnine’s blockade of the receptor for the inhibitory transmitter glycine. This block, which underlies strychnine’s convulsant action, illustrates how the blockade of inhibitory processes results in excitation. Drugs can also act directly on the ion channel of ionotropic receptors. For example, barbiturates can enter and block the channel of many excitatory ionotropic receptors. In the case of metabotropic receptors, drugs can act at any of the steps downstream of the receptor. Perhaps the best example is provided by the methylxanthines, which can modify neurotransmitter responses mediated through the second-messenger cAMP. At high concentrations, the methylxanthines elevate the level of cAMP by blocking its metabolism and thereby prolong its action.

The traditional view of the synapse is that it functions like a valve, transmitting information in one direction. However, it is now clear that the synapse can generate signals that feed back onto the presynaptic terminal to modify transmitter release. Endocannabinoids are the best documented example of such retrograde signaling. Postsynaptic activity leads to the synthesis andrelease of endocannabinoids, which then bind to receptors on the presynaptic terminal. Although the gas nitric oxide (NO) has long been proposed as a retrograde messenger, its physiologic role in the CNS is still not well understood.

The selectivity of CNS drug action is based almost entirely on the fact that different transmitters are used by different groups of neurons.

Furthermore, these transmitters are often segregated into neuronal systems that subserve broadly different CNS functions. Without such segregation, it would be impossible to selectively modify CNS function, even if one had a drug that operated on a single neurotransmitter system. That such segregation does occur has provided neuroscientists with a powerful pharmacologic approach for analyzing CNS function and treating pathologic conditions.