The communication between neurons in the CNS occurs through chemical synapses in the majority of cases.

The communication between neurons in the CNS occurs through chemical synapses in the majority of cases. (A few instances of electrical coupling between neurons have been documented, and such coupling may play a role in synchronizing neuronal dis-charge. However, it is unlikely that these electrical synapses are an important site of drug action.) The events involved in synaptic transmission can be summarized as follows.

An action potential in the presynaptic fiber propagates into the synaptic terminal and activates voltage-sensitive calcium channels in the membrane of the terminal (see Figure 6–3). The calcium chan-nels responsible for the release of transmitter are generally resistant to the calcium channel-blocking agents discussed earily (verapamil, etc) but are sensitive to blockade by certain marine toxins and metal ions (see Tables 21–1 and 12–4). Calcium flows into the terminal, and the increase in intraterminal calcium concentration promotes the fusion of synaptic vesicles with the presynaptic mem-brane. The transmitter contained in the vesicles is released into the synaptic cleft and diffuses to the receptors on the postsynaptic mem-brane. Binding of the transmitter to its receptor causes a brief change in membrane conductance (permeability to ions) of the postsynaptic cell. The time delay from the arrival of the presynaptic action poten-tial to the onset of the postsynaptic response is approximately 0.5 ms. Most of this delay is consumed by the release process, par-ticularly the time required for calcium channels to open. 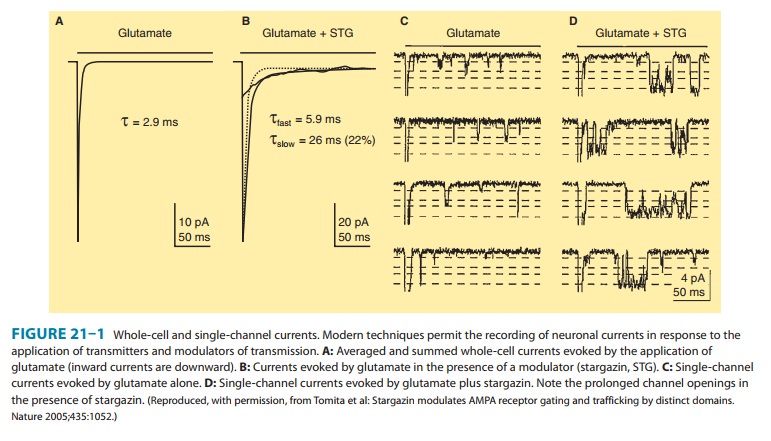 The first systematic analysis of synaptic potentials in the CNS was in the early 1950s by Eccles and associates, who recorded intra-cellularly from spinal motor neurons. When a microelectrode enters a cell, there is a sudden change in the potential recorded by the electrode, which is typically about –70 mV (Figure 21–3). This is the resting membrane potential of the neuron. Two types of pathways— excitatory and inhibitory—impinge on the motor neuron. 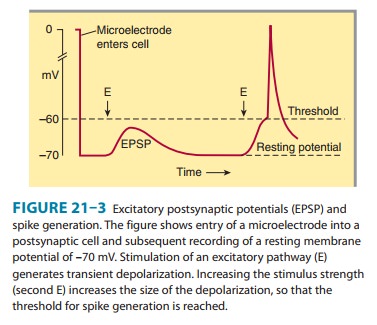 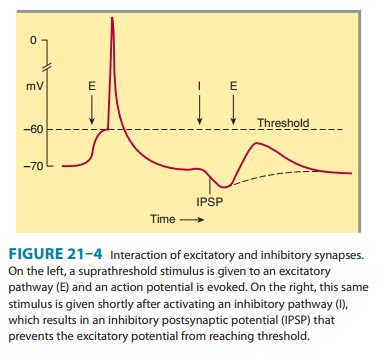