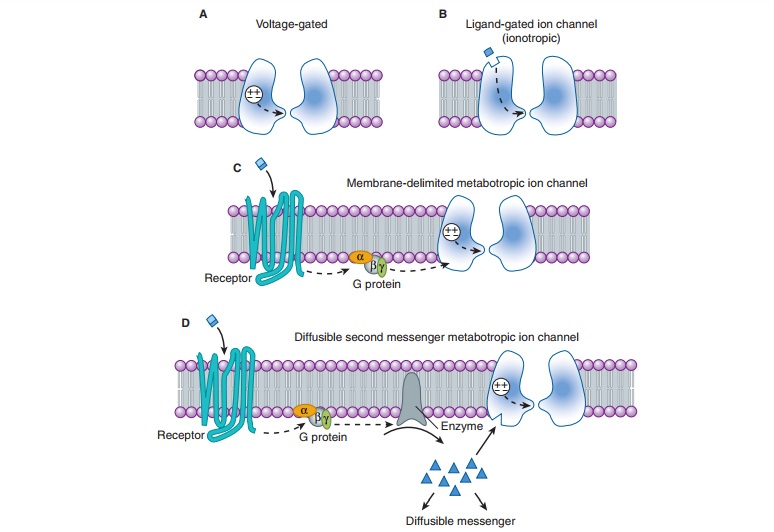 The membranes of nerve cells contain two types of channels defined on the basis of the mechanisms controlling their gating (opening and closing): voltage-gated and ligand-gated channels (Figure 21–2A and B).

The membranes of nerve cells contain two types of channels defined on the basis of the mechanisms controlling their gating (opening and closing): voltage-gated and ligand-gated channels (Figure 21–2A and B). Voltage-gated channels respond to changes in the membrane potential of the cell. The voltage-gated sodium channel described for the heart is an example of the first type of channel. In nerve cells, these channels are concen-trated on the initial segment and the axon and are responsible for the fast action potential, which transmits the signal from cell body to nerve terminal. There are many types of voltage-sensitive calcium and potassium channels on the cell body, dendrites, and initial segment, which act on a much slower time scale and modu-late the rate at which the neuron discharges. For example, some types of potassium channels opened by depolarization of the cell result in slowing of further depolarization and act as a brake to limit further action potential discharge. 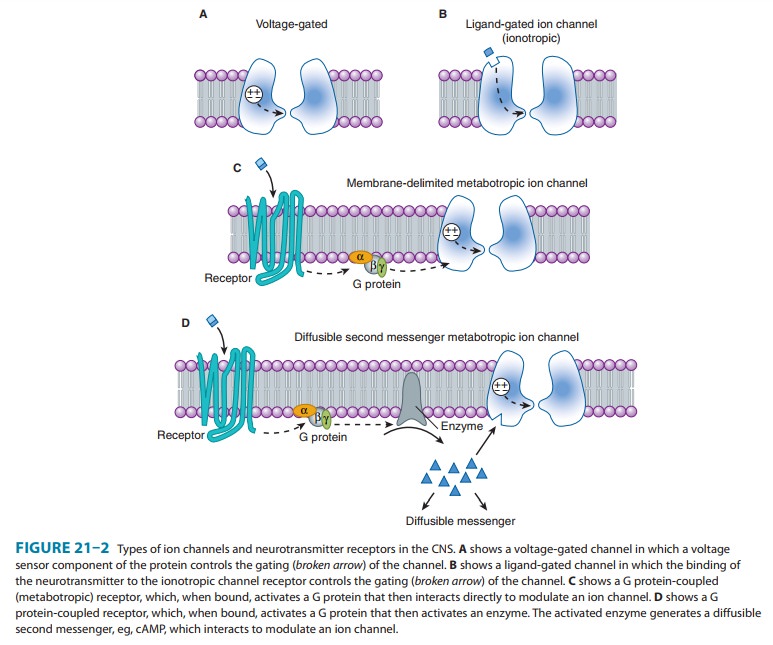 Neurotransmitters exert their effects on neurons by binding to two distinct classes of receptor. The first class is referred to as ligand-gated channels, or ionotropic receptors. The receptorconsists of subunits, and binding of ligand directly opens the channel, which is an integral parts of the receptor complex (see Figure 22–6). These channels are insensitive or only weakly sensi-tive to membrane potential. Activation of these channels typically results in a brief (a few milliseconds to tens of milliseconds) open-ing of the channel. Ligand-gated channels are responsible for fast synaptic transmission typical of hierarchical pathways in the CNS (see following text).

The second class of neurotransmitter receptor is referred to as metabotropic receptors. These are seven-transmembrane Gprotein-coupled receptors of the type described earily. The binding of neurotransmitter to this type of receptor does not result in the direct gating of a channel. Rather, binding to the receptor engages a G protein, which results in the production of second mes-sengers that modulate voltage-gated channels. These interactions can occur entirely with the plane of the membrane and are referred to as membrane-delimited pathways (Figure 21–2C). In this case, the G protein (often the βγ subunit) interacts directly with the voltage-gated ion channel. In general, two types of voltage-gated ion channels are the targets of this type of signaling: calcium channels and potassium channels. When G proteins interact with calcium channels, they inhibit channel function. This mechanism accounts for the presynaptic inhibition that occurs when presynaptic metabotropic receptors are activated. In contrast, when these recep-tors are postsynaptic, they activate (cause the opening of ) potassium channels, resulting in a slow postsynaptic inhibition. Metabotropic receptors can also modulate voltage-gated channels less directly by the generation of diffusible second messengers (Figure 21–2D). A classic example of this type of action is provided by the β adrenocep-tor, which generates cAMP via the activation of adenylyl cyclase . Whereas membrane-delimited actions occur within microdomains in the membrane, second messenger-mediated effects can occur over considerable distances. Finally, an important consequence of the involvement of G proteins in receptor signalling is that, in contrast to the brief effect of ionotropic receptors, the effects of metabotropic receptor activation can last tens of seconds to minutes. Metabotropic receptors predominate in the diffuse neu-ronal systems in the CNS .